Harry the Heron is hungry.

That’s because his favorite fishing hole is frozen over.  Here’s Harry’s dilemma:  does he search for thin ice and peck a hole into the surface of the ice-covered Creek to dip his long beak in and hopefully catch a fish?  Or … does he fly one mile East to the Detroit River where the current is swift and there is no ice?  A few weeks ago, he and his seagull buddies were feasting on shad.  Too bad those tiny fish could not be buried in hidey holes like the squirrels do with their peanuts and other treats they forage, because pickin’s are slim now.

The weather was even colder this morning … frigid in fact.  It was just 16 degrees (-8C).  Jack Frost had painted some designs on house and car windows and it was evident when the sun’s rays hit it just right … the second sunny day in a row and it made you kind of forget about the frosty temps.  Just like the plumes of smoke erupting from chimneys, I watched the trail of vapor from my own mouth as I walked along.

Grady was up and at ‘em this morning.  I put the peanuts on the porch and then went to finish getting dressed.  I got outside just on time to see him scurrying away and the little nut pile had gone down substantially.  He was apparently by himself this morning, having decided that the early bird does get the worm – you go Grady!!  I did, however, interrupt his nut-gathering-and-munching  agenda, when I suddenly appeared from around the corner of the house and went to open the garage door to run the car.  He took one look at me, then he ran up into the neighbor’s tree.  I told him I didn’t realize I looked so scary and furthermore not to be a “fraidy cat” since I was not going to hurt him.  After dispensing my wisdom, I disappeared into the garage and from the car’s rear-view mirror, I watched him approach … slowly, deliberately, then he picked up speed to grab a peanut and then he ran away again.  I’ll need to ramp up the assertiveness training for this cutie pie in the weeks ahead.

All the photos in this post are from Sunday’s stroll.  The scene was the same this morning – the Creek was still frozen over and the ducks congregated under a tree, huddling together on an old log to keep warm.  Since I first started walking at Council Point Park, the ducks would go under the sewer drain which is beneath the cement ledge you see when I take pictures of the heron fishing from there.  The water did not freeze under the drain and provided some respite from the bitter cold.  But, due to all the rain we had this year, the water level is too high to accommodate the mallards – they’d be hitting their heads, so there is no shelter for them now.

The ice on the surface of the Creek looks like a cracked mirror in some places, or smooth as glass in others.

The reflection of the trees on the ice made it quite picturesque. 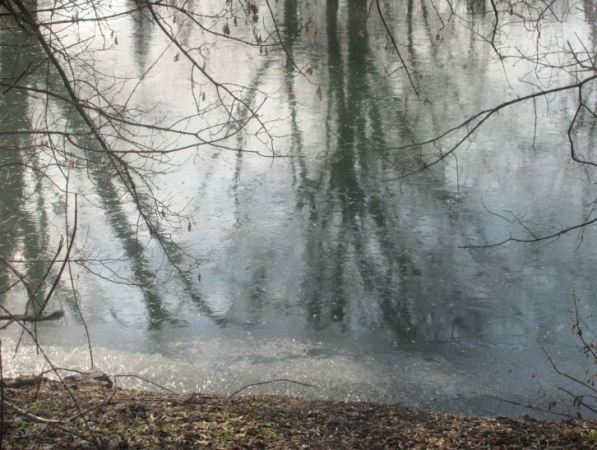 We keep the cold a few more days and by the end of the week, snow may be arriving just in time for the weekend.  Well, maybe that snowstorm will fall apart – fingers crossed!

This is my first blog and I enjoy writing each and every post immensely. I started a walking regimen in 2011 and decided to create a blog as a means of memorializing the people, places and things I see on my daily walks. I have always enjoyed people watching, and so my blog is peppered with folks I meet, or reflections of characters I have known through the years. Often something piques my interest, or evokes a pleasant memory from my memory bank, so this becomes a “slice o’ life” blog post that day. I respect and appreciate nature and my interaction with Mother Nature’s gifts is also a common theme. Sometimes the most-ordinary items become fodder for points to ponder over and touch upon. My career has been in the legal field and I have been a legal secretary for four decades, primarily working in downtown Detroit, and now working from my home. I graduated from Wayne State University with a degree in print journalism in 1978, though I’ve never worked in that field. I like to think this blog is the writer in me finally emerging!! Walking and writing have met and shaken hands and the creative juices are flowing once again in Walkin’, Writin’, Wit & Whimsy – hope you think so too. - Linda Schaub
View all posts by Linda Schaub →
This entry was posted in Uncategorized and tagged ice, nature, walk, walking, Winter. Bookmark the permalink.

35 Responses to Harry the Heron is hungry.