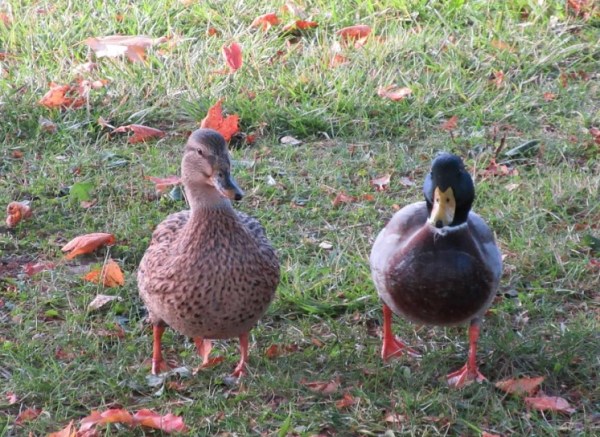 There are only ten days left in October, so I decided I’d better visit Heritage Park and catch some of the colors, before wind gusts and/or rain stripped the leaves from the trees, leaving them bare and boring looking.

So, off I went to do some leaf peepin’ and get some miles walked as well in this very scenic park.

Now, I suppose I could have used this panoramic shot below as today’s blog post cover photo.  After all, it is representative of Autumn here in Michigan, as it shows off those beautiful trees at their color peak, all ablaze in red, yellow and orange.

But, today is Sweetest Day after all, so I decided that this male and female mallard would grace this Sweetest Day blog post.  I watched the pair for several minutes as they interacted with one another, following each other around, or walking companionably side by side, and then they were gazing at each other so intensely, I knew Mr. and Mrs. Duck would be the blog post photo today.

It was still a little chilly when I arrived at the Park at 9:00 a.m., and I had decided to leave behind my coat and gloves at home today since I was leaving later and I thought the sun would have warmed things up, but it had not, and it sure was difficult to take pictures with frozen fingers.  But, I survived, and after 3/4s of an hour walking around the village, I was pleasantly warm. 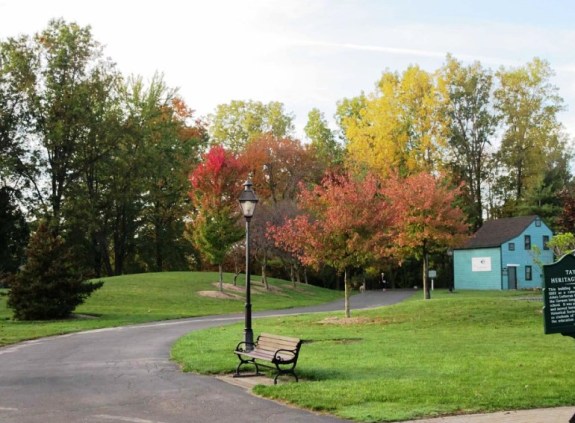 Heritage Park was packed with walkers and there were many dog walkers.  There were several professional photographers making memories for families as he posed them in popular places like the covered bridge, or in front of Coan Lake with the fountain in the background.  I guess some of these shots will eventually turn up as holiday cards.  Many of the historical buildings were closed as they were undergoing renovation, with most getting new roofs.

The view at Coan Lake was missing one very conspicuous building, and it would have been obvious to me, even if I hadn’t read yesterday that the gazebo was razed and a new one will appear shortly in its stead.

I went through the village twice, taking some photos, then put the camera away and started out on the trail around the Park.  I did that 1.2 mile trail three times and was pooped when I finally got back to the car.

I had a few errands to run after my walk, and checked the pedometer once I was home, and I went just a hair under six miles.  It was a gorgeous day, with the promise of an equally beautiful Fall day again for tomorrow.