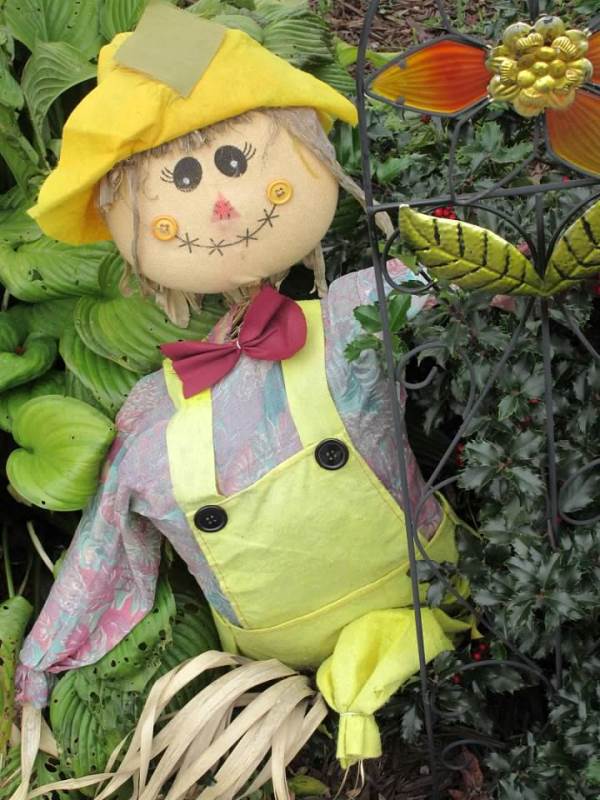 I know what you’re thinking … Linda planned her day just so she could use alliteration in her headline.

Nope, if I was to pick a headline, a better one would be to borrow Gordon Lightfoot’s lyrics “the gales of November came early” from the song “The Wreck of the Edmund Fitzgerald”.

After yesterday’s afternoon and evening of rain and sleety, wintry-like mix, I awoke to temps that nose-dived to a real-feel in the 20s, and a stiff North wind blowing at 15 mph.  A trip to traipse around a pumpkin patch and any unpaved trail seemed out of the question.

I decided on Heritage Park and trying out another pumpkin patch, just a hop step and a jump from that park.  I scoped out the grounds on Google and it didn’t require tromping around in a field, so off I went.  This year I believe I’ve lost my sense of adventure in less-than-ideal walking conditions and I’ll blame my attitude on Mother Nature!

Heritage Park is always a delight to visit, especially in bright and sunny weather.  Its picturesque village and scenic walking path, that winds around the entire venue, is excellent for racking up walking miles and getting some nice photos.  Today not so much.

I wanted to head to this venue to view the colorful foliage, and, although Heritage Park never disappoints, this morning was a dark and gloomy day.  I timed my arrival to coincide with the man who brings the cracked corn daily to feed the ducks, but I saw no sign of him and the waterfowl were rather scarce today as well.

I did take a few pictures that are included in this post.

However, exactly one year ago today I spent a morning at Heritage Park and captured some beautiful shots of the Fall foliage, as well as a male and female duck.  The pair looked so companionable that I figured Mr. and Mrs. deserved to grace that Sweetest Day 2017 post with their photo

I believe this may have been the same pair because, while I was standing by Coan Lake, a male and female mallard climbed out of the water and waddled over to one of the historic houses.  Just like last year, they seemed inseparable.

While today’s leaves were not as colorful as I may have liked, I noted that many of the trees had already dropped their leaves, no doubt from those 45 mph winds yesterday.

I liked these bright red maple leaves the best, and not just because I am Canadian.

Many other leaves were still wet and plastered against the walking path.

A touch of harvest décor made the Little Red Schoolhouse look festive, perhaps to welcome people at the recent open house where Heritage Park permitted tours of all the historical buildings.

I noticed some teeth marks in one of the pumpkins, the work of a squirrel, no doubt. 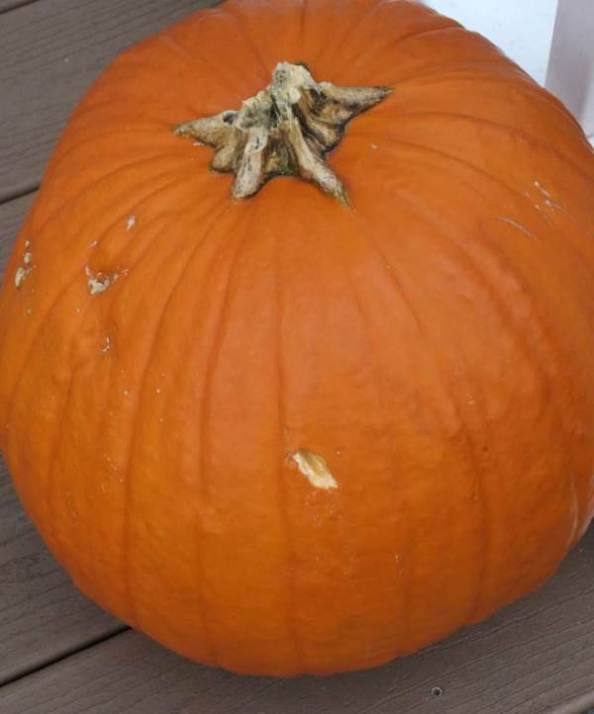 After multiple trips on the walking path that surrounds the park, plus an extra-long meander through the village area, I headed to the car.  As I crossed the parking lot a flock of geese flew overhead. 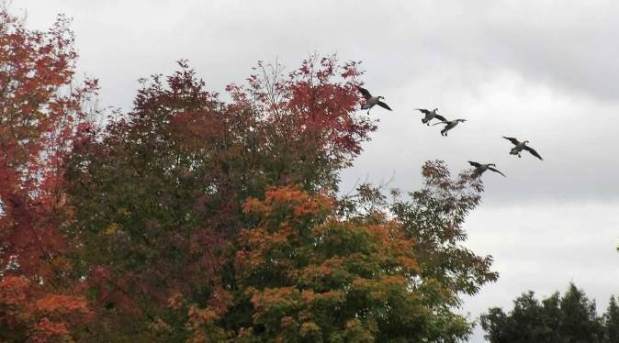 After considerable honking, I watched them come in for a landing.  They settled down close to where I had parked my car and the flock began grazing on the longish grass.  Soon a skirmish erupted with wing flapping and hissing between two geese.  I’m usually on the receiving end of all that venomous activity, perhaps having crossed the path way too close to them or their offspring.  I guess this fracas would be the equivalent of two fighters crying out “put up your dukes” because one was incited to fight.  The next thing I knew there was a ruckus as one goose rammed the other one in its side with its beak … yup, it “goosed” the other goose!  Unbelievably, mere seconds later, everyone went back to grazing with no hurt feelings nor apparent casualties.  This was the fractious goose, looking a might contrite here. 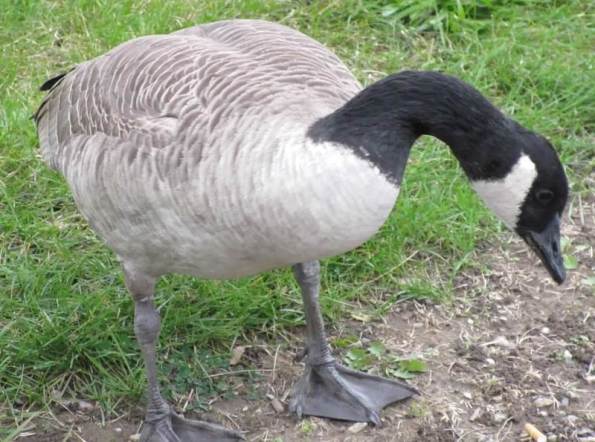 There were puddles everywhere on the path, and the parking lot was no exception as I watched a goose drink from a puddle to wash down that grass. 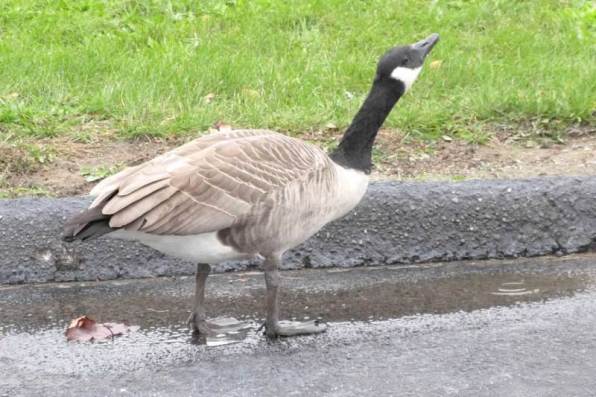 Looks kind of complicated drinking that way doesn’t it?  I wished I had a straw to offer him (or her).  Well, it was the pause that refreshes, as that waterfowl soon was goose-stepping away. 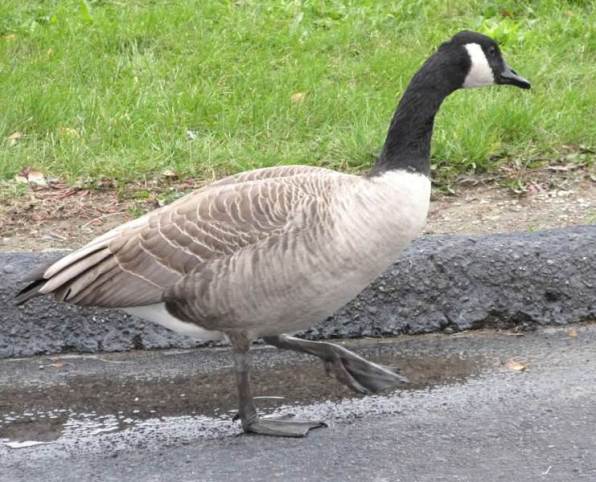 Earlier this week I planned to go today to Laroy’s Pumpkin Patch in Romulus.  It’s been years since I was there.  But this morning found me Googling and perusing an alternative.  Since Massab Acres was close to Heritage Park, I thought I’d stop in and try it out.  I figured if it was busy, I’d head to our City’s Farmer’s Market instead.

I picked a good time because I was the only one there.  I don’t imagine too many families were eager to be up and at ‘em to pick pumpkins on such a cold morning.  Massab Acres is actually a nursery, but they convert part of their space to a pumpkin patch and a spooky walk, which includes a “House of Frights” and some other creepy horrors.  Well, I’ve not been creeped out in a while, except for the last centipede I saw, so why not go to their Fall Harvest? 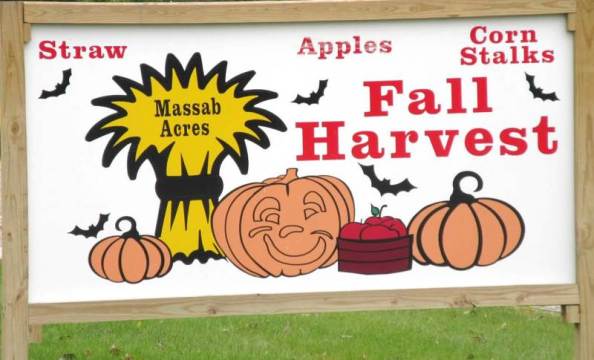 There was lots of harvest décor including straw bales, cornstalks and plenty of pumpkins which were mostly priced by the pound. 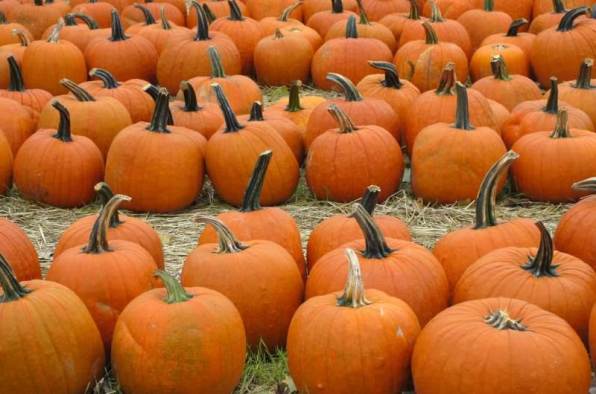 A group of them were gargantuan and misshapen as well – they’d probably take up most of your porch. 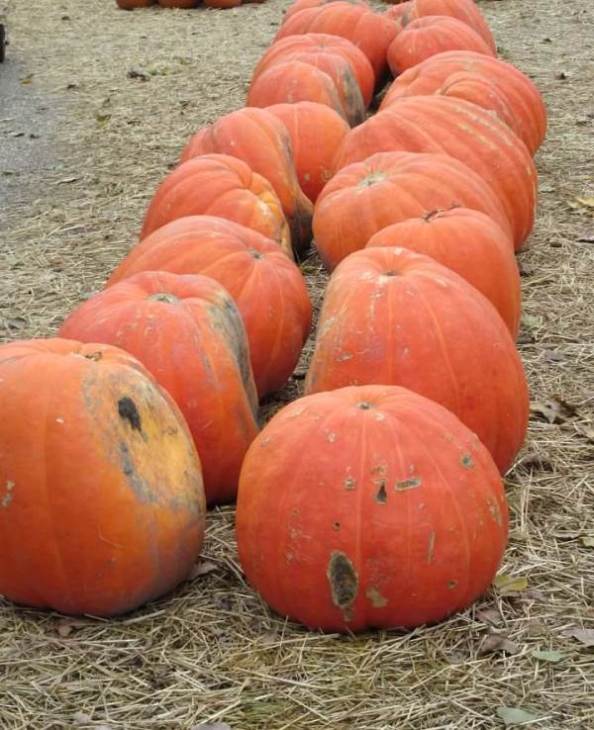 Yes, I resisted getting additional mini pumpkins for the squirrels; I strolled right past that bushel basket and paused instead to check out these colorful gourds. 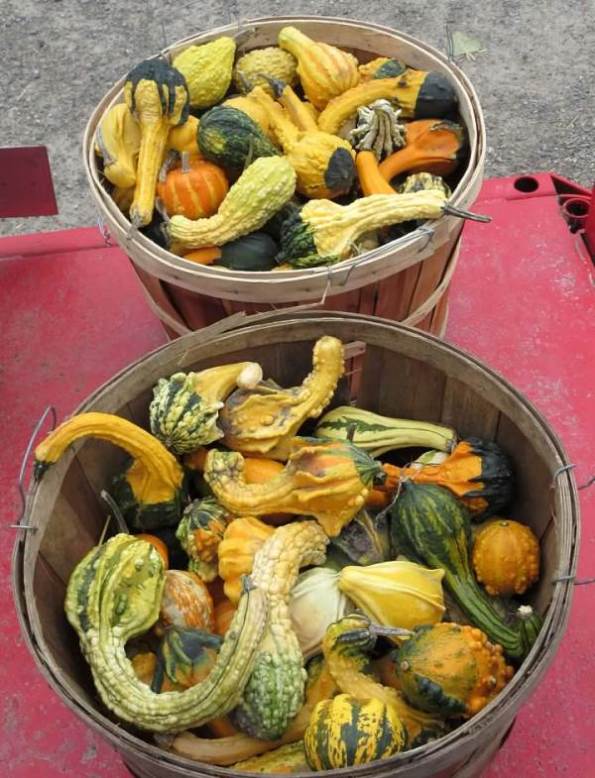 There was an abundance of beautiful mums; the purple ones were my favorite. 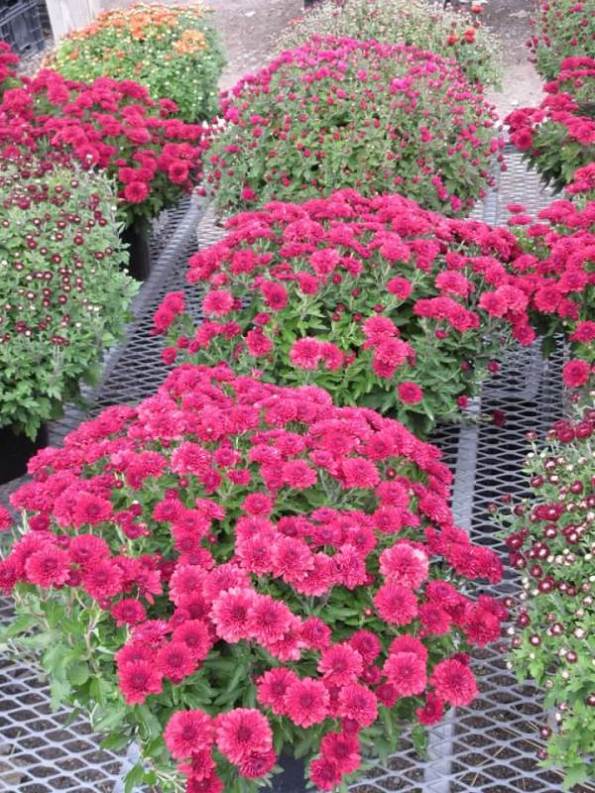 Taking a walk on the wild side.

As I’ve mentioned in previous posts, I embrace Fall’s colors and cooler temps, even though it means Winter is on the way.  I like Halloween, even though I don’t decorate for it.  Massab Acres had a Halloween display, so I ventured through the spiderweb-covered archway and went on the spooky walk.   I’m sharing some of the featured creatures on that trek. 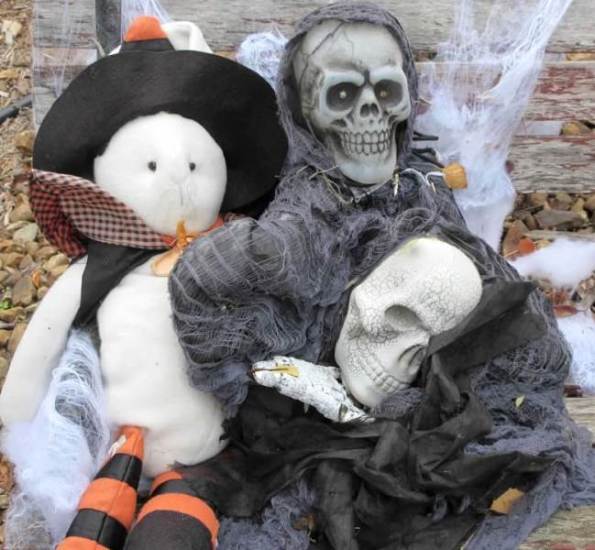 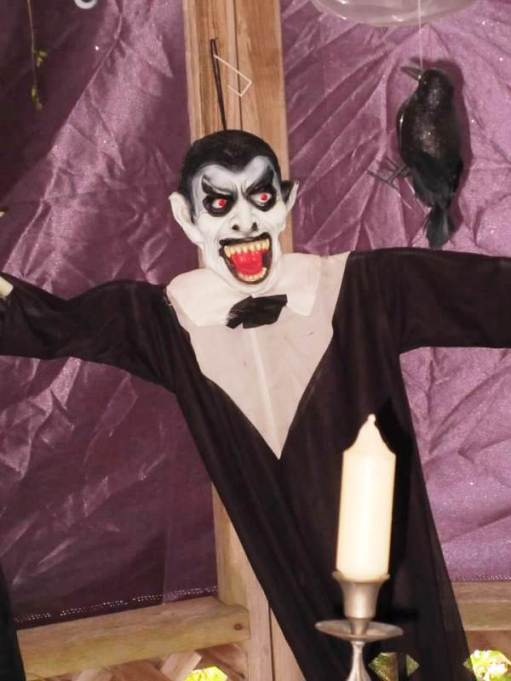 It wasn’t a picture-perfect day, but since every weekend seems to feature wild and wacky weather of late, I thought I’d better just get out and enjoy it and get my miles in.  I came home with red cheeks, a ton of pictures to pick through and six more miles under my belt.

This is my first blog and I enjoy writing each and every post immensely. I started a walking regimen in 2011 and decided to create a blog as a means of memorializing the people, places and things I see on my daily walks. I have always enjoyed people watching, and so my blog is peppered with folks I meet, or reflections of characters I have known through the years. Often something piques my interest, or evokes a pleasant memory from my memory bank, so this becomes a “slice o’ life” blog post that day. I respect and appreciate nature and my interaction with Mother Nature’s gifts is also a common theme. Sometimes the most-ordinary items become fodder for points to ponder over and touch upon. My career has been in the legal field and I have been a legal secretary for four decades, primarily working in downtown Detroit, and now working from my home. I graduated from Wayne State University with a degree in print journalism in 1978, though I’ve never worked in that field. I like to think this blog is the writer in me finally emerging!! Walking and writing have met and shaken hands and the creative juices are flowing once again in Walkin’, Writin’, Wit & Whimsy – hope you think so too. - Linda Schaub
View all posts by Linda Schaub →
This entry was posted in Uncategorized and tagged ducks, Fall, geese, Halloween, Harvest, nature, walk, walking. Bookmark the permalink.