Predators at the Park.

It was back to Council Point Park this morning, after an absence of just one day.  When I arrived, Parker was pacing, running back and forth on the pavement in the parking lot.  As usual, he raced over to see me, melting my heart when he put his front paws on my left shoe and gazed at me with such a plaintive look.  In one easy motion, with my left hand I unsnapped my jacket pocket and popped open the Ziploc bag, then fished the camera out of the other pocket with my right hand.  “Just peanuts today for you and your friends Parker” I told him.  “Number one, it is National Nut Day, and number two, you’ll get cavities if I keep feeding you cookies.”

I gave him a little pile of peanuts and he trotted off happily, with a pair of them clenched between his front teeth.  With a parting glance, he turned and looked me straight in the eye.  Hmm – was this his way of saying “thanks” or was he looking to see if any other squirrels were trying to steal his pile of peanuts he reluctantly left behind?

The not-so-friendly skies were bright-blue and hawk-free today.

Like Parker, I also glanced around, but for a different reason than my little buddy.  As I walked through the parking lot, my eyes scanned the skies, then the trees, because I remain on “hawk watch” for any predators that might swoop down on the squirrels while I am feeding them.   I’m still mindful of Stubby’s narrow escape from the Cooper’s Hawk in late Summer, but unfortunately, I cannot be there all the time.

I’ve often mentioned how Parker greets me once he sees me in the neighborhood across from the Park entrance.  Sometimes he follows me across the street when I leave to walk home.

He may often be found on this big rock where he’ll perch, using it as a lookout so I don’t miss him, thus ensuring he’ll get another load of peanuts.  He’s a pretty smart cookie! 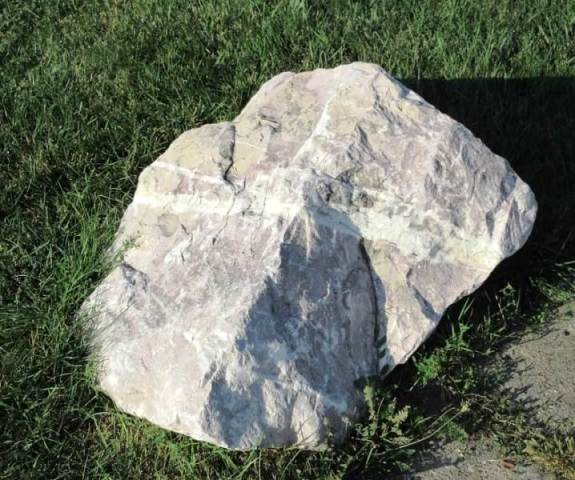 People often underestimate the intelligence of our furry and feathered friends.

People incorrectly give the nickname “bird brain” to our fine-feathered friends.  This is wrong, because birds are much sharper and savvier than you realize.  I know because I had pet birds for most of my life.  So, evidently a Cooper’s Hawk was watching the near-daily interaction between Parker and me on this street corner, because one day I was leaving the Park to head home and still had the camera in my hand.  I saw a bird alight on the top of the street sign near Parker’s rock.  My initial reaction was  “ouch” because those signs are metal and likely sharp and it could cut its feet.  The bird looked large and I thought it was a starling or even a crow.  I zoomed in and took a few shots.  When I uploaded the photos and studied them on the screen, I saw the bird was a Cooper’s Hawk.  Clearly it was waiting for Parker to come along.  I feel a little uneasy. 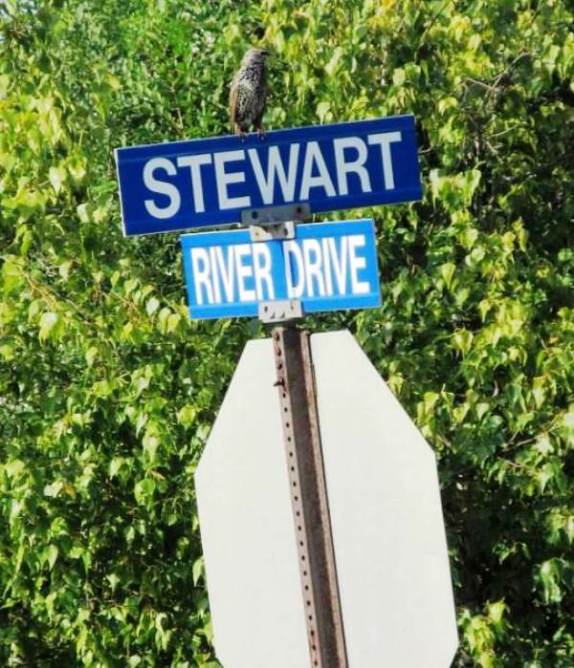 New to the area:  a furry, four-legged predator.

This morning I had another predator on my mind, not one of the winged variety, but a specimen that walks on four legs.  As I neared the pavilion area, I shielded my eyes from the sun and looked up and down the trail for a furry and four-legged predator.

Saturday, after I walked at Council Point Park, I continued on my trek to the City of Wyandotte to take photos of the harvest and Halloween décor at the stately homes along Emmons Boulevard.  I was just past the City limits, enroute to my house, and knew I’d not be taking any more pictures, so I put the camera away.  That was a dumb move on my part, as a few minutes later I saw something large streaking by me out of the corner of my eye.  I turned to find a coyote running near the fence on the corner house at Emmons Boulevard and Electric Avenue.  I know I did a double take and my mouth was a large “O” and by the time I got the camera out of the case, turned on and focused on that coyote, it was a half-block away.  I managed to get one shot, albeit of his back and tail.

He ran over to the grounds of a large church a block away and disappeared into that neighborhood.

I didn’t run from that coyote, although I had no clue whether it would attack a human, and I did think he was pretty lean looking.  I went over to the church area but he was gone.  When I got online later that day, while uploading my photos, I Googled around to read up on coyotes, specifically if they would confront humans, and also, if squirrels were one of their food choices.  I learned coyotes shy away from humans, unless they are rabid, or if they are very hungry and there is a food source around a home and then they get a little braver and venture closer.  Sadly, squirrels are on the coyote’s menu.

I checked on our City’s crime site on Facebook to see if anyone reported seeing a coyote .  This crime forum encompasses many newsworthy items like traffic congestion/ accidents, broken water mains, missing pets, burglaries, and most recently, last week’s murder in our city.

Sure enough, several people reported seeing a coyote in Wyandotte (as you see in this photo I took from the Facebook crime site), then in Lincoln Park, right at Stewart and River Drive, at the site of Council Point Park.

Truly, there’s nowhere for a coyote to live at Council Point Park.  It has a woodsy feel with the trees and bushes that line the Ecorse Creek and run parallel to the walking path, but it is right in the middle of a residential neighborhood.  I can’t put a Google map photo here due to copyright issues, so have a look at this link here

The area of trees to the right of where it says “Council Point Park” are on the other side of the Ecorse Creek.  Thus, I don’t think a coyote would be inclined to make a home at this venue, but I’ll still be wary for myself and the squirrels.  This morning I walked along the perimeter path, glancing toward the water where I saw the heron standing on a log, near some ducks.  It was a peaceful and idyllic scene, and part of a nature nook highly unlikely to be home to hawks and coyotes … at least I hope so.  A fellow blogger told me the squirrels run faster than the coyotes – hopefully the squirrels don’t get too roly-poly and can only waddle. 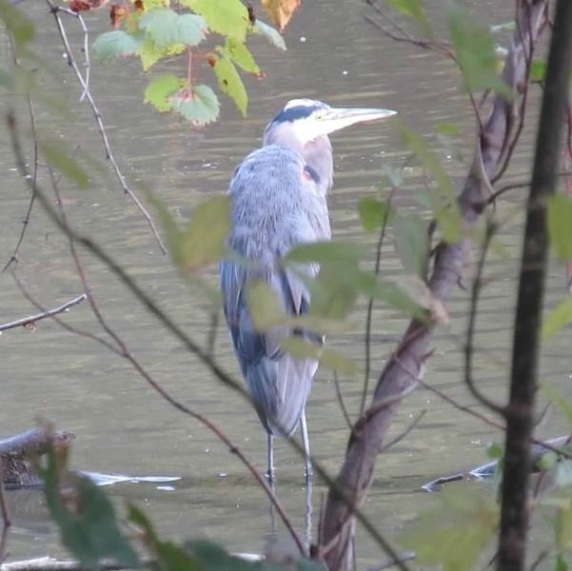 I paid for a Metropark pass to go to larger parks to check out “wild things” and just a mile from home, there was a coyote loping along without a care in the world.  I’ve only seen pictures of them in the past, and oh yes …  the cartoon character Wile E. Coyote.

This is my first blog and I enjoy writing each and every post immensely. I started a walking regimen in 2011 and decided to create a blog as a means of memorializing the people, places and things I see on my daily walks. I have always enjoyed people watching, and so my blog is peppered with folks I meet, or reflections of characters I have known through the years. Often something piques my interest, or evokes a pleasant memory from my memory bank, so this becomes a “slice o’ life” blog post that day. I respect and appreciate nature and my interaction with Mother Nature’s gifts is also a common theme. Sometimes the most-ordinary items become fodder for points to ponder over and touch upon. My career has been in the legal field and I have been a legal secretary for four decades, primarily working in downtown Detroit, and now working from my home. I graduated from Wayne State University with a degree in print journalism in 1978, though I’ve never worked in that field. I like to think this blog is the writer in me finally emerging!! Walking and writing have met and shaken hands and the creative juices are flowing once again in Walkin’, Writin’, Wit & Whimsy – hope you think so too. - Linda Schaub
View all posts by Linda Schaub →
This entry was posted in Uncategorized and tagged nature, Park, walk, walking. Bookmark the permalink.

50 Responses to Predators at the Park.