… when I hightailed it to Heritage Park in Taylor for my walk this morning.  This is a beautiful park about six miles from where I live.  I finally visited Heritage Park for the first time last Summer after driving past it for years.  What a treat it was!  I am including my blogpost from last August, because the photos I took on today’s trip really don’t showcase the peace and beauty of this park in its Summertime glory:  https://lindaschaubblog.net/2017/08/26/meandering-with-mallards-and-memories/

By the time I arrived today, there were some stunning sunbeams illuminating Heritage Park, so I’d say my timing was impeccable, as it had been cloudy when I left home.

I parked the car and headed over to the historical portion of Heritage Park, as I wanted to feed the ducks and take some pictures of them first.

What a surprise to find most of the manmade lake, known as Coan Lake. covered in ice!  I should have thought of it, since the Ecorse Creek at Council Point Park, has been iced over all week.

A wooden covered bridge bisects Coan Lake and on one side it was nearly frozen over.  In the 30-degree temperature, many seagulls were roosting or walking around on the surface.

On the other side of the bridge, there were many frozen portions, but along the edge the ducks were able to paddle around.

I had taken crackers with me since they were such a draw at the water front last Sunday.  I tossed out a few handfuls, this time remembering to take out the camera out and have it ready.  Well, I might have been ready for those ducks and a few geese which lingered around the water’s edge, but instead, the seagulls from the other side immediately zipped over my head, screeching and carrying on.  Those seagulls must have good eyesight, that’s all I can say.

I took the rest of my treats and headed over to the covered bridge so the ducks would get a fair share and since I wanted some photos of them.  I threw out the crackers and watched them gathering from underneath the covered bridge – it was a safe place to be as the seagulls were crisscrossing the sky overhead, as if I’d handed out fish tidbits or even Goldfish crackers.

Some of the ducks preferred to stay far away from the fray that ensued, content to concentrate on preening themselves or catching a few extra ZZZZZs.

I had to keep putting the camera away as my bare fingers, in those fingerless gloves, were very cold.  Like those few mallards who strayed from the maddening crowd, I likewise enjoyed the idyllic setting.

There were quite a few mallards on the grassy area by the water’s edge.  I guess they grew tired of slipping and sliding on the icy surface, and I could sure identify with them, having endured that three days of ice-slickened sidewalks and driveway every morning when I went out to run the car.  It was downright treacherous for me.  I had to smile as I watched a few of them waddling across the ice.

But, on land, there was this one mallard who not meandering, but  strutting his stuff along the path to the bridge, and he looked comical, so I grabbed the camera once again and had to just deal with the frozen fingers, occasionally blowing on them to keep them warm.

This mallard was giving me the side-eye!

I think his mate was nearby.  When I reviewed my photos, though I liked this image of Mrs. Duck, whatever was on her nose?

The seagulls hung around, probably waiting for another handout, but I had taken the rest of the bag of treats when they were scarfing down the first batch, and I fed the ducks behind their backs.

So, that means dear seagulls, the joke’s on you, even though it looks to me these seagulls were enjoying a private joke. 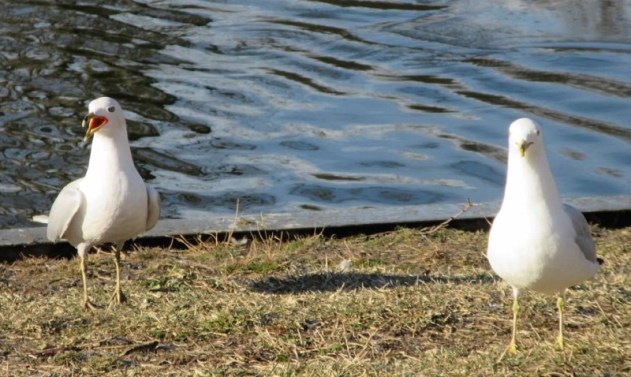 A slew of ducks was playing tag by one of the historical buildings, and one was lagging behind.  This mallard apparently didn’t notice me standing there as he ran as fast as his legs could carry him right in front of me.  Was he looking for his playmates, or running late to dine on corned beef and cabbage?

I follow Heritage Park’s happenings on Facebook and checked out the new gazebo that was built last Fall.  The gazebo is a popular setting for prom, homecoming and even wedding photos.   In the background is the little red schoolhouse and mill and the gulls are flapping around on the ice.

I heard a Canada goose honking like crazy as it prepared to land smack in the middle of the ice-covered lake.  I thought to myself “this ought to be interesting … can it see it is not water, but ice?”  I watched its slow descent and it suddenly smashed down onto the ice, sending pieces skittering across the frozen surface and making a huge splash in the cold water.  The seagulls jumped back in surprise as the goose paddled in his own little pool of water.

I took a trip around the perimeter of Coan Lake, camera in hand, and couldn’t resist taking some photos of a pair of geese, who first were walking side-by-side companionably, then one had a hissy fit with its friend or mate, just as the seagull was streaking by and photobombed the shot.  (Note the hissing and the pink tongue in the first photo, then the lowered head and more of the hissing in the next photo.)  The hissing histrionics went on for several minutes, and I wanted to interject myself into the fracas to say “can’t we just agree to disagree and not get so huffy?”

They finally got over their squabble and waddled off, and so did I, er … strolled off in the opposite direction.  I took several trips around the historical part of the Park, then I went two complete laps of Heritage Park.  I was tired and hungry by the time I got to the car, and by then, the car was warm and toasty as it was 40 degrees out.  Finally my fingers thawed out and I drove off, five miles of steps taken and a mess of photos just waiting to be uploaded once I got home.

It was an enjoyable morning at Heritage Park; I hope you had a spring in your step on this St. Paddy’s Day as well!

This is my first blog and I enjoy writing each and every post immensely. I started a walking regimen in 2011 and decided to create a blog as a means of memorializing the people, places and things I see on my daily walks. I have always enjoyed people watching, and so my blog is peppered with folks I meet, or reflections of characters I have known through the years. Often something piques my interest, or evokes a pleasant memory from my memory bank, so this becomes a “slice o’ life” blog post that day. I respect and appreciate nature and my interaction with Mother Nature’s gifts is also a common theme. Sometimes the most-ordinary items become fodder for points to ponder over and touch upon. My career has been in the legal field and I have been a legal secretary for four decades, primarily working in downtown Detroit, and now working from my home. I graduated from Wayne State University with a degree in print journalism in 1978, though I’ve never worked in that field. I like to think this blog is the writer in me finally emerging!! Walking and writing have met and shaken hands and the creative juices are flowing once again in Walkin’, Writin’, Wit & Whimsy – hope you think so too. - Linda Schaub
View all posts by Linda Schaub →
This entry was posted in Uncategorized and tagged ducks, geese, humor, nature, Park, seagulls, walk, walking, Winter. Bookmark the permalink.