Friday morning we awoke to snow.  There was only one inch of slushy snow that adorned the grass, bushes and trees.  It looked very pretty.  It didn’t stay on the pavement so I could walk.  By afternoon, it had all melted; that is my type of snow, the kind that quickly vanishes.

This morning I peered out the door before leaving for my walk.  Some snow must’ve fallen overnight, as it looked like Mother Nature sifted her icing sugar over the grass.  That snow sure wasn’t going anywhere for a while, at 25 degrees with a real-feel of 18 degrees.

I headed down to Council Point Park where Parker and four of his friends greeted me before I even reached the pavilion area.  I know I missed three days of walking here this week due to the rain, wind and snow.  Two of those days I just walked in the neighborhood.  So my furry friends sure were anxious for their treats.  I spread out quite a few peanuts for them, then saw fellow walker Joanne, so we walked two laps together.  Our mouths were going a mile a minute, while catching up since last time we chatted, and I kept stopping to feed more squirrels along the way, but admittedly did not give them the sweet talk that I usually dispense with their peanuts.  There were no cardinals this morning and I showed Joanne the bag of safflower seeds I was toting and told her I was hopeful to lure them to the ground for some photo opportunities.  She had arrived earlier than me this morning, so after she left, I went back and walked the “wild life” loop and lavished more attention to the squirrels who, once again, came running right over with the same pent-up energy as earlier in the morning.

It was bitter cold for April 7th.  While the sun was welcome, it didn’t do much to warm me up.  Despite the cold weather, the maples and elms continue their budding process causing the pollen count to rise as to these trees. 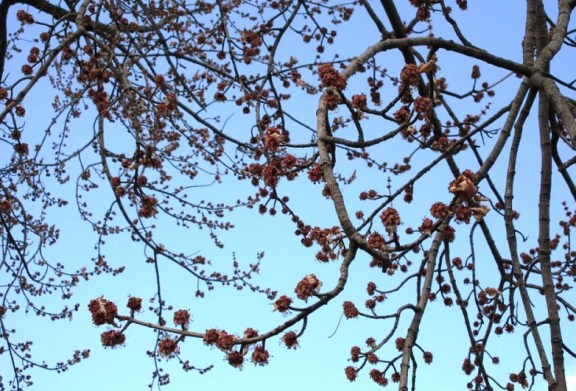 The maple blossom buds continue to litter the sidewalks as you see.  Earlier in the week I was sneezing my head off, but not so bad today.

I was on my way home, scuffing through all the maple tree debris, when I heard a peculiar noise high up above.  At first I thought it was a bird in distress, but instead it was a black squirrel crouched on a branch and peering down at me. 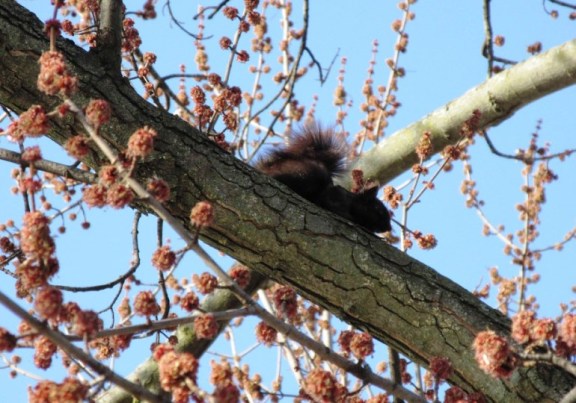 He was pure black, save for his tail which had a tinge of red to it, not unlike the color of the red buds in the tree where he was perched.  He was swishing that tail back and forth while mewling and he reminded me of a cat.

It made me a bit uneasy.

Did he perceive me as a threat?  Was he hurt?  I didn’t see anything that could be terrorizing him like a cat or a predator bird, and I sure wasn’t going to do him any harm.  In fact, I see this black squirrel twice a day when I pass under this tall tree when walking to the Park.  I talked to him in a soothing voice, but the cries continued.  I stood there, waiting to see if he would come down to ground level after I scattered some peanuts on the sidewalk.  Nope – he continued making his crying sounds and stayed put.  I didn’t like hearing him do that as I didn’t know if he was hurt, though I couldn’t see anything with my naked eye, or even when I zoomed in close with the camera.  Since I wanted to get a photo of the tree in bloom anyway, his presence just made the photo complete.  I left him to continue my trek home, but couldn’t get him out of my mind the rest of the trip.

Of course once I got online you know I HAD to Google “distress calls by black squirrels” to see if that was the norm or not.   I’ve heard squirrels chattering to one another, or to me, and this was not a normal squirrel utterance.  I found many sites which mentioned the distress calls of various types of squirrels, describing them as a cry, or even a bark.  Here is a video depicting the exact noise I heard:

I hope he was okay after I left.

Since it is “National No-Housework Day” today, I gave myself a break and lingered a little longer on my walk, giving me a smidge over five miles.

This is my first blog and I enjoy writing each and every post immensely. I started a walking regimen in 2011 and decided to create a blog as a means of memorializing the people, places and things I see on my daily walks. I have always enjoyed people watching, and so my blog is peppered with folks I meet, or reflections of characters I have known through the years. Often something piques my interest, or evokes a pleasant memory from my memory bank, so this becomes a “slice o’ life” blog post that day. I respect and appreciate nature and my interaction with Mother Nature’s gifts is also a common theme. Sometimes the most-ordinary items become fodder for points to ponder over and touch upon. My career has been in the legal field and I have been a legal secretary for four decades, primarily working in downtown Detroit, and now working from my home. I graduated from Wayne State University with a degree in print journalism in 1978, though I’ve never worked in that field. I like to think this blog is the writer in me finally emerging!! Walking and writing have met and shaken hands and the creative juices are flowing once again in Walkin’, Writin’, Wit & Whimsy – hope you think so too. - Linda Schaub
View all posts by Linda Schaub →
This entry was posted in Uncategorized and tagged nature, Park, Spring, Squirrels, walk, walking. Bookmark the permalink.