The Early Bird Catches the Worm.

Saturday began with a soggy start and the entire day was nothing special weather-wise.  I just walked in the ‘hood and decided not to write a post about it.

But today was a different story.  There’s nothing like bright sunshine to start your day off right – that sun even made me forgive Mother Nature  for making it downright cold on April 29th.  The pointer of the thermometer on my neighbor’s deck hovered right at the freezing mark when I left the house this morning.  Of course, it could be worse – to put it into perspective, the weatherman told us the western part of New York was getting lake-effect snow.

I shed a couple of articles of clothing, but was reluctant to get rid of the hat and fingerless mitts, so just 7 ½ different items as I swapped the knit hat for a knitted headband instead.

My first destinations were at the Detroit River to two different parks.  I saw no sense in driving to Heritage Park or Elizabeth Park, as beautiful as those two venues are, because the trees have not leafed out and there is nothing much to see there now … I’ll give it a few more weeks and visit then.

First, I headed to Bishop Park in Wyandotte.   As I neared the marina, I saw many pickup trucks with boat trailers lined up along Biddle Avenue, so I knew I was not going to be the first one at the riverfront.  I saw the cabin cruisers and luxury boats still shrink-wrapped and up on blocks … those boat owners are not going to put their pride and joy into the slips in the still-cold water.

Talk about the early bird catching the worm – those fisherman likely beat me by an hour as you see above.

A breeze was blowing and it was quite chilly at the waterfront.  There were several men standing or sitting on stools, bundled up in wool caps and gloves and Winter coats, as they patiently sat, poles in hand or propped up against the railing, hoping for a bite.  Still other fisherman were out in their boats or fishing along the smaller pier. 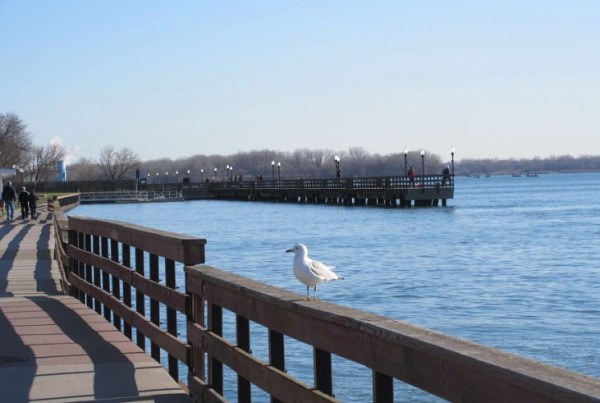 I chatted with a few of them as I strolled along the water’s edge and some already had caught a few fish.  They told me the walleye were running.  The water sparkled as the sun hit it.  I walked a half mile, then drove over to Dingell Park.

I had the same peaceful feeling at John Dingell Park, or Ecorse Park as it is also referred to.   I knew it was too early for the swans to have cygnets as the ones at Council Point Park were just building a nest last week and the eggs take six weeks to incubate, so this was just a mallard meet-and-greet event.

Just like at Bishop Park, fisherman likewise lined the pier, hopeful for a bite.

I know who did get a bite, and that was the ducks who were by the pavilion where I stationed myself with a cellophane bag of oyster crackers.  I like using them because they float on the top of the water, so none get wasted.   The three early bird mallards who were nosing around the reeds for breakfast got an unexpected treat and they honed right in and proceeded to gobble them up.  Oddly enough, no other ducks joined them. 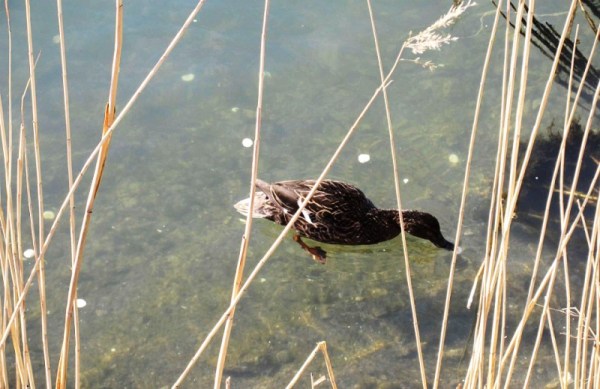 See … the early bird catches the worm also works well in this instance.  Those mallards had their ducks in a row this morning, didn’t they?

The seagulls, those scavengers that ruin every food fest at the river’s edge, must have been snoozing since the mallards got about ten minutes of good eating before the first seagull flew in to join the party at the river’s edge.

One seagull tried balancing on the water to eat some crackers, but he made an ungraceful swoop, got all wet, so he and his wounded feelings beat a hasty retreat shortly after this photo was taken.

The seagulls buzzed and swooped for a few minutes then departed – someone on the boats must’ve had goodies as I saw them hanging around way down the river.  One hanger-on kept looking at me hopefully in case I had more treats. 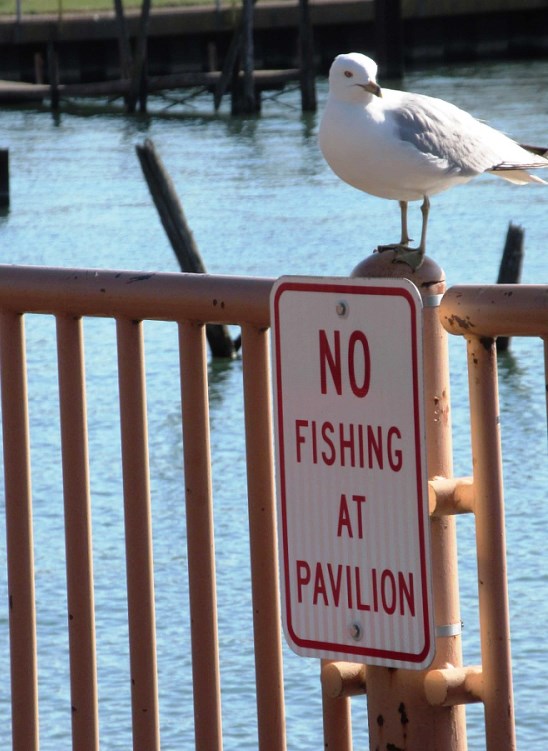 I walked the waterfront twice for about another 1/2 mile then got in the car and drove to Council Point Park.

The grass had really greened up since I was there on Friday and a few more of those seedlings and saplings have leafed out, but it is not a grand show of color yet.  I saw some dandelions, but that is about all.

The squirrels, led by Parker, came running over like we were long-lost friends.  I chastised them for not coming over to see me on Friday and said “I didn’t punish you by not showing up yesterday, but instead I walked in the ‘hood and fed the ‘hood squirrels.”  They made no apologies, and neither did I, but as they circled around me I had a flashback wherein I felt like Ms. Montie, the children’s librarian at the Lincoln Park Library eons ago.

By the time we moved here from Canada, I was well past the age of being read to by Ms. Montie, but  I can remember going to the library to do research for book reports and term papers, and there was Ms. Montie, her glasses hanging down on a string, resting on her ample bosom, and her knitted shawl wrapped loosely around her shoulders.  She “held court” by sitting on a small stool while the kids sat on equally squat stools, so she was always at eye level with her charges.  Once everyone was quiet and stationed in their seat, she put on her glasses and begin to read a storybook.  She would tell that tale with animation and fanfare much to the delight of the little children.  So, I likewise commanded the attention of at least ten squirrels at one time today.  Everyone who walked by me remarked on the crowd of squirrels I had today.  I told those walkers that half my allowance goes for peanuts so they’d better be showing me some love!  I dispensed peanuts for a while and when everyone was satisfied, I headed off to walk, the main reason I was there after all.  The first two venues were mostly for photos, although I can’t resist a cute squirrel pose, so here are a few from Council Point Park. 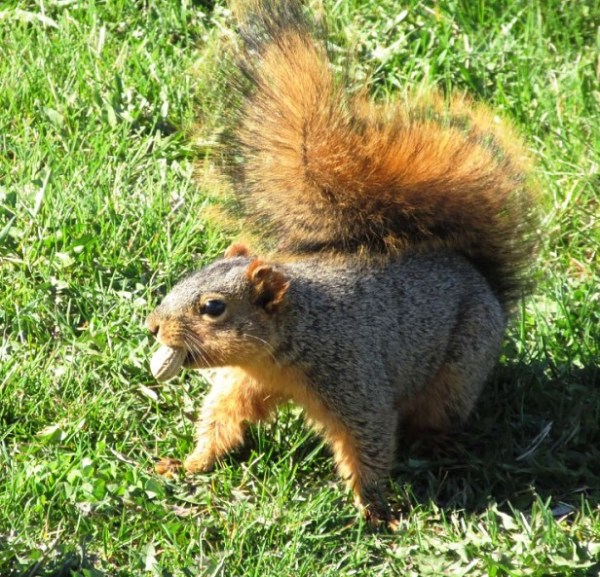 A gaggle of geese were grateful for the grass that is fast becoming lush and they were in their glory as they nibbled delicately on the tender blades. 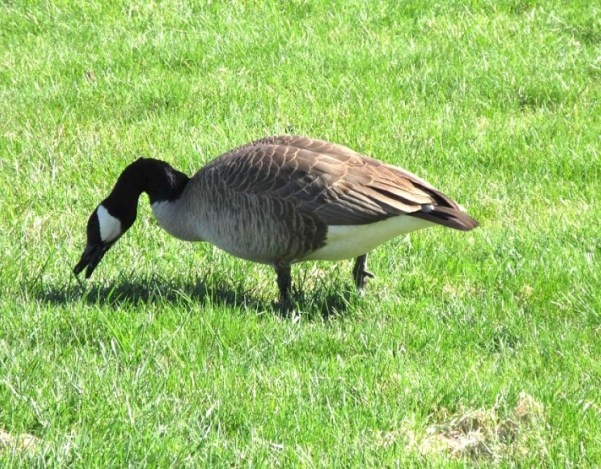 Today the group of about eight geese seemed unfazed as I rounded the bend, and there was no hissing or histrionics like Friday when I was treated to the pink tongue and wing flapping when all I did was stroll by. 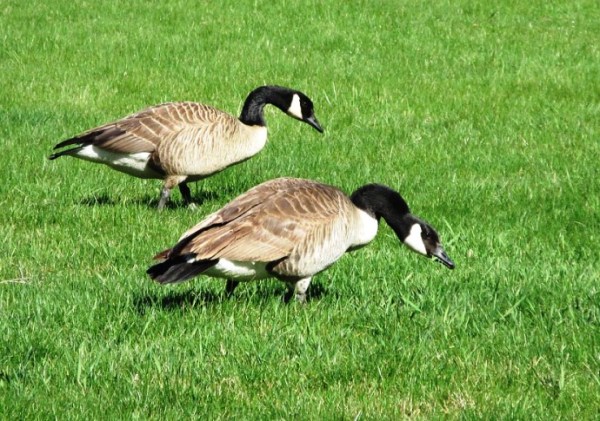 As I passed the cement landing, a pair of geese were standing at attention.  I don’t know whether they were soul searching or merely sunbathing, but they looked deep in thought. 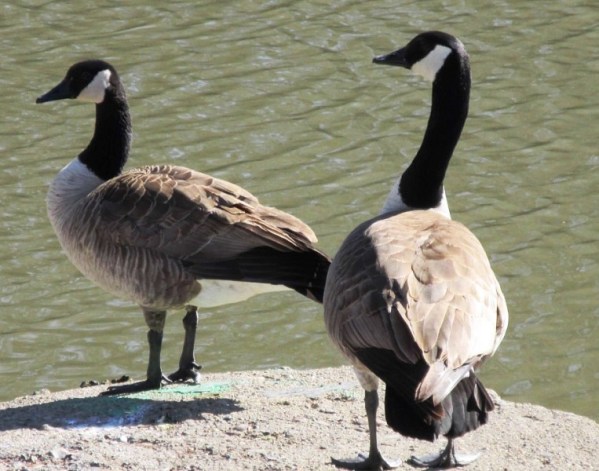 They posed this way and that as I watched them, happily clicking shot after shot, then suddenly they must  have had some secret code because there was one honk and in a flurry they were off.

Next, I heard a red-bellied woodpecker, and, for the first time ever, I was able to get a picture of one of these beautiful birds as he drilled into the tree.

I often hear the woodpeckers at the Park and I’ll glance up in the tree and see that red patch on the back of the head jerking back and forth while it taps away in staccato-like movements.  I gazed up at that tall tree and this little guy sure was gathering no moss as he moved from one side of the tree to the other, trying to find a fresh place to drill.  No wonder he had such a difficult time finding a drilling spot if you take a close look at the tree and its decay and how it is already riddled with “drill holes”.

Here he is giving me the side eye as he perches in the decayed wood.

Also included in the miscellaneous and sundry array of birds on this Sunday morning were a cardinal, red-winged blackbird and a heron.  This trio needs to remain as images in my head because as I caught sight of each of them, I had squirrels dancing around my feet and standing on their haunches for more peanuts, and, having only two hands, I couldn’t take a picture and dispense peanuts simultaneously, so something had to give.   There will be plenty of opportunities for photos, once I don’t need to fumble with gloves and can access the peanuts more readily then digging into the Ziploc bag each time.

Both the cardinal and the red-winged blackbird flew down from their respective trees to snatch a peanut I’d put out for the squirrels.  The heron got spooked as I walked past and was giving him the once-over while trying to determine whether that grayish blob in the tree was a bird or part of the tree.  He answered my unspoken question when suddenly the tree moved and all I saw was a grayish underbelly and a wide wingspan as he took flight.

Perhaps heading out the door on this frosty morning was not for everyone, but it was a perfect outing and a chance to get lots of  pictures to share in this post, plus I reached 251 miles walked so far in 2018.  Now, I only have 800 miles more to reach my goal by year end.  Whew!

So maybe the early bird really does catch the worm after all.

This is my first blog and I enjoy writing each and every post immensely. I started a walking regimen in 2011 and decided to create a blog as a means of memorializing the people, places and things I see on my daily walks. I have always enjoyed people watching, and so my blog is peppered with folks I meet, or reflections of characters I have known through the years. Often something piques my interest, or evokes a pleasant memory from my memory bank, so this becomes a “slice o’ life” blog post that day. I respect and appreciate nature and my interaction with Mother Nature’s gifts is also a common theme. Sometimes the most-ordinary items become fodder for points to ponder over and touch upon. My career has been in the legal field and I have been a legal secretary for four decades, primarily working in downtown Detroit, and now working from my home. I graduated from Wayne State University with a degree in print journalism in 1978, though I’ve never worked in that field. I like to think this blog is the writer in me finally emerging!! Walking and writing have met and shaken hands and the creative juices are flowing once again in Walkin’, Writin’, Wit & Whimsy – hope you think so too. - Linda Schaub
View all posts by Linda Schaub →
This entry was posted in Uncategorized and tagged ducks, Fishing, geese, humor, nature, Park, Riverfront, seagulls, Squirrels, walk, walking. Bookmark the permalink.

32 Responses to The Early Bird Catches the Worm.