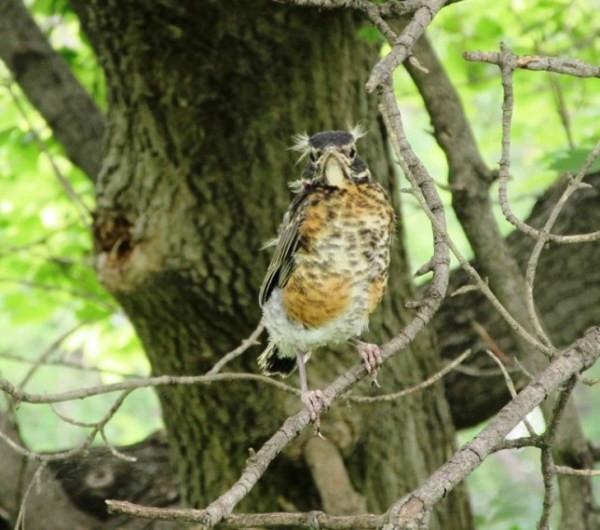 It is time to bid the robin babies at Council Point Park a fond adieu.

This last month I’ve had a flurry of blog posts about babies – robins, goslings and even ducklings.  The last group of robin chicks I’ve been monitoring has fledged, so all that is left now is an empty nest.  My little feathered friends are nowhere to be found as they are now out and about in the Park.

I want to share some of the photos from the last few days.

Wednesday morning when I passed underneath their tree, I looked up to find two robin chicks sitting outside the nest.  They looked a little woeful as they gazed toward the Creek, no doubt looking for Mama Robin to return with their breakfast.   I wondered where the third chick was.

On the next time around the walking loop, once again I looked up and found the same pair of chicks, but this time they were gazing upward at that third chick that had flown, or hopped, from the nest onto a nearby branch.  I grabbed the camera again because this little guy was wobbling back and forth, so I figured it was his “first fledge” and he was a little unsteady and unsure of himself.

Meanwhile, the remaining chicks near the nest had shifted their gaze upward to their brother (or sister) with a look of awe.

He peeped a few times and Mama Robin flew over to watch him and peeped back at him.  I don’t understand “bird speak”  but suddenly he hopped down to her branch and seemed more stable at this point.

With the camera in hand, I decided to linger to see if the pair of chicks would be inspired to take the big step, but they stayed put, perhaps afraid to venture out of that safe haven, or maybe sensing rebuke by Mama Robin for doing so.

On the third and final loop on the walking path, I noticed only one chick remained by the nest, waiting on breakfast or flying lessons, whichever came first. 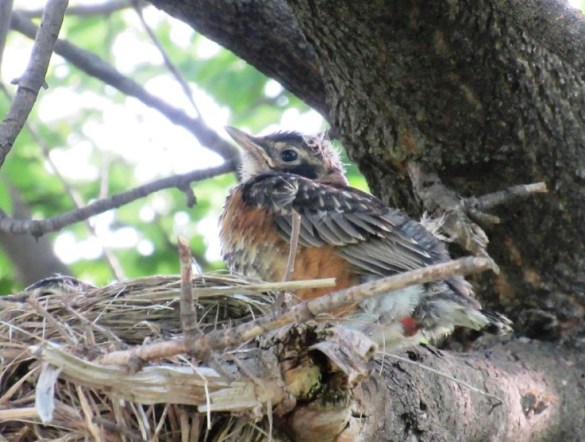 The following morning, that familiar ritual of glancing up into the tree to scope out the doin’s in the nest was decidedly different.  After four weeks of monitoring Mama Robin, first sitting on the nest incubating the eggs, then keeping her hatchlings warm (it was still quite chilly the beginning of May), followed by watching those scrawny hatchlings evolve into cute chicks, and now fledglings, this time my glimpse of the nest netted a big zero, because the nest was totally empty. 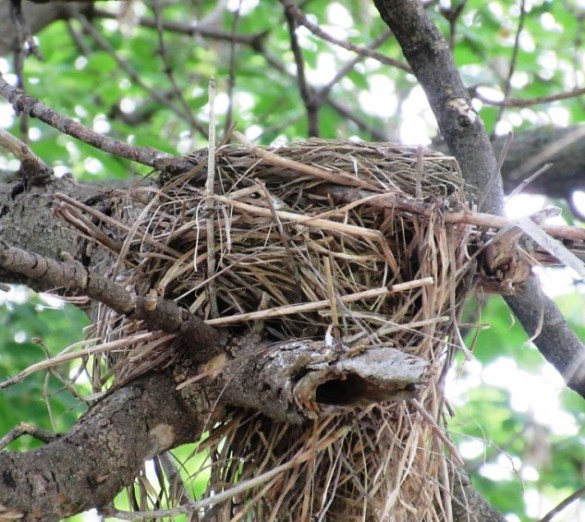 But, I was rewarded with a peek at the trio of fledglings, all present and accounted for and perched on various branches.  Just like their one brave sibling the day before, they all were still a little unsteady on their feet, perhaps owing to their lack of tail for balance, shortened wings, plus the fact that Mama Robin obviously never suggested to her brood that they pick a twiggy perch that could support their weight so they did not have to sit sideways while the branch sagged a little beneath them. 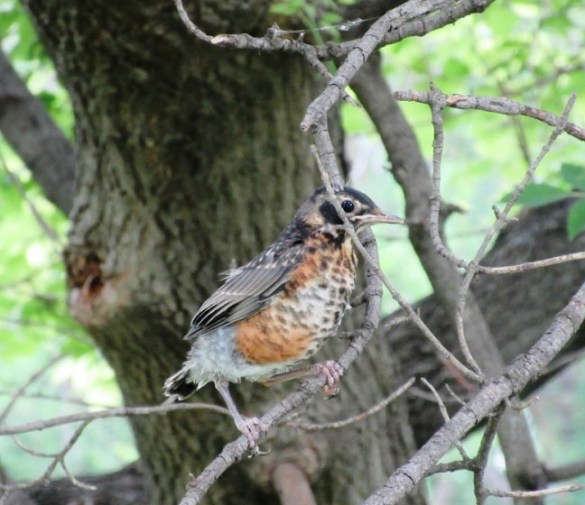 My favorite photo of these two days is the one I chose as the header image for this post.  To me, the fledgling was wearing a look of “woe is me” as he balanced precariously on a lightweight branch.  I want to put a thought bubble over his head that says “now I am out in the world, what the heck do I do next?”  I love those disheveled downy feathers on his head and that disgruntled look rivals the image of either the “Mad Bluebird” or “Grumpy Cat”.

Mama Robin was spearheading this fledging campaign but even though her brood is now “fully fledged” she was still mothering them.

I watched as she brought food, and, just as she arrived and alighted onto the branch where her youngster was perched, he opened wide for that morsel of food that Mama had brought for him.

You can kick ‘em out of the nest, but they still come home for some of Mama’s food … in this case, she does not do laundry too.  (Smile) 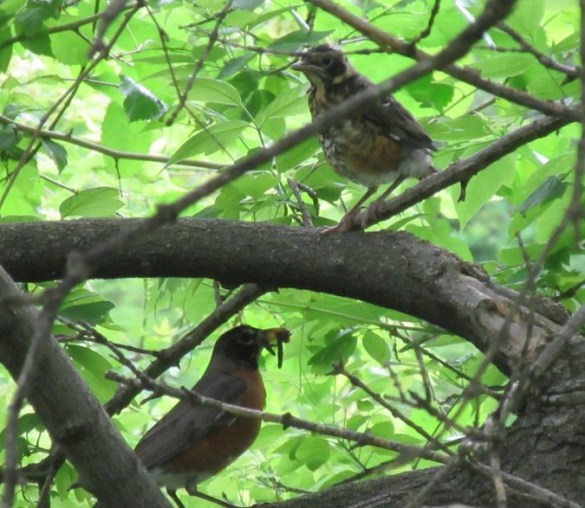 I have enjoyed watching nature up close with this Spring’s baby boom.  With the robins fledged and departed from that tree, all that remains for me now is watching the goslings as they progress toward adulthood.   I wanted to see the swans with their cygnets riding on their back, and, Mike, one of the walkers who often visits the riverfront at Dingell Park, said he has not seen any, and he even asked the fishermen to keep their eyes peeled for them.  My visits to that venue were few and far between due to our many rainy weekends throughout May.  I guess I will have to wait for next Spring now.

Several people at the Park have asked if I’ve seen any baby squirrels and I’ve told them “no” but that question prompted me to research a little about my furry friends and their young.  I’ve Googled for images of baby fox squirrels to get an idea of characteristics, coloring and the size of the babies, which are known as “kits” or “kittens”.  I learned that mating season is December to February and also from May until June and that the babies are born blind and dependent on their mothers for the first two or three months of their life.  When proper introductions to squirrel kin and their young’uns are made, I’ll be sure to include them in this blog.

This is my first blog and I enjoy writing each and every post immensely. I started a walking regimen in 2011 and decided to create a blog as a means of memorializing the people, places and things I see on my daily walks. I have always enjoyed people watching, and so my blog is peppered with folks I meet, or reflections of characters I have known through the years. Often something piques my interest, or evokes a pleasant memory from my memory bank, so this becomes a “slice o’ life” blog post that day. I respect and appreciate nature and my interaction with Mother Nature’s gifts is also a common theme. Sometimes the most-ordinary items become fodder for points to ponder over and touch upon. My career has been in the legal field and I have been a legal secretary for four decades, primarily working in downtown Detroit, and now working from my home. I graduated from Wayne State University with a degree in print journalism in 1978, though I’ve never worked in that field. I like to think this blog is the writer in me finally emerging!! Walking and writing have met and shaken hands and the creative juices are flowing once again in Walkin’, Writin’, Wit & Whimsy – hope you think so too. - Linda Schaub
View all posts by Linda Schaub →
This entry was posted in Uncategorized and tagged birds, humor, nature, Park, robins, Spring, walk, walking. Bookmark the permalink.