Here’s a riddle for you … 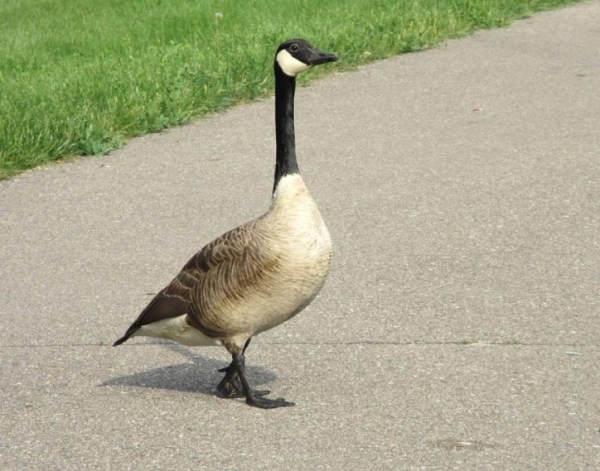 Why did the chicken goose cross the road perimeter path?

To get to the other side, of course, but, also to torment the walkers who must obediently wait while each goose, including goslings, takes its good ol’ sweet time goose stepping across the pathway.  You daren’t try to rush forward when you see them coming, or you will be subjected to histrionics such as hissing, or wing flapping, not to mention being chased by said waterfowl.  The moral of the story is:  you’re a silly goose if you dare to cross this bunch!

Indeed, we walkers are a sad lot, because we must adhere to the rules that the geese at Council Point Park impose on us.  But, we are quick learners because we don’t want to be goosed by a goose – just try and cross their path, especially when the goslings are in tow, and you might turn around to find the gander of the goose brigade, head down, and in attack mode, ready to bite you in the butt!

I do enjoy watching the geese parading around the Park, but, Canada geese are often ornery and sometimes get way too big for their britches.  In a nearby city, the authorities have taken matters into their own hands and resorted to hiring “goose busters” to chase the geese away from parks and golf courses, and especially the beaches, where excessive goose droppings cause E. coli issues for the lakes.  The goose busters are border collies, a breed of dog that excels in herding animals and they have been taught to keep the geese at bay.  The dogs don’t hurt the geese, but instead bark and chase them down, thus discouraging the waterfowl to graze and make messes.  Here is the story, along with pictures of the goose busters if you would like to read more about them:  http://www.thenewsherald.com/news/metropark-unleashes-dogs-to-control-canada-geese-population-in-harrison/article_c117a79c-91ab-5a75-9934-c363c2a5fcb5.html

The downside is, if you chase the geese away, they have to go somewhere else to graze – so, what’s a goose to do?  What better place could he pick than the beautifully manicured field at Comerica Park where the Tigers and Angels were playing baseball last night?  The game was in a rain delay when a Canada goose came in for a landing on that very field.  A groundskeeper took off after it, but the poor goose was scared and ran all over, including running the bases, occasionally attempting to fly, but barely lifting off the ground.  When it finally got into flight mode, up it went, but still terrified from its ordeal, the goose flew head first into the cement video scoreboard and then dropped down one level into a horrified crowd.  Fortunately, a local veterinarian who was attending the game, quickly scooped up that traumatized feather baby, tucked him under her arm, whisked him out of the stadium, then released him into the bushes outside the ballpark.  The game resumed, the Tigers won and soon #RallyGoose was trending on Twitter.  The goose even had its own Twitter handle:  Tigers Rally Goose.  When the game was over, the veterinarian checked on the goose, which had not moved from the bushes, so the vet took him home with her where he spent the night in the basement in a dog kennel.  This morning the goose was checked out at Michigan State University Veterinary Medical Center, where x-rays revealed no broken bones or major injuries and it will be released to a wetland sanctuary in the Lansing, Michigan area in a few days. The veterinarian who helped to save the goose, threw out the first pitch before today’s baseball game.  So the story ended on a happy note; hopefully Tigers Rally Goose can connect up with his family.  If you want to read more or see the video of the goose on the loose, just click here:  https://www.freep.com/story/sports/mlb/tigers/2018/05/31/detroit-tigers-goose-comerica-park/658793002/

Council Point Park deals with the swelling Canada Geese population by spraying a grape concentrate mixture on the grassy fields around the Park. once the goslings are old enough to fly, which is approximately ten weeks after they hatch.  The mixture does not harm the geese, but they don’t like the taste, so they will go elsewhere to graze.  Soon the Canada geese will molt and lose their flying feathers, so wherever they go during that time period is a mystery, but they will return again in late Summer/early Fall.

In the meantime, we walkers will just grin and bear it as to the geese and their belligerent ways.  We grit our teeth as we step around the poop-strewn pathway and we have to walk through the dew-laden grass and get our feet wet since the geese decide to cross the pathway that is there for the humans.

Today, once again, it felt tropical outside, the result of rain last night and in the early morn.  It was already 75 degrees F (23 C) and 80% humidity when I left the house – it was 80 degrees when I returned home.   Thank goodness for the breeze because it made it more bearable.

As I walked through the neighborhoods, I noticed large puddles and sopping wet grass.  At the Park, the pathway was dry, but the grass, in need of cutting, was very wet.  I had just started on the trail and glanced ahead as the geese appeared.  They had finished traipsing through the soccer field, and were headed to the pathway and poking along, taking their sweet time.

… as well as the human footprints of a brave soul who decided to forego wet feet, yet obediently stayed on the very edge of the perimeter path, still yielding to the geese. 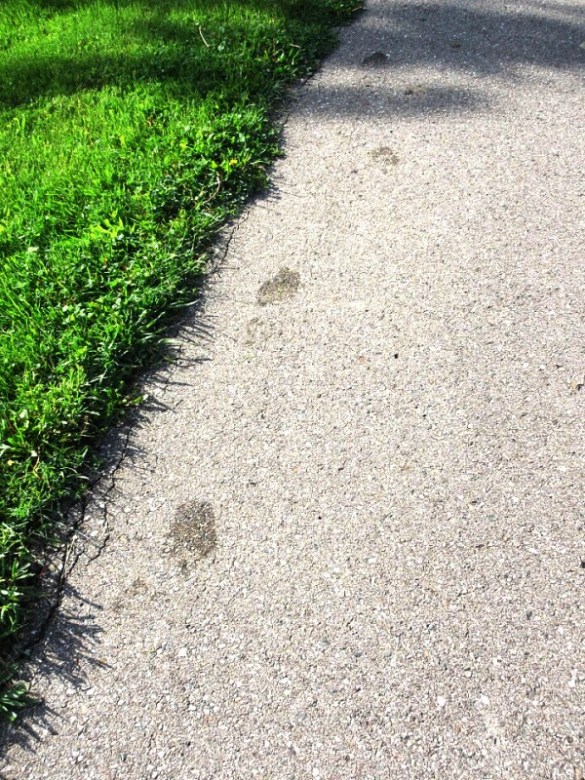 What I really wanted to do was get a photo of four geese, around the same size, following one another while crossing the path, similar to the Beatles walking across Abbey Road, the cover shot on their album by the same name.  But that was not to be.

There are three families of Canada geese currently at Council Point Park.  The smallest ones are still at that cute-and-fuzzy stage.

Still another pair of geese has goslings that are still small enough to be cute, though just entering that gangly awkward stage.

The oldest goslings at the Park now have their more permanent plumage, and …

… as a result, some are downright homely. 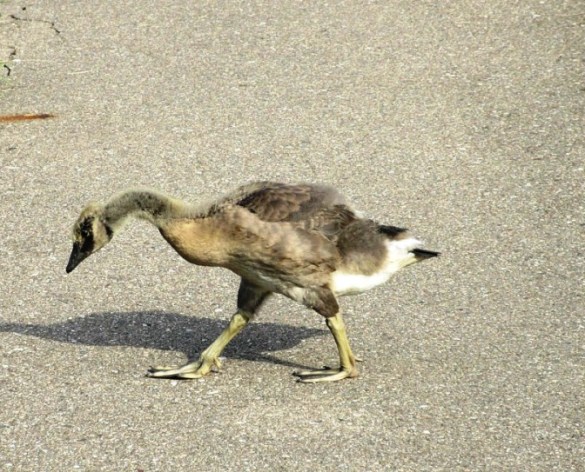 Okay, I said it … but, we all have those pictures in the family album where we are all arms and legs, wearing big-framed glasses or braces on our teeth, or, fresh off a “bang trim” by Mom or Dad who were scissor-happy.  But those goslings, just like you and me, are just as precious to their parents, as you were your parents’ pride and joy back in the day, no matter your appearance.

Here’s one of me for Throwback Thursday – not sure about that style with the hoop dress fad and however did I sit in the car?  And I think the bobby pins created a hairdo that was not a good look at all, especially for an eight-year-old girl! 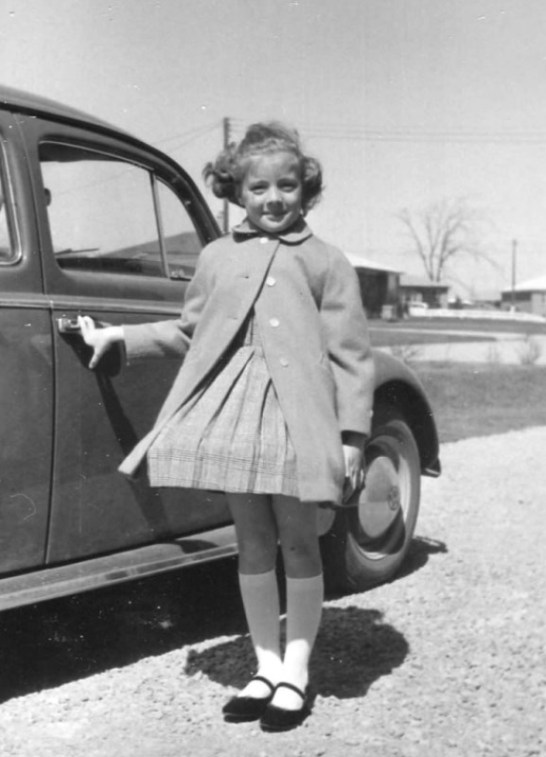 Since it is the last day of the month, here are my walking mileage stats:  354 miles walked so far in 2018.  I had hoped to have walked at least 400 miles by now, but our May was one for the record books as to rainfall.  I was willing, but Mother Nature did not cooperate.  So, to reach my goal of 1,051 (one mile more than I walked in 2017), I have 697 more miles to go and seven months to accomplish this feat with my feet.

This is my first blog and I enjoy writing each and every post immensely. I started a walking regimen in 2011 and decided to create a blog as a means of memorializing the people, places and things I see on my daily walks. I have always enjoyed people watching, and so my blog is peppered with folks I meet, or reflections of characters I have known through the years. Often something piques my interest, or evokes a pleasant memory from my memory bank, so this becomes a “slice o’ life” blog post that day. I respect and appreciate nature and my interaction with Mother Nature’s gifts is also a common theme. Sometimes the most-ordinary items become fodder for points to ponder over and touch upon. My career has been in the legal field and I have been a legal secretary for four decades, primarily working in downtown Detroit, and now working from my home. I graduated from Wayne State University with a degree in print journalism in 1978, though I’ve never worked in that field. I like to think this blog is the writer in me finally emerging!! Walking and writing have met and shaken hands and the creative juices are flowing once again in Walkin’, Writin’, Wit & Whimsy – hope you think so too. - Linda Schaub
View all posts by Linda Schaub →
This entry was posted in Uncategorized and tagged geese, Goslings, humor, nature, Park, Spring, walk, walking. Bookmark the permalink.

32 Responses to Here’s a riddle for you …