Look who I found …

… or perhaps I should say found me?

Aah, today was like a breath of fresh air after this stifling and sultry weather we’ve had for one solid week. It was a joy to walk again.  Just as predicted, last night we had a storm and torrential rain and it was that weather event that broke the heat.  Before the storm, we soared to 96 degrees and it was the seventh day in a row over 90 degrees with high humidity.  The meteorologists were chock full of weather stats and I’ll throw a few out as well:  in 2018, we’ve had thirteen days at 90 degrees or better, and usually we average only about eleven days the entire year.  Luckily, we’ll get a two-day reprieve with cool weather, than back to the 90s again on Monday.  Ugh!

Earlier this week, I found an old friend.  I’m always glancing around as I walk through the neighborhood, and not just to ensure I don’t trip over an uneven sidewalk or miss a car pulling out of a driveway, with the driver not mindful that I am happening along.

You might recall in the tail end of May I discovered the family of robins nesting in a homeowner’s gutter on Pagel Avenue.  The chicks were about ready to fledge.  They were so big, and the nest was so crowded, that when I walked by, they were standing on the edge of the nest waiting for Mama Robin to take them on flying lessons so they could get certified to leave their twiggy home.

The very next day when I walked past, the nest was empty and one of the chicks was sitting on the fence.  I am sure it was his first time flying solo, and I was his first human encounter.  He sat there for the longest time, a little wobbly and clinging to the chain-link fence.  I wrote about that sweet little guy with the feathery tuft on his head in this post I entitled “Empty Nesters”:  https://lindaschaubblog.net/2018/05/24/empty-nesters/

Every time I walk down Pagel Avenue, I look for my little pal, although I can’t say for sure I’d be able to pick him out in a crowd.

The other day, as I strolled down the last leg of Pagel Avenue, just before reaching River Drive where Council Point Park is located, I looked around, just as I always do, and saw a robin alighting on that same homeowner’s roof.  It landed with its back toward me and sat there.  I stopped and pulled the camera out of the case.

A few seconds later that robin redbreast stole a backwards glance at me and I took its picture.

Then, did I just imagine there was a glimmer of recognition that I was the one who spoke softly to that baby bird as he timidly perched on the fence the first day he fledged?

He turned his body around and faced me, perhaps for a closer inspection? 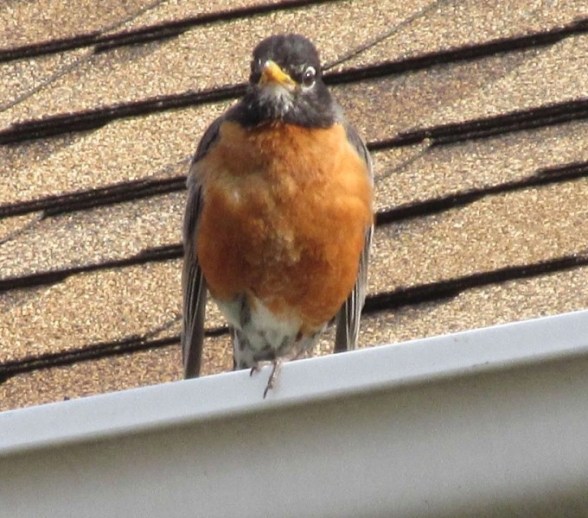 Well, I inspected him too.  The spotted breast feathers are gone and his orangey-red chest and dark plumage stood out on that pale-colored rooftop.  I called up to him, and, while we were not going to have a conversation of course, next I saw him open his beak and a few notes came out.  And was that a smile?  Look at the picture up at the top of this post, then you tell me.

This robin obliged me and posed for these pictures, warbled a few notes, then flew away to find worms, grubs and other goodies that robins are fond of and I continued on my trek to the Park.

This is my first blog and I enjoy writing each and every post immensely. I started a walking regimen in 2011 and decided to create a blog as a means of memorializing the people, places and things I see on my daily walks. I have always enjoyed people watching, and so my blog is peppered with folks I meet, or reflections of characters I have known through the years. Often something piques my interest, or evokes a pleasant memory from my memory bank, so this becomes a “slice o’ life” blog post that day. I respect and appreciate nature and my interaction with Mother Nature’s gifts is also a common theme. Sometimes the most-ordinary items become fodder for points to ponder over and touch upon. My career has been in the legal field and I have been a legal secretary for four decades, primarily working in downtown Detroit, and now working from my home. I graduated from Wayne State University with a degree in print journalism in 1978, though I’ve never worked in that field. I like to think this blog is the writer in me finally emerging!! Walking and writing have met and shaken hands and the creative juices are flowing once again in Walkin’, Writin’, Wit & Whimsy – hope you think so too. - Linda Schaub
View all posts by Linda Schaub →
This entry was posted in Uncategorized and tagged nature, Robin, Summer, walk, walking. Bookmark the permalink.

44 Responses to Look who I found …