This morning I meandered around Lake Erie Metropark and its marshland area.  You might recall my post four weeks ago today, when I described the three-mile long rocky shoreline, lotuses and marshland areas … and my sunburn.  If that doesn’t jog your memory, perhaps you remember the wacky-looking heron with the cowlick, whose mouth was wide open like it was singing?

Lake Erie Metropark was not originally on today’s agenda.  Earlier in the week, when the weather folks predicted a sunny Saturday, I intended to head to Hines Park, a venue where the park is closed to traffic every Saturday from 9:00 a.m. to 3:30 p.m., which allows walkers and bicyclists to enjoy this massive park unencumbered by vehicles.  But, Hines Park is prone to flooding and our torrential rains earlier this week closed the park for several days, so I tabled that idea.  Elizabeth Park was my second option, but they have their annual Jazz on the River fest all weekend, and I figured the set-up for this event might take away from the ambiance of the park, so I crossed it off my list.

Having recently invested in a Huron-Clinton Metroparks pass, I decided I might as well make some use of it, so off I went, on day two of a four-day heat wave.  It was already 71 degrees and 81% humidity when I left the house – whew!  This park is a half-hour drive for me and when I arrived, there was still a touch of fog on the horizon.  It was not as picture-perfect as last time, that’s for sure.  The water was completely calm with a mere 5 mph breeze, so it was already hot and sticky by the water’s edge.

For this outing, I began my trek at the south end of the Park, and walked the entire shoreline back to the bridge that crosses into the marshland area, and then back.  I scanned the water for any freighters, hoping to catch sight of one, but, at that time, there was just one lowly sailboat struggling to go anywhere on this windless morn.

The rocky shoreline was so scenic, despite the haze that permeated the park. 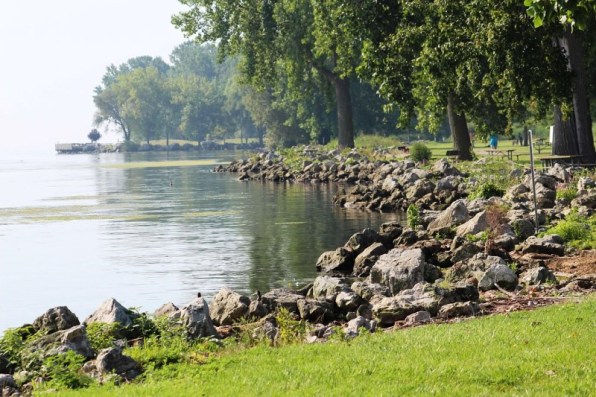 I wanted to check out the water lotuses because Lake Erie Metropark is renowned for these tropical flowers that are considered rare for this state.  They are the largest and most accessible lotus beds in Michigan.  On my last trip here, I incorrectly referred to these pond flowers as “water lilies” and have since discovered they are “American lotuses” – I thought the terms were interchangeable, but the leaves of a water lily float on the water’s surface, as does the lily.  The lotus flower rises above the leaves.  These lotuses were in abundance, hundreds of them, and they were thriving in the moist tropical-like air, and, they looked a lot better than Yours Truly who was already wilted just two miles into her journey.

To get up close to the lotuses, I trekked along the shoreline, right up by the rocks.  My feet were sopping wet from the dewy grass and I tried to get into some shady areas to avoid coming home looking like a lobster.

I took several pictures of the group of lotuses from afar so you can see how the lotus bed occupies a large portion of the park’s Lake Erie shoreline.

By the time I was up close to these tropical beauties, I marveled how they had grown since I was here on July 7th.  The lotus leaves were large the last time, but today they were humungous. 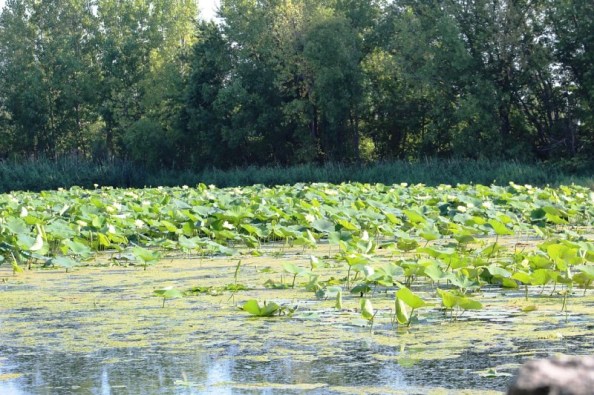 Last time there were only buds and no blooms open.  This is because the American Lotus blooms from mid-July to late August.  Today many of the lotus blooms were open and reaching up toward the sky.

The rocky shoreline ends abruptly, so you then must follow a paved path.  Bulrushes and other types of reeds, on either side of that path, are so dense, you cannot see through them.  Soon, you find yourself at the wooden bridge that crosses over a marsh.

On one side of the bridge is another view of the lotuses and Sturgeon Bar Island.

I think those swallows had better luck catching bugs than I had capturing their images as they did their diving dance before me.

You can see all the algae in the marsh and these ducks were paddling through the muck and mire and thick seaweed – they almost blend right in, don’t they?

There are a couple of wooden benches on this bridge; they looked inviting, but I knew if I sat down, I would not want to get up again, so I turned around to head back to my starting point at the other end of the park.  Although it was only about 10:00 a.m., the sun was beating down mercilessly and those powerful rays bouncing off the water made it seem hotter.  As a result of the heat and humidity, soon my trek began to turn into a trudge, and I stopped every so often to enjoy the shade of a large tree along the way.

The ducks were cool as a cucumber, as a group of them paddled along the water’s edge, oblivious to the heat, and occasionally stopping to dive head first into the water, or nibble on the reeds that grow along the shore.  The others were keen on preening or having a little nap.

I liked this duck with his special perch, set apart from the others.

I finally made it to the car and flopped down onto the seat, dribbles of sweat running down my face and the back of my neck – ugh!  I switched the A/C to 60 degrees to cool off and glanced at myself in the rear view mirror, where I saw wet and wispy tendrils clinging to my face which was reddish from the heat.  I glanced at the pedometer – well almost six miles, in this stinkin’ heat – so no wonder I felt like a limp rag.  Gradually, I cooled off and started the car, because it was time for one more place … Pointe Mouillee State Game Area.

I knew this was a stone’s throw away from Lake Erie Metropark, so I headed down a narrow dirt and gravel-covered road, so narrow that only one car could cross at a time on the many bridges you traverse to arrive there.  It seemed as if I drove forever, until I finally got to my destination, where it was deserted and really didn’t hold much appeal, this time of year anyway.  But, I wanted to check Pointe Mouillee out as it is a primo spot for migratory waterfowl come Fall.  They have a two-day “Waterfowl Festival” every September, so perhaps it will be a hoppin’ place then, but today it was quite desolate.  I saw no birds except a few seagulls that had settled onto the surface of the water and a hungry sparrow that pecked at a wrapper – it was hopeful there was something inside that “Hershey’s Gold” package, but it was empty, so it flew off.

As I stood gazing at the Fermi 2 Nuclear Plant huffing and puffing away in the distance, a pleasure boat suddenly whizzed by.  I wondered where it came from – out of nowhere it seemed.

Well, I was alone again, and walked over to the murky-looking water, with its seaweed and algae and hundreds more lotuses … a few in bloom, but not as large and beautiful as the specimens at Lake Erie Metropark.  You can see just how large the leaves are in this photo.

Finally, hungry and thirsty, I was ready to head home, six miles on the pedometer and a blog post bubbling around in my brain.

This is my first blog and I enjoy writing each and every post immensely. I started a walking regimen in 2011 and decided to create a blog as a means of memorializing the people, places and things I see on my daily walks. I have always enjoyed people watching, and so my blog is peppered with folks I meet, or reflections of characters I have known through the years. Often something piques my interest, or evokes a pleasant memory from my memory bank, so this becomes a “slice o’ life” blog post that day. I respect and appreciate nature and my interaction with Mother Nature’s gifts is also a common theme. Sometimes the most-ordinary items become fodder for points to ponder over and touch upon. My career has been in the legal field and I have been a legal secretary for four decades, primarily working in downtown Detroit, and now working from my home. I graduated from Wayne State University with a degree in print journalism in 1978, though I’ve never worked in that field. I like to think this blog is the writer in me finally emerging!! Walking and writing have met and shaken hands and the creative juices are flowing once again in Walkin’, Writin’, Wit & Whimsy – hope you think so too. - Linda Schaub
View all posts by Linda Schaub →
This entry was posted in Uncategorized and tagged Lake Erie, Lake Erie Metropark, nature, Summer, walk, walking, Water Lotus. Bookmark the permalink.