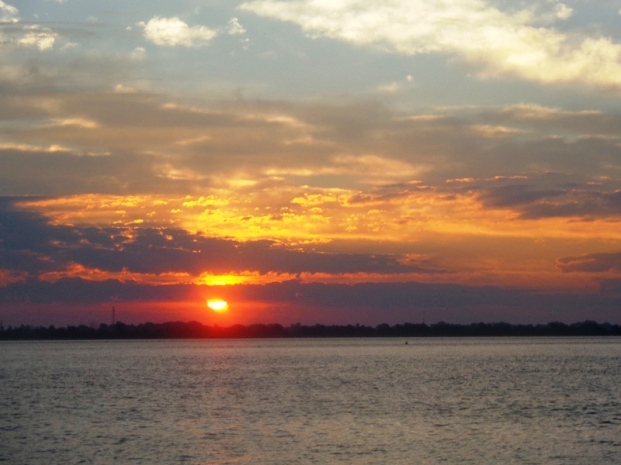 It was another sweltering morning, with heat and humidity to the hilt and temps which would soar to 90 degrees by late afternoon.  I did my walk early, but still felt my shirt sticking to me as I trudged home, tiny rivulets of sweat rolling down my face.  But, with over 400 more miles to meet my walking goal for 2018, I slogged on.

On this morning’s newscast, they recalled the 15th anniversary of the big blackout on August 14, 2003.  The power grid went down, leaving 50 million customers in the U.S., from Ohio to the East Coast, and even in southern Canada, without electricity for a day or two.

I was still working on site in 2003.  My boss was on the first day of his annual week-long vacation in the Upper Peninsula.   In those days, the cellphone signal was not as strong, so he called me before crossing the Mackinac Bridge to inquire about any messages, because once over the Big Mac Bridge, he would need a landline to return those calls.  There were no messages so we hung up.

Mere moments later, I was processing mail at the postage meter and the machine made a whining noise and just died.  So did the lights in our suite.  While I am prepared for loss of power at home, with a cupboard filled with lanterns, a battery-operated radio, fan and blanket, plus extra batteries, I had none of those essentials in my desk at work.  (Hmmm – all that Brownie, Girl Scout and Pioneer Girls training was for naught.)  Plus, it was pitch dark in our office suite, because my boss has collected labor-related artwork and cartoons for decades; there is barely an empty space on his office walls that does not contain framed art, so he has always kept the blinds down to protect those items from sun damage.  My own office had no window.

Even though it is a small suite, and you might walk the same path every day, thus you should know your way in the dark, that is easier said than done.  I found some regular stamps for the mail, grabbed my tote bag from under my desk and left.  Happily, I was able to get out of the suite as I didn’t have to wait for the door mechanism to recognize my image to allow me to depart.  Sometimes in the past that was problematic as I am tall – the electronic eye sometimes trapped me in there and I’d walk back and forth a half-dozen times until I was able to open the door.  I wanted out, as in “to escape” … after all, who knew what was really going on?  Of course, my mind was racing as I jumped to conclusions – after all, 9/11 was only two years before, so an overtaxed electrical grid on a steamy hot August afternoon was the furthest thing from my mind.

Our building, Stroh River Place, has six floors and we regularly practiced emergency preparedness drills, and I was the contact person for our office, so I knew the evacuation plan and where to assemble in the street in the event of an emergency.  Our suite, located on the 5th floor, meant five flights of stairs to go down – were they double sets of stairs for each floor?  I don’t even remember now, and I’ve not been in the office since April of ’09.  But, yes, there was panic, as all the tenants grabbed their belongings and bolted, sweaty hands clinging to the stairwell railings as we collectively made our slow descent to ground level.  There was pandemonium in the street as we milled about, wondering what happened.

Smartphones sure weren’t commonplace in 2003, but thanks to the quick-thinking owner of Andrews on the Corner, a restaurant across from the building, we discovered what happened.  He got the scoop from running to his car and turning on the radio.  Low tech works well sometimes!  He grabbed a megaphone to tell the masses assembled in the street that a massive power outage had wiped out the electricity in some parts of the States and the extent of the damage was still not known.  We lost power at home too but luckily it returned late overnight.  At work we had no power restored for two days, and during this time, anyone with a pass to enter the Stroh River Place campus could access another tenant’s suite, since the power outage did not allow securing of same.  I had scheduled Friday as a vacation day anyway and since we had power at home, life went on as normal, but I’ll always remember August 14th as an angst-filled afternoon.

August 14th is memorable for me for a few more reasons.  For years, I always took a vacation day on August 14th, or a day close to it.  This calendar date was a day designated to celebrate a  “second birthday” for my mom and I.   This was because Mom’s birthday was on February 14th and, because it was not always easy to get into a restaurant on Valentine’s Day, or, often it was cold and snowy, so we just fast forwarded our birthday celebration exactly six months.  Sometimes we celebrated my April 14th birthday then as well, because snow occasionally impacted my birthday lunch or dinner.  So, whatever works for you … August 14th became a good excuse to enjoy a vacation day and break up the Summer with something pleasant like shopping, a movie and a nice dinner.  Since my mom’s death in 2010, August 14th does not pass me by without a pang of remembrance of the significance of the day, a bittersweet annual reminder of our tradition.

Sadly, a year ago today I would add another memory to this calendar date.  My good friend and neighbor, Marge Aubin, passed away suddenly on August 14th.  She had been ill with advanced COPD for some time, but was scheduled to return home after a week-long stay in the hospital for breathing treatments.  I am including this link to the tribute post I wrote that day, since only a handful of people followed my blog back then.  https://lindaschaubblog.net/2017/08/14/last-sunrise/

My posts were often peppered with Marge’s name, as they should have, because, if not for her, I would not be writing this post today.  Marge encouraged me to start a blog to memorialize my daily walks after I’d e-mail or message her about things I saw while I was out walking.  She kept saying “blog about it!”  So, in February 2013, at her insistence, I started this blog.  Since August of 2013 I have been blogging at Patch.com and also still appear on Heritage Newspapers’ blog rolI.  I have Marge to thank for encouraging me to put my blog on those two places.  Her friendship to my mom and me encompassed many years.

Last August 14th I awoke and was thinking about the significance and poignancy of the day, but niggling in the back of my mind was the fact I’d never heard from Marge the day before when she was supposed to come home from the hospital.   I sent her several Facebook messages and got no response.  This was unusual as we’d often chatter on social media throughout the day.  She had been looking forward to sitting out on her deck and enjoying fresh air after being cooped up for a week due to her latest COPD flare-up, so I thought she was simply unplugged and enjoying the fresh air.  In the evening, I sent her my latest blog post, just as I usually did, so she could easily access it on her phone.  It was a post comparing my great grandmother’s lacy doilies to the Queen Anne’s lace I saw at the Park on my daily walks.  Marge loved posts about my family members from the past, so I knew she would have enjoyed this one.  What I did not know was she was dire straits health wise on the 13th, never returned home that day and passed away shortly after 5:00 a.m. on Monday, August 14th.

For today’s post, I am using another one of Marge’s Bishop Park sunrise photos she sent to me.   When she was feeling well, she went to this venue and watched the sun rise every morning.  This above photo was taken at Bishop Park on September 29, 2013 at 7:45 a.m.

I recently learned that no two sunsets are the same because clouds are like snowflakes … no two are alike.  I assume this is true for sunrises as well.  Beauty from nature surrounds us and we are wise to drink it all in for as long as we are able to do so.

Sunrises were Marge’s zen.  Everyone must have a zen … something that gets them through the day and through this thing we call life.  My zen is walking and immersing myself in nature – what is yours?

This is my first blog and I enjoy writing each and every post immensely. I started a walking regimen in 2011 and decided to create a blog as a means of memorializing the people, places and things I see on my daily walks. I have always enjoyed people watching, and so my blog is peppered with folks I meet, or reflections of characters I have known through the years. Often something piques my interest, or evokes a pleasant memory from my memory bank, so this becomes a “slice o’ life” blog post that day. I respect and appreciate nature and my interaction with Mother Nature’s gifts is also a common theme. Sometimes the most-ordinary items become fodder for points to ponder over and touch upon. My career has been in the legal field and I have been a legal secretary for four decades, primarily working in downtown Detroit, and now working from my home. I graduated from Wayne State University with a degree in print journalism in 1978, though I’ve never worked in that field. I like to think this blog is the writer in me finally emerging!! Walking and writing have met and shaken hands and the creative juices are flowing once again in Walkin’, Writin’, Wit & Whimsy – hope you think so too. - Linda Schaub
View all posts by Linda Schaub →
This entry was posted in Uncategorized and tagged Beauty, nature, Sunrise, walk, walking, zen. Bookmark the permalink.