Jack Frost nipping at your rose … 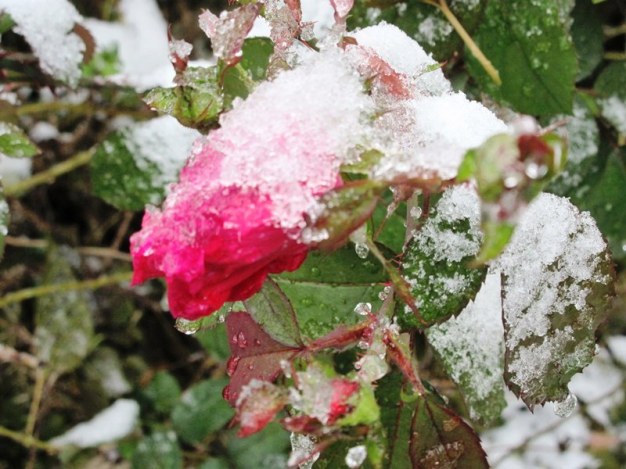 We had a few nice days in early October and after that – well, pfft!  And, we had a smattering of snow last Friday, and even more yesterday morning.  It was mostly on the lawn, and when I went around the backyard, I had my camera with me because the snow’s appearance, though a nuisance, was very beautiful.

I’ve not been much of a gardener this year.  The weather wreaked havoc with my own plans over and over again, so, when I had the opportunity to venture out on a weekend walk, I told myself I was not going to cast that chance aside to pull weeds, or nip spent rose blooms.

I’ve always put the yard “to bed” by late October, first week of November latest.  I know at that time, there will be lots more raking to do, since we have these huge trees in the ‘hood, so both the back and front yards will be covered multiple times with a carpet of leaves.  But, long before the last leaf is scooped up and put into the yard waste bags, those few remaining perennials that survived the back-to-back Polar Vortexes AND the rosebushes have all been pruned.

I intended to do this task last Sunday, but the blustery winds and cold temps caused me to simply blow it off.

I’ve never seen snow on my unpruned rosebushes before, and the sight, while beautiful, left me feeling remorseful about those frozen red blooms and buds.  Their fragile beauty was highlighted by the wet and heavy snow as you see in these pictures. 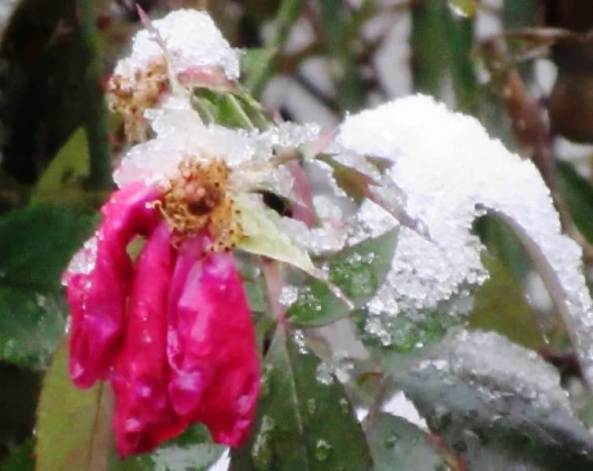 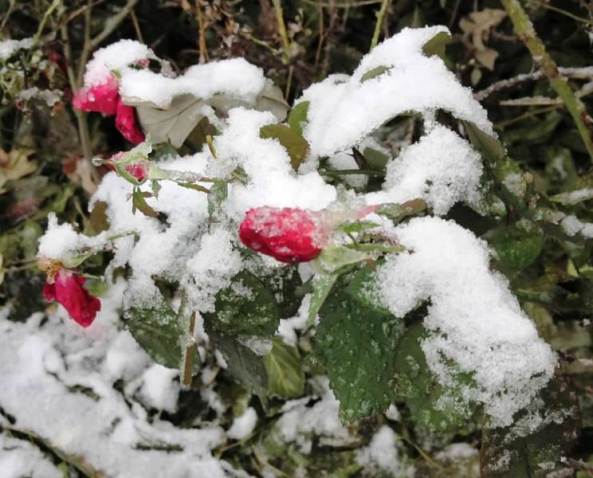 A fresh coat of snow was deposited on the lawn and leaves as well. 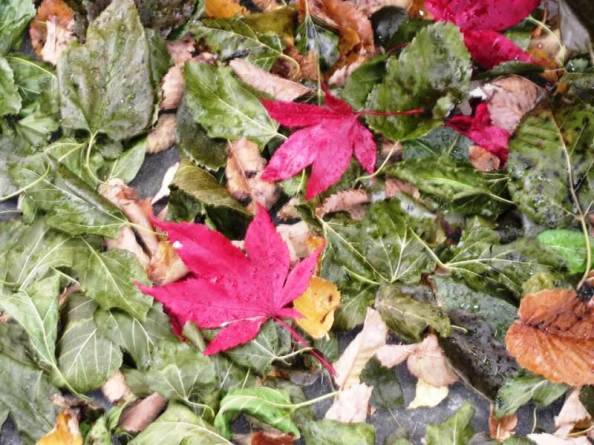 … especially this vibrant red leaf that was spotlighted in the snow.

This fleeting Fall will make me less fleet-footed as well.  Most of the snow you see in these photos melted yesterday, but traces of snow outlined homeowners’ sidewalks and gardens, plus dribbles of melted snow had frozen across many sidewalks.  I was careful walking to the Park so I wouldn’t go sliding on the ice.  It was only 20 degrees, so I dug out and donned my storm coat.  Usually the first time I wear it is in December, but we are, and have been, about 20 degrees below normal most of October and November.

It was sunny and the Park was bathed in a soft light.  The critters finished up their suet and only the dregs of the two trays remained and one squirrel was lapping it up with a pink tongue.  The other squirrels came running over for peanuts and I obliged them.  Fellow walker Mike was driving away as I arrived – he was an early bird this morning.  Only two other walkers were on the trail and they were far ahead of me.  The cold weather has most of the regular walkers taking to their treadmills or to Southland Mall for their morning trek.

So, basically I had the trail to myself.  It was very quiet and tranquil.  One portion of the Ecorse Creek had a light coating of ice which made the water looked like a cracked mirror.  Those dabbling ducks were paddling freely in wider parts of the Creek.  They were quiet as they were preening or dipping and diving for what vegetation they could scrounge up in the murky water.  Thus, the only sounds I heard were the rustling of my coat, as my forearms, swinging back and forth as I walked, brushed lightly against the nylon jacket; there was also the unmistakable crunch of peanut shells being cracked open and peanuts retrieved and enjoyed.

What a peaceful and glorious morning walk and it was over way too soon.

This is my first blog and I enjoy writing each and every post immensely. I started a walking regimen in 2011 and decided to create a blog as a means of memorializing the people, places and things I see on my daily walks. I have always enjoyed people watching, and so my blog is peppered with folks I meet, or reflections of characters I have known through the years. Often something piques my interest, or evokes a pleasant memory from my memory bank, so this becomes a “slice o’ life” blog post that day. I respect and appreciate nature and my interaction with Mother Nature’s gifts is also a common theme. Sometimes the most-ordinary items become fodder for points to ponder over and touch upon. My career has been in the legal field and I have been a legal secretary for four decades, primarily working in downtown Detroit, and now working from my home. I graduated from Wayne State University with a degree in print journalism in 1978, though I’ve never worked in that field. I like to think this blog is the writer in me finally emerging!! Walking and writing have met and shaken hands and the creative juices are flowing once again in Walkin’, Writin’, Wit & Whimsy – hope you think so too. - Linda Schaub
View all posts by Linda Schaub →
This entry was posted in Uncategorized and tagged Fall, nature, Roses, snow, walk, walking, Winter. Bookmark the permalink.

42 Responses to Jack Frost nipping at your rose …