I originally planned for this post to appear on December 25th.  I wanted to use Henry Wadsworth Longfellow’s quote about the joy of Christmas bells, which goes like this:

I heard the bells on Christmas day
Their old familiar carols play
And mild and sweet their songs repeat
Of peace on earth good will to men.

But Mother Nature interfered with my original plan, when off-and-on precipitation was scheduled from Friday through Christmas.  So, I had to implement a Plan “B” and distribute the goodies beforehand.

(The truth be told, I don’t think the critters noticed it was not yet Christmas.)

One day this past Spring I went to lovely Elizabeth Park in Trenton, and, though it was the first week in April, it was a very cold morning at only 24 degrees.  This is such a picturesque park and has something for everyone … a boardwalk along the Detroit River, a marina for boating, lots of ducks to delight in and a scenic perimeter path that encircles the Park.  There are even some odd-shaped exercise stations embedded right in the woodsy areas.

But something else caught my eye on that cold April morning … some nature lovers were giving treats to the critters.  First, a man and woman came along toting two large boules.  They quickly broke up this crusty bread and spread it over a picnic table. Immediately they had “takers” for their bread.  It was then I noticed the nearby feeding station for the birds.  There was a tree with many bird feeders and suet cakes hanging from the branches.  One bird feeder was swinging wildly since a squirrel, misappropriating the birdseed for its own use and benefit, tried to do a balancing act and scam seeds simultaneously.

As I admired this tranquil scene, I took some photos, which can be seen if you scroll to the bottom third of this post.

After I headed back to the walking path, I told myself I was going to do something special for the critters at Council Point Park this Winter and so I have done just that.  It’s been fun watching them enjoying their treats, though, as usual, I’m sure the birds were rarely lucky enough to get past the domineering squirrels and enjoy the sunflower seeds and birdseed I put out for them.

So, now I’ll recreate what I did for my feathered and furry pals at the Park.

Earlier this year, I bought a bag of safflower seeds for the cardinals at the Park.  I had hoped to lure more of these beautiful birds to the ground as I walked on the perimeter path.  Cardinals love safflower seeds but squirrels do not, so I had some method in my madness.  The only problem was, the cardinals preferred swooping down to grab a peanut on the walking path, right from under a squirrel’s nose.

A week ago today was beautiful, full of sunshine and very mild for December.  I decided to go ahead and take my goodies as rain was predicted the end of the week and some lingering precipitation into the weekend.  I wanted to monitor daily how the birds (who am I kidding here …) and the squirrels were enjoying their feast.

I chose the picnic table under the pavilion where my feathered and furry friends could see their treats, plus the goodies would remain dry under the big roof.  I divided and spread the seeds between the two trays, broke up the seed block in two so it was easier to munch on, then plunked the three seed bells into the trays of seeds.

I saw a couple of squirrels watching me the entire time – believe me, nothing gets past the squirrels, especially when it comes to food.  I pointed at the table, and even threw a couple of peanuts onto the table as an incentive for them to try what I put out. 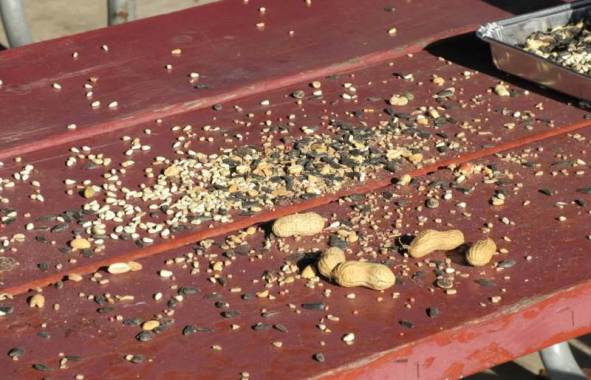 But, the squirrels can be stubborn sometimes, and instead of them leaping right over to the treats, a couple of them came nosing around my shoes as if to demand “no, feed us down here – we’ll go check it out after you’re gone!”

I saw no birds or squirrels stepping up to the table, so I left to walk.  By the time I had completed the first loop and had to pass the pavilion area, the squirrels  had discovered their treats – oh, there would be no stopping them now!

I snapped a couple of pictures of those squirrels.

The first thing I did when I arrived at Council Point Park Monday morning, was to check out the goodies I’d left the day before.  I was surprised that most of the food was intact, including the seed bells.  Mike, one of the other walkers, caught up with me on the trail and asked “did you do that – the birds were lovin’ it when I got here at 8:00?”  I told him that yes, I was Santa Claus, and said I was inspired by the set-up at Elizabeth Park and originally wanted to hang the seed bells from a tree, but decided against it.

When I arrived on Tuesday morning, the critters had really dug into the treats and clearly more than just one squirrel had discovered those goodies.  It made me smile, especially the way this squirrel, who you’ll recognize as Stubby, (the squirrel missing half his tail), insisted on sitting right in the tray of food – a little uncouth perhaps, but he was enjoying himself, and who am I to criticize his manners anyway? 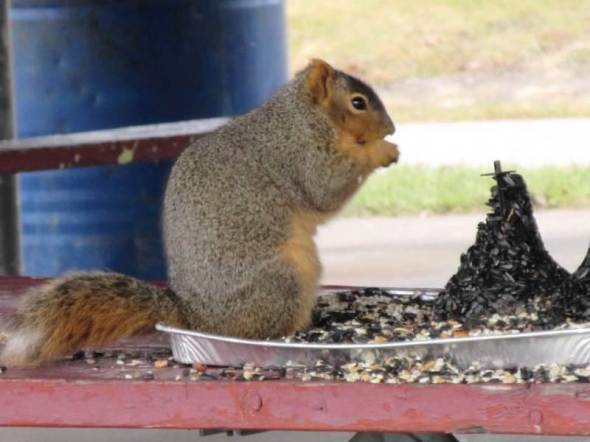 After he pretty much demolished one of the sunflower seed bells, he moved on to the seed bar.

The fourth day I sweetened the pot a little by adding some peanuts to the mix.  I knew they’d go over big with the cardinals and jays if they could get past the guardians of the gates, er … the squirrels, who were hogging the goodies.  The peanuts were mine.  I bought a can of cocktail peanuts for the holidays, and, just like my friends the squirrels, I could not keep my paws out of the peanuts, so I brought them along before I did any further damage to myself.  (After all, I still have all the Christmas cookies to get through.) 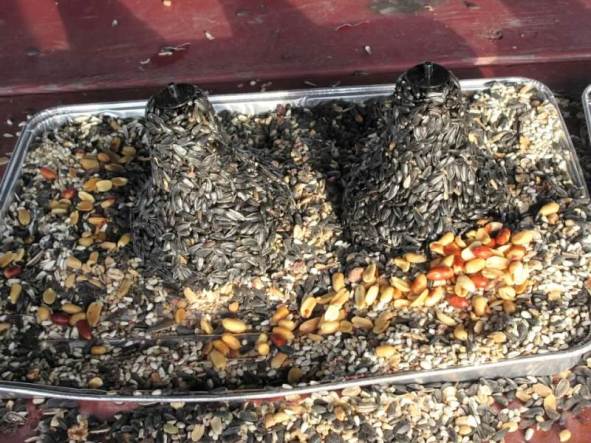 They were gone by the time I finished walking and headed for home.

Seeds were scattered all over the place  by Thursday – what a mess if it was in the backyard.  Clearly all the treats were a hit and my guess is the squirrels are gorging themselves after they beg for peanuts on the path like they are starving – we walkers are such suckers!  I approached the pavilion area, with all that food, and a squirrel came down the tree headfirst, clearly with peanuts on his mind!

Well, I didn’t make it down to the Park for Day #6 because we had a steady rain on Friday morning and I stayed tucked inside the house.

Well their treats are disappearing fast.

Gee, I wonder why?

Many of the walkers have enjoyed watching the antics as well.  Some people had estimated that the food would last well into the new year, but I’m not so sure about that – more like through Christmas Day.  Next week I’ll give you one update.  I am going to put out some more suet throughout the Winter.  But meanwhile …

The Ecorse Creek … the eatin’ is good here too!

There was more food enjoyed than just these seed treats at my favorite nature nook.  Remember when I mentioned the other day how I glean information about Council Point Park from other people who walk there at other times?  For several weeks, we’ve had seagulls swarming around overhead.  I wondered why, and even mentioned it to a few of the other walkers.  Even more interesting to me, was the fact that what seagulls weren’t buzzing and swooping overhead, were sitting on the surface of the water, much like a duck, goose or swan would sit.  I’d never seen seagulls do that before. 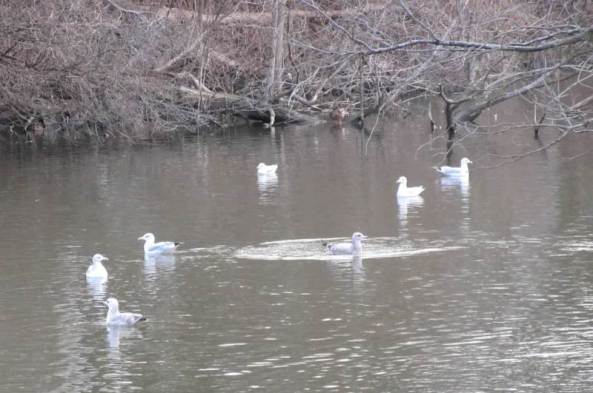 Last Sunday I was studying the movements of Harry the Heron who was fishing in the Ecorse Creek.  I stood like a statue, lest he should see me and bolt, and I had my camera poised to capture him getting a fish.  My persistence was rewarded when Harry landed one and I caught him in the act.

Considering he was across the Creek, and I was balanced precariously on a slippery slope trying to get the photo through a tangle of skinny branches and reeds, I was happy how the photo turned out.  While I stood there gazing at this heron, a trio of walkers came over to see what had piqued my interest.  They told me two other herons were at other places in the Park – three herons in one day … that had to be a record!

The next morning I positioned myself at the Creek embankment once again, as I noted that Harry the Heron was in fishing mode.  Another walker saw me standing there and I described how Harry had grabbed that fish in his beak and gulped it down in a heartbeat.  I even detailed how I saw the fish wiggling around as it went “down the hatch”.  Oh my!  I was told the herons and seagulls are in hog heaven because the shad are running.  Because inquiring minds want to know, I said “I guess a shad is a fish?”  He nodded yes, and said they were running like crazy and he saw them in groups, thick in the water, earlier in the week.  So, I learned something about shad and why the herons and seagulls were so active at the Creek – they are still hanging around as of this morning, so the shad must still be there.  Yesterday I saw a guy fishing for them off the cement landing.  I think you’d need to catch a lot of those little shad to make a fish fry, but maybe he was going to supplement his dinner with Mrs. Paul’s fish sticks, you think?

I am happy I did these treats for my feathered and furry friends.  In an ideal world, the birds and squirrels would sit side-by-side and share these treats, and the scene would resemble a Christmas card from National Wildlife Federation, so in my mind’s eye this is what really happens while I am not there to see it. 🙂

This is my first blog and I enjoy writing each and every post immensely. I started a walking regimen in 2011 and decided to create a blog as a means of memorializing the people, places and things I see on my daily walks. I have always enjoyed people watching, and so my blog is peppered with folks I meet, or reflections of characters I have known through the years. Often something piques my interest, or evokes a pleasant memory from my memory bank, so this becomes a “slice o’ life” blog post that day. I respect and appreciate nature and my interaction with Mother Nature’s gifts is also a common theme. Sometimes the most-ordinary items become fodder for points to ponder over and touch upon. My career has been in the legal field and I have been a legal secretary for four decades, primarily working in downtown Detroit, and now working from my home. I graduated from Wayne State University with a degree in print journalism in 1978, though I’ve never worked in that field. I like to think this blog is the writer in me finally emerging!! Walking and writing have met and shaken hands and the creative juices are flowing once again in Walkin’, Writin’, Wit & Whimsy – hope you think so too. - Linda Schaub
View all posts by Linda Schaub →
This entry was posted in Uncategorized and tagged birds, Christmas, Christmas treats, nature, Squirrels, walk, walking. Bookmark the permalink.