Owl be seeing you …

Well, I was bound and determined to drive all the way out to Pointe Mouillee in South Rockwood, just because I wanted to see that beautiful snowy owl.  Its images around this marshy region were captured by a local photographer, then posted on the Detroit Audubon’s Facebook site.

The car needed a run anyway, and, after yesterday’s freezing fog and black ice, today was the day I intended to look for this beautiful bird.

I went to Pointe Mouillee this past August, and, because I’ve been following the Detroit Audubon’s Facebook site over the last year, I’ve learned that not only are there migrating birds of prey and waterfowl at this locale, but also there are snowy owls, white pelicans, some songbirds that I’ve never seen around my neighborhood and even a cute little mink.  I know duck hunting season is over, so I had no worries about stray bullets.  So, I made Pointe Mouillee and Lake Erie Metropark my primary destinations on this beautiful Sunday.

I looked at a map on Friday afternoon – it looked pretty easy to find, just 5.4 miles past Lake Erie Metropark.  I saw three major streets along the way – should I jot them down?  “No, that should be easy to find, and I’ll remember it from last time” is what I told myself.  Unfortunately, a lot more info has been stuffed into my brain since August, and, after I drove past the sprawling grounds of Lake Erie Metropark, I noted the odometer reading and kept driving – 5.4  miles.  Well, I didn’t recognize anything, but it was a nice rural road, I was game for adventure, and had 3/4s of a tank of gas.  I noticed the Fermi 2 Nuclear Plant belching steam into the blue sky and thought it looked bigger than I remembered it from before – was it this close last time?  Hmmm.  Soon I could see a big church and it turned out I was about to enter the city of Newport.  What in the world?  Newport, Michigan is a nice town, but not on today’s agenda.  (I know my friend Ann Marie is reading this post and smiling, maybe even laughing, at me getting lost – she gave me the directions the last time and I was fine, so go figure.)  I think Google Maps messed up on the mileage estimate – bigtime!

So I turned around and headed back.

I found the sign for Pointe Mouillee – not a very big sign, but I had made a mental note the last trip, that the next time I returned, my marker would be a homeowner’s post-style mailbox that had a largemouth bass instead of the traditional style box.  Of course – after I saw it, I remembered that distinctive mailbox which looked like this:

Then I had to drive a few more miles down Campau Road, a really rural and narrow street, full of ruts and potholes, plus a series of little crossover bridges enroute to get to Pointe Mouillee.  Just like my prior trip, all that was there was the State Game Area Headquarters and that is where the Huron River splits and forms this little island in the middle of nowhere.

Well, I didn’t go all this way without having a look-see.  Last Summer there were way more people around as they had their boats and trailers and were fishing.  Now it was really deserted, even the lookout point and pier were empty.

The marsh looked the same as in the Summer, only everything was dried up and the tall reeds and phragmites were waving in the stiff wind. 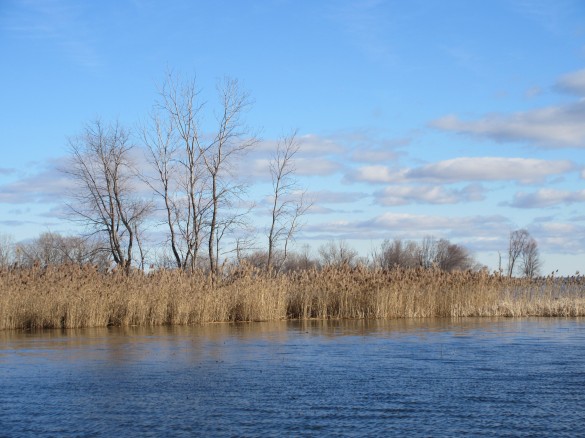 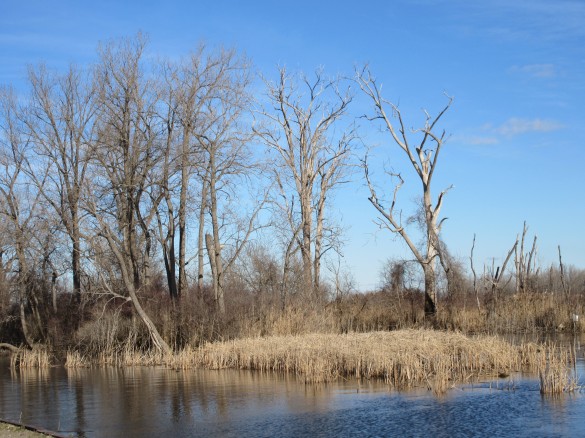 The flag snapped with each gusty puff of air, still at half-mast following the death of former President George H.W. Bush. 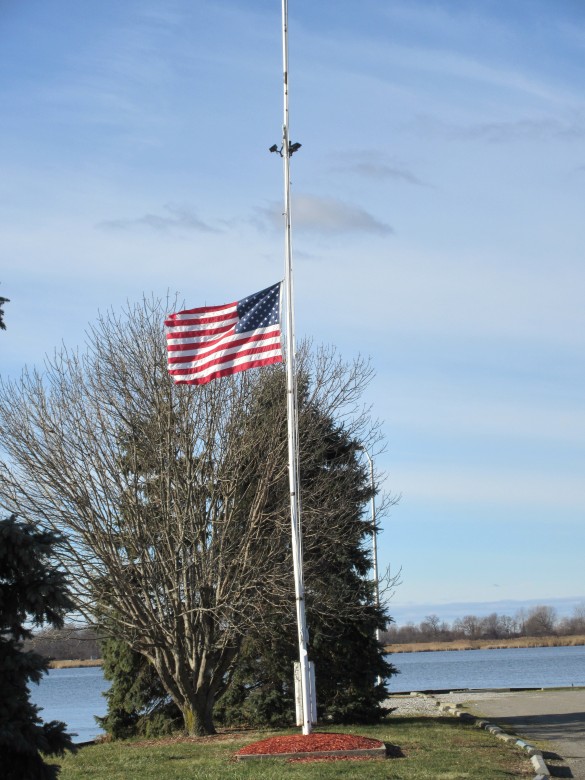 There was a freighter and if I’d had my binoculars I could have read the name.

I saw Fermi 2, which just came online again Thursday.  Its steamy cloud was billowing throughout the sky.

There were no birders, no birds and no humans.  I felt a little uneasy, out in the boonies, two or three miles from the main drag, and not a soul around.  I decided it was a little too isolated for comfort, so I took a short tour, got a few pictures and headed back to the car.  In August, the Detroit Audubon has an organized hike with their group – that might be the way to go.

I next headed to Lake Erie Metropark and spent about three hours there – I’ll write about that trip in an upcoming post as I took a lot of photos.  It was a sunny and brisk walk along the coastline of Cove Point where the waves were crashing against the huge boulders.  I walked to the desolate-looking marina, then did several more miles to retrace my steps back to the car.  Then, I took a different route than I usually do, just to sightsee, all the while hoping I did not lose my way inside the Park – yikes!  After walking 5 ½ miles I decided against heading to the Cherry Island Trail, and opted instead to stop at Council Point Park and walk one loop, hoping to see a few squirrels since I missed them two mornings in a row and tomorrow we have freezing rain on tap, so no walk.  A few of my chubby friends came running over to see me.  So, my last mile was walked there.  By the time I got home, my oatmeal was in my toes!

This is my first blog and I enjoy writing each and every post immensely. I started a walking regimen in 2011 and decided to create a blog as a means of memorializing the people, places and things I see on my daily walks. I have always enjoyed people watching, and so my blog is peppered with folks I meet, or reflections of characters I have known through the years. Often something piques my interest, or evokes a pleasant memory from my memory bank, so this becomes a “slice o’ life” blog post that day. I respect and appreciate nature and my interaction with Mother Nature’s gifts is also a common theme. Sometimes the most-ordinary items become fodder for points to ponder over and touch upon. My career has been in the legal field and I have been a legal secretary for four decades, primarily working in downtown Detroit, and now working from my home. I graduated from Wayne State University with a degree in print journalism in 1978, though I’ve never worked in that field. I like to think this blog is the writer in me finally emerging!! Walking and writing have met and shaken hands and the creative juices are flowing once again in Walkin’, Writin’, Wit & Whimsy – hope you think so too. - Linda Schaub
View all posts by Linda Schaub →
This entry was posted in Uncategorized and tagged Lake Erie, Marsh, nature, Owls, walk, walking, Winter. Bookmark the permalink.

52 Responses to Owl be seeing you …