This morning I decided to expand my horizons a little and try a different venue.

I know the nature lovers out there are saying “well, this doesn’t look like Linda’s usual shtick” … but don’t let the appearance of this wall festooned with graffiti fool you.

A fellow blogger who lives fairly close to me offered a few suggestions for nature locales around our area.  So, when my new cyber pal/fellow blogger, Pril, asked me if I’d ever been to the Southgate Nature Center, I was mystified that it even existed – a nature area the next city over?  So, my fingers flew over the keyboard to Google where I discovered this little nature nook a mere 5 ½ miles from my house, tucked next to Southgate Anderson High School.  Why have I never heard of it and does Ann Marie, my friend and fellow walker who lives in Southgate know about it?

So, I made this my first pit stop on this morning’s meander then topped that trek off with a trip to Heritage Park.

I arrived there around 9:30, and almost missed it, as it is set back from the high school a bit.  Luckily the sign for the nature center was big enough, because I have the worst sense of direction, and despite glancing at the map again before I left, I figured I’d just remember the cross streets without a hitch.

I set out on a paved path … 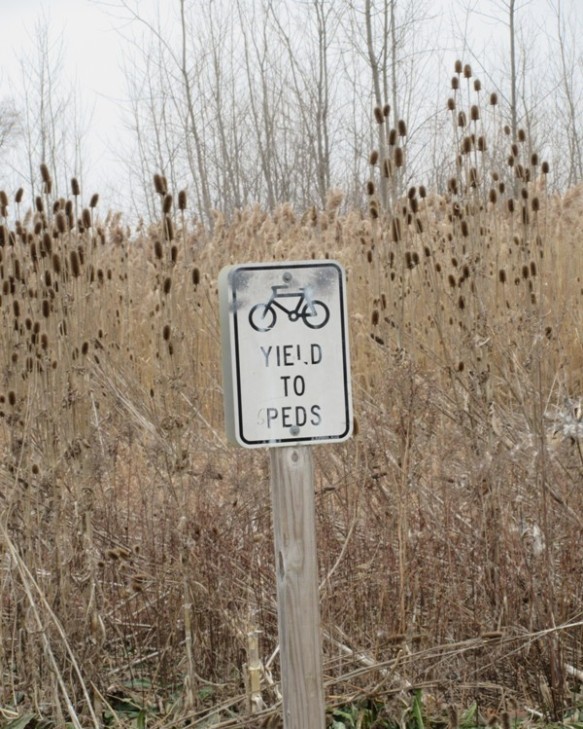 … which soon became a little more rustic as it incorporated a small trail that led directly into a field of bulrushes, burrs and phragmites, the latter which were waving back and forth in the stiff breeze.  The walk was reminiscent of my trip to Pointe Mouillee last week.  My foray into these tall reeds reminded me of those huge corn mazes you can go through at harvest time, i.e. you can’t see where you are going ahead and just hope for the best. 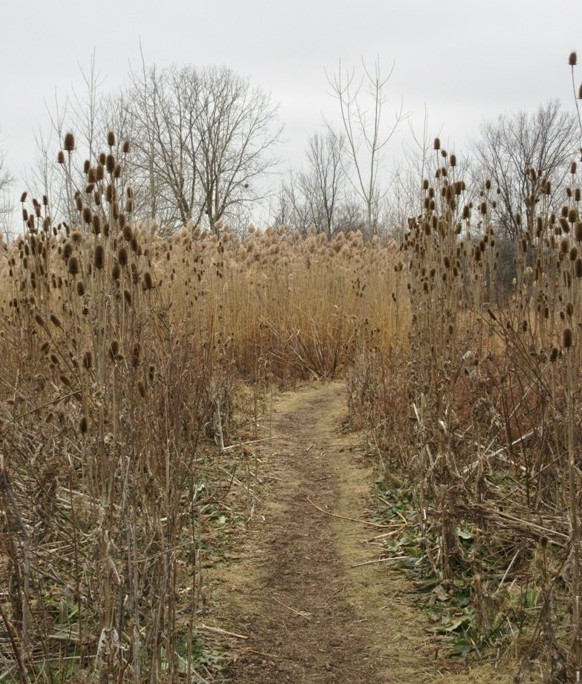 It was nippy for picture-taking, and my fingers were feeling frosty, even with the flip-top mitts.  That’s because the wind-chill made it feel like 23 degrees F (-5 Celsius) and the gray and gloomy sky did not yield any sun rays today, so I felt an occasional shiver as I walked along.  But, despite that cold, I was thinking warm thoughts when I saw the many milkweed plants and their pods full of fluff and seeds. 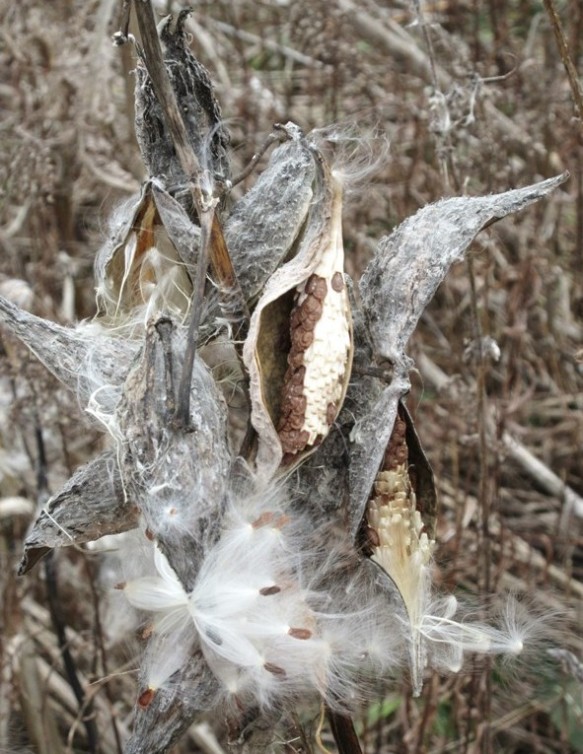 This old rotting wooden stump looked kind of interesting and I am sure it has been the subject of many photos as people pass it on the pathway.

I continued on my way, sometimes treading on a wooden pathway and other times walking along a paved path.

There was much ice in the sunken areas of grass and gullies, evidence of our recent rains which all looked to be frozen solid. 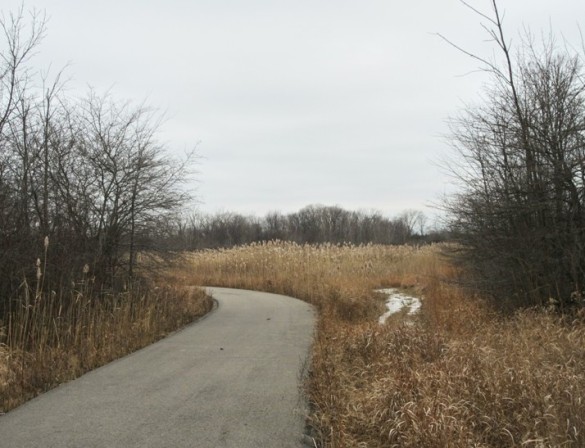 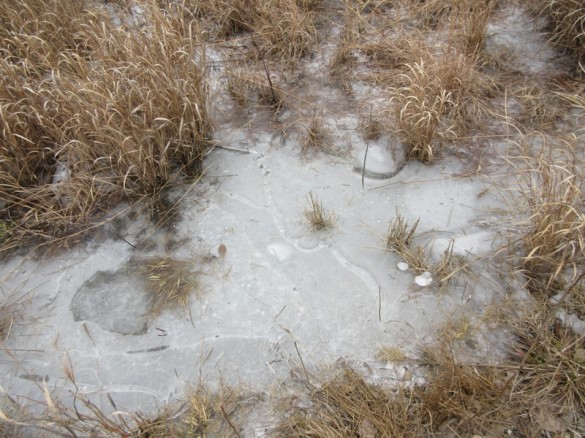 The monotones of a gray sky and pale-colored reeds made it very desolate in this marshy area.  At a glance the phragmites looked a little like wheat.

I was careful not to brush up against the teasel which was growing everywhere; these were several feet taller than me and silhouetted against the gray sky.

I arrived at a long wooden footbridge which spanned across a creek.

I had not seen a sign of any wildlife thus far on my trek, but soon heard the unmistakable call of a blue jay and also a cardinal.  I was unable to locate the blue jay, but I watched a male cardinal flitting from tree to tree.  I dug in my pocket for peanuts (like the pedometer, they are a staple whenever I leave the house) and I held it between two fingers, trying to entice that beautiful red bird to come down to the wooden bridge.  He flew away, so perhaps I had spooked him, so I decided to leave my calling card on the top railing, then I moseyed along.

Halfway across the bridge, I turned around to see if the cardinal had swooped down to land on the railing to retrieve his peanut and noticed the graffiti which I featured at the top of this post.  Whoa!  Here I was in the middle of a blah-colored marshland and these colorful images took up an entire wall which was as wide as the creek.  You can see a wire grate at the bottom of the wall, so I guess this is how the wall was decorated.  Amazingly, without a hint of sun, the colorful images made a stunning reflection on the surface of the creek.  There were a few ducks paddling around as well.

I crossed to the other side of the footbridge and found this mini-waterfall.  The water was gurgling and spilling over and reminded me of a brook as it gushed over the man-made stones.

I kept on the pathway, and along the way, I had to dodge icy areas where the pathway was sunken down and it had filled with ice and leaves.

I stayed on the pathway until the very end where I found busy Pennsylvania Road.  Cars were whizzing by and there was a huge church there, so it looked like the end of the road for me and time to retrace my steps and head back.

I finally saw a few people so I didn’t feel so alone, because, I have to admit for a time, once again, I wondered about wandering around amongst the tall reeds, although this was hardly the middle of nowhere like last week, but there were a few places that were off the beaten path.

As I crossed the wooden footbridge, I noticed that my peanut was gone … see, I did have eyes watching my every move, just as I suspected.  I should have left a few more for the cardinal for an afternoon snack.

There was a whole lot of honking going on as approximately 25 Canada geese announced their arrival.  They flew overhead in almost-perfect V formation, though that perfect form quickly fell apart as you’ll see below.

I passed the marshy area and took one last look before heading to the car. 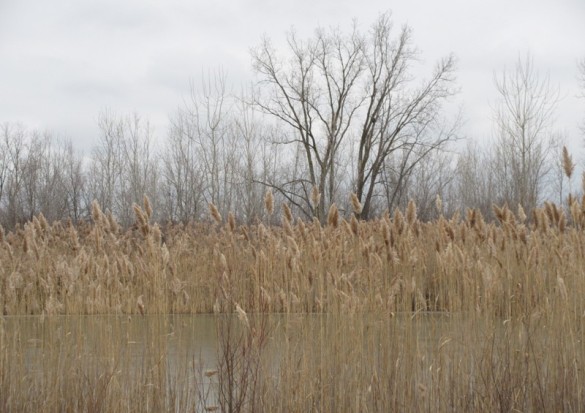 Just like Council Point Park, which is embedded inside a residential area and in the middle of a city, you step away from a natural area to a residential neighborhood in minutes.

I am glad that I stopped by the Southgate Nature Center.  My second destination on my morning agenda was Heritage Park, which was three miles away.  The ducks were huddled together in groups on one side of Coan Lake and I felt badly for them.  I will write about that visit in a separate post.  I walked six miles today and made it a point to walk that amount, as I wanted to mark 50 miles (80 kilometers) walked to date in 2019 as of today … onward and upward!

This is my first blog and I enjoy writing each and every post immensely. I started a walking regimen in 2011 and decided to create a blog as a means of memorializing the people, places and things I see on my daily walks. I have always enjoyed people watching, and so my blog is peppered with folks I meet, or reflections of characters I have known through the years. Often something piques my interest, or evokes a pleasant memory from my memory bank, so this becomes a “slice o’ life” blog post that day. I respect and appreciate nature and my interaction with Mother Nature’s gifts is also a common theme. Sometimes the most-ordinary items become fodder for points to ponder over and touch upon. My career has been in the legal field and I have been a legal secretary for four decades, primarily working in downtown Detroit, and now working from my home. I graduated from Wayne State University with a degree in print journalism in 1978, though I’ve never worked in that field. I like to think this blog is the writer in me finally emerging!! Walking and writing have met and shaken hands and the creative juices are flowing once again in Walkin’, Writin’, Wit & Whimsy – hope you think so too. - Linda Schaub
View all posts by Linda Schaub →
This entry was posted in Uncategorized and tagged Desolate, Marsh, nature, walk, walking, Winter. Bookmark the permalink.