I am not musing too much these days – no witty words are escaping my mouth and travelin’ to my fingers as they peck the keyboard.  Nope, if anything is coming out of my mouth, it is a frosty vapor from the frigid temps we have experienced the past three days.  Today, during the dinner hour, freezing rain was on the menu, but tomorrow we’ll be 40 degrees warmer and regular rain all day.  Thursday and Friday we’re back in the deep freeze, so most likely all that rain will freeze on the sidewalks.

I hope Parker and his pals have a shovel to dig through all that snow and ice to access their nuts – better yet, I hope they used sticky notes to help find those peanuts like this squirrel did in this cute vintage commercial:

The big snowfall on Saturday is old hat now.  We ended up with a total of six inches in Saturday’s snow event and that was topped off with the bitter cold.  I’ve been letting all the taps drip, running several small loads of laundry daily to keep the pipes warm and trudging out to run the car for fifteen minutes every morning.  Alas, Old Man Winter has not only settled in, but has his feet up on the hassock and is reading the paper and prepared to settle in for a long visit.  Sigh.

Well, yesterday was a holiday as we know – the commemoration of Martin Luther King, Jr.’s birthday, but it was also “Squirrel Appreciation Day”.  No, I did not make it up and here is a photo to prove it – I saw it on the internet, so it must be so!

I felt badly as I let down the crew at the Park, and, though I tried to feed my porch squirrels while I was outside, they did not show up.  I am sure that -15 wind chill kept them snuggled together in their nests for most of the day.  I was relieved to see those peanuts I left tucked under the front stoop were gone this morning when I went out to run the car.  Whew!  I worry about my furry friends, because last week I saw two large Cooper’s Hawks sitting in a tall tree on the cross street.  I happened to be taking the car for a run to the Park Thursday morning since Friday morning snow was predicted.  I saw the pair of hawks while backing out of the driveway.  When one flew off, I quickly followed it.  I watched that hawk alight on a branch and I had a chance to study it.  I had no time to take a picture as my camera was buried under my coat, and I was driving, but I remembered the markings from the encounter with the Cooper’s Hawk and Stubby last Summer – you will recall, I had just fed that squirrel who is missing half his tail, and just as Stubby began to dig into his peanut pile, the hawk swooped down out of nowhere – Stubby ran as fast as those short four legs could carry him and scurried under a picnic table in the pavilion area.

Thursday night I alerted my neighbors, both who have small dogs – one said “I saw a hawk in your yard and ours and the hawk got a squirrel” … well, I had a sick feeling after reading his reply, so Friday morning I abandoned the idea of putting out the peanuts from the front door before I went outside, not wanting to make Grady and his pal “sitting ducks” and I opted instead to feed them when I went outside and wait for them.  So, Friday morning I went outside – a light covering of snow had fallen and there were lots of squirrel paw prints on the porch and steps. 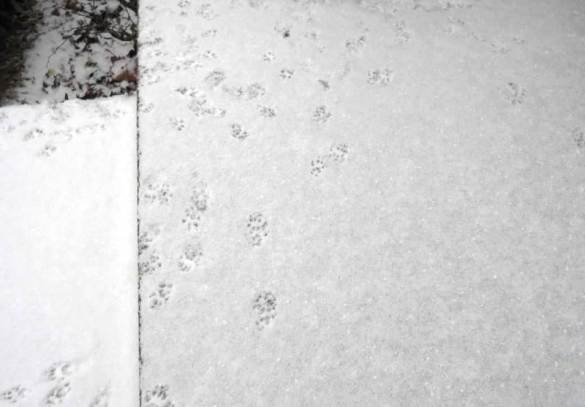 Aww … they knew our routine from all these weeks and were waiting on me and likely thought I forgot them.  No fellas … I didn’t forget you, just trying to be careful and spare your lives.

Before laying any peanuts out, I glanced all around at the tall trees … 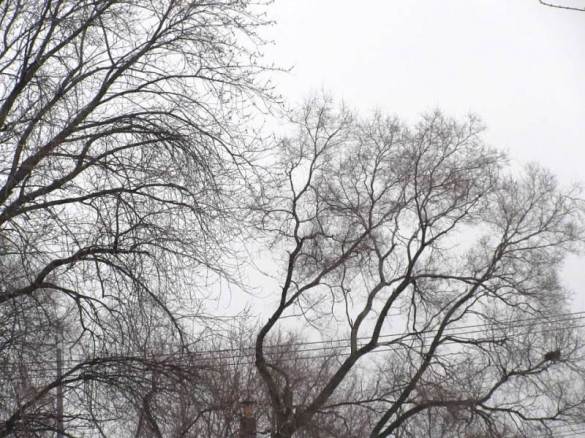 … luckily I saw no hawks, so I felt comfortable leaving them their treats.

I am savoring those many mornings I stepped out in December and January … like I said in my recent post, sometimes you just have to seize the day.

P.S. – Today is “National Blonde Brownie Day” just in case you’ve had a treacherous ride home and care to whip up a quick batch?

This is my first blog and I enjoy writing each and every post immensely. I started a walking regimen in 2011 and decided to create a blog as a means of memorializing the people, places and things I see on my daily walks. I have always enjoyed people watching, and so my blog is peppered with folks I meet, or reflections of characters I have known through the years. Often something piques my interest, or evokes a pleasant memory from my memory bank, so this becomes a “slice o’ life” blog post that day. I respect and appreciate nature and my interaction with Mother Nature’s gifts is also a common theme. Sometimes the most-ordinary items become fodder for points to ponder over and touch upon. My career has been in the legal field and I have been a legal secretary for four decades, primarily working in downtown Detroit, and now working from my home. I graduated from Wayne State University with a degree in print journalism in 1978, though I’ve never worked in that field. I like to think this blog is the writer in me finally emerging!! Walking and writing have met and shaken hands and the creative juices are flowing once again in Walkin’, Writin’, Wit & Whimsy – hope you think so too. - Linda Schaub
View all posts by Linda Schaub →
This entry was posted in Uncategorized and tagged Hawks, nature, snow, Squirrels, Winter. Bookmark the permalink.