Hmm – It sure is hard to get traction … 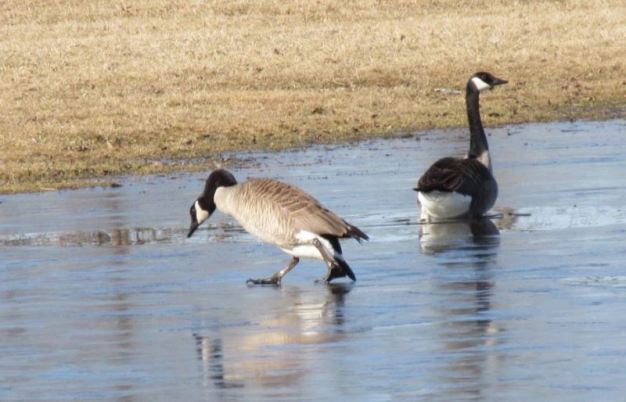 … on the ice, or regarding my walking regimen.  Grrrr!

We’ve got another crummy weather day here in Southeast Michigan.  The rain has been falling since last evening.  The weather folks tell us we’ll get up to two inches of rain that has the nerve to morph into snow flurries and accumulate maybe an inch before dawn.

To add insult to injury, today is “National Take a Walk in the Park Day” so needless to say I didn’t celebrate this event.

All was not lost as I slept in (much too late, when left to my own devices by electing not to set the alarm clock), however, this soggy Saturday allowed me to finally spin out a post about my trek to Lake Erie Metropark one week ago today.  I’ve been swamped at work and eked out one post this week, and I am sorely behind in social media correspondence, not to mention catching up with fellow blogger’s posts in Reader.

Roaming along the coastline of Cove Point.

When I left the house last Saturday, it was just 23 degrees F (-5 C), but the car needed a long run and I needed a change of pace, so Lake Erie Metropark was my go-to spot.  I left the peanuts at home as they have signs everywhere that it is forbidden to feed any wildlife at the park.  Go figure, because I’m sure any of the feathered or furry friends that crossed my path would have loved a peanut, but I’m not paying any fines or risking being prohibited for returning to the park for breaking their rules.  The critters at this venue don’t pay you any attention because they know better than to beg, or even hint, for treats.  Sad isn’t it?  I sure hope there was/is plenty for them to forage to stay alive, especially after the brutally cold Winter we’ve just endured.

Speaking of cold weather, it was officially the first weekend of Spring, but you sure wouldn’t have known it if you saw how I was bundled up, because most of my trek would be along the Lake Erie shoreline and it’s always colder down by the water.  I donned a down jacket, Sherpa-lined hat and wore many layers, not to mention that I had gloves with liners, to take photos and my fingers were still cold.

There were very few people out on this frosty morning and the first person I saw was this young woman who jogged past me in short shorts and a light hoodie. 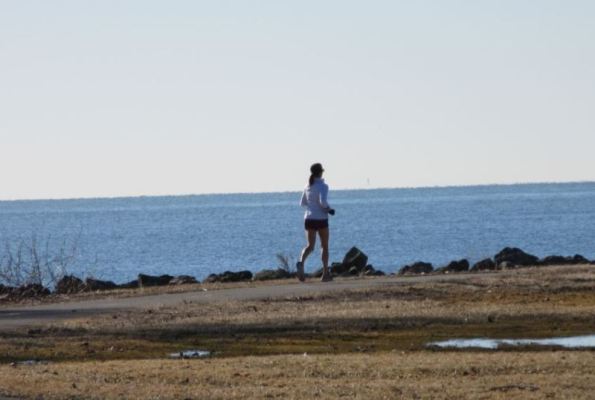 Now one of us did not dress properly for the cold weather and maybe there should have been a happy medium?  I grew up hearing the expression “wear lots of layers as it’s always easier to remove an article of clothing, than wish you had worn something warmer” … (so am I just an old fuddy duddy with all my layers of clothing … never mind, don’t answer that).

I really wondered what was going on in the distance and I strained my eyes to see, but I suspect it was some type of dredging operation. 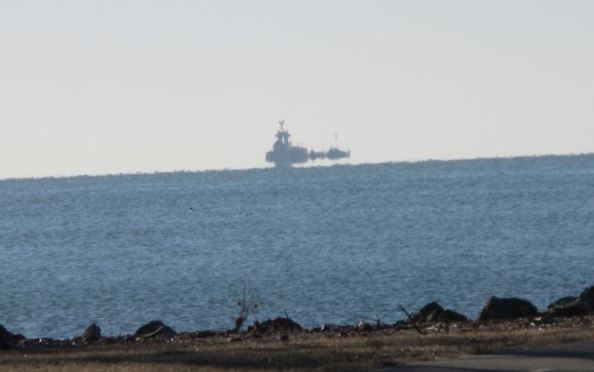 Just like Heritage Park the weekend before, the frozen ground was unable to soak up all the rain we’d had, so pools of water had gathered in low-lying areas. 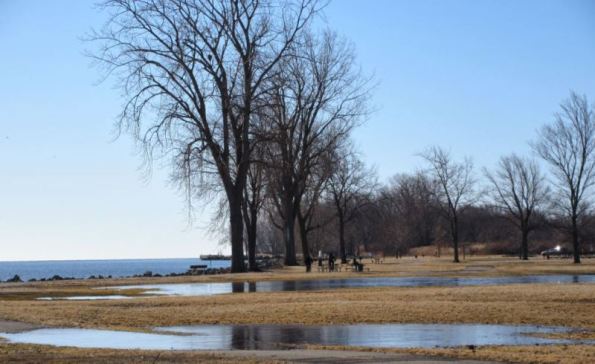 Unfortunately, the rainwater had also spilled over the cement walkway making large patches of glare ice. 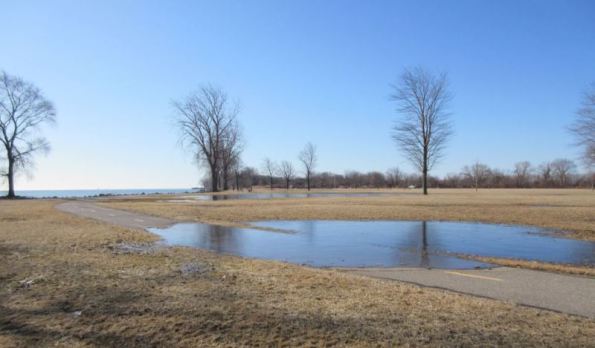 I had hoped to avoid an icy trail walk by concentrating on this venue’s winding cement pathway, but that was not the case, so I spent more time navigating around the icy patches and walking on the half-frozen grass.

Oh well, a walk along the Lake Erie shoreline was pleasant enough. 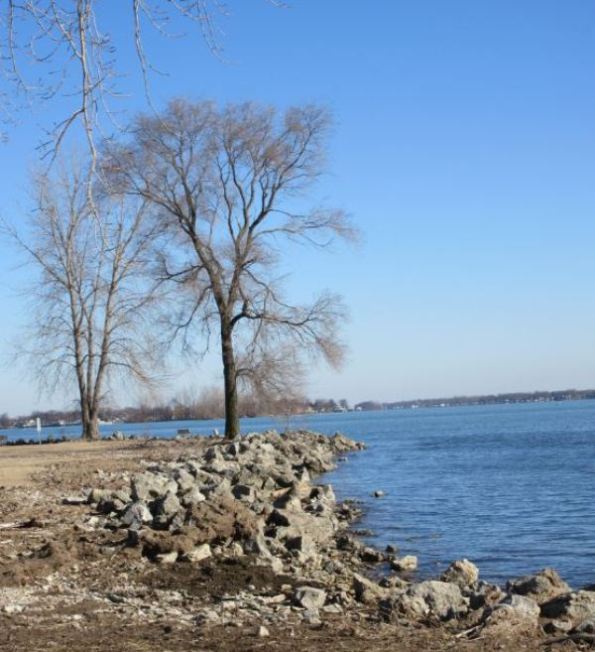 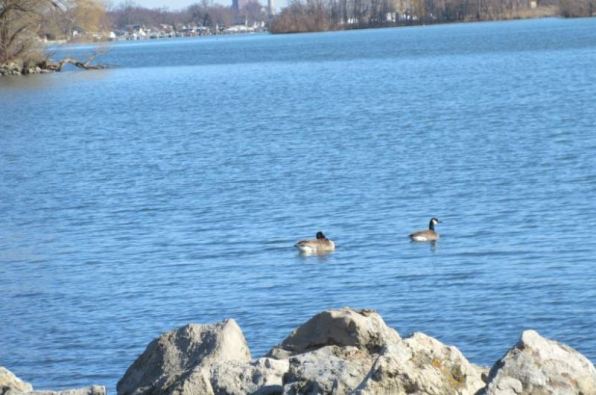 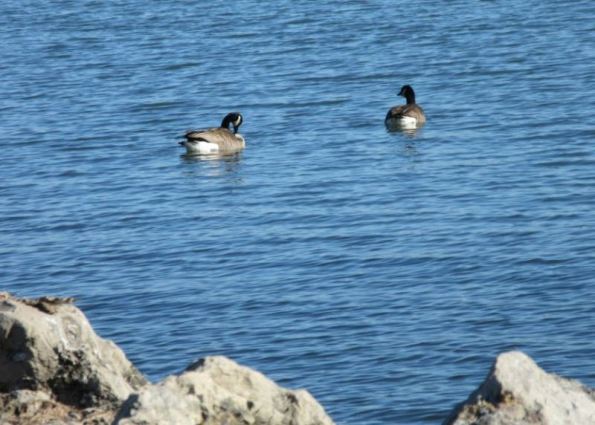 Not all the Canada geese were enjoying a chilly swim in Lake Erie.  A few decided to try out one of these makeshift mini-lakes as their own personal pond.  So how did that work out?  Well let’s take a look below.

A closer inspection of the icy surface proved to be no dice on the ice for this goose, who took a quick gander, then walked away. 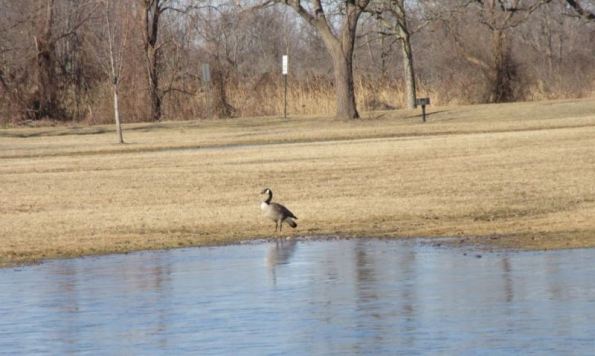 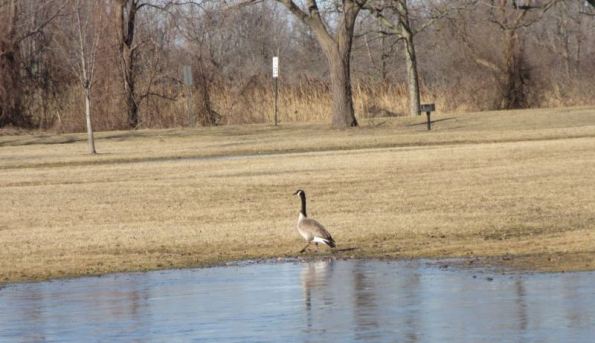 With a whir of wings, it soon took flight to join its brethren I had just passed while walking along Cove Point’s shoreline.

Yet, there was something about this sparkling pool of water that remained a lure from high above.

Descending from the sky with loud honks, these two Canada geese, though synchronized and graceful in the sky, were rather klutzy when they arrived feet first, as their wide-webbed feet met the unforgiving surface, and in short order their feathery bums thwacked against the ice.  Clearly they were not happy with this particular polar plunge. 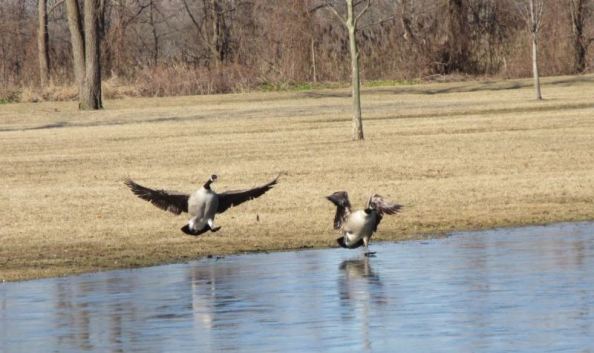 And how pleasant could it be to stand in thigh-high water? 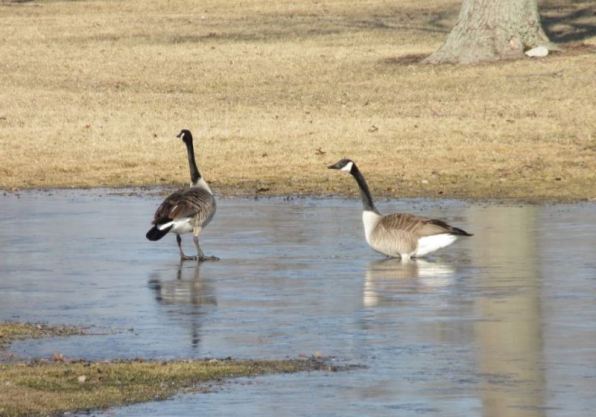 But, there they were, and glancing up in the sky perhaps to warn any others of this bum steer? 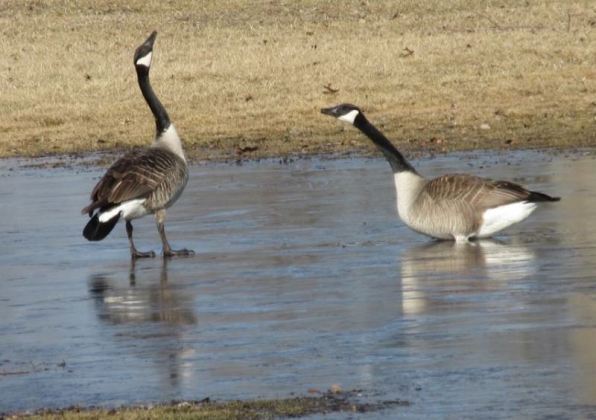 Alas, they decided to make the most of their personal pond, though I’m sure they regretted the decision to descend into this icy mess. 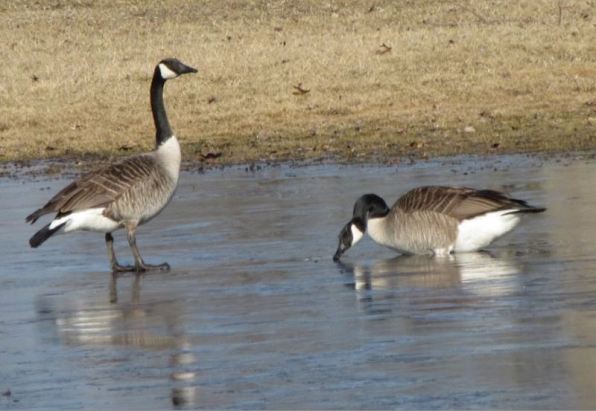 Meandering around the marshes.

After completing a trek along the three-mile (5 km) shoreline, I next headed to the opposite side of this massive Park where the marshes and lagoons are located.

I parked by the Marshlands Museum and stopped to say “hi” to Luc, the resident eagle … 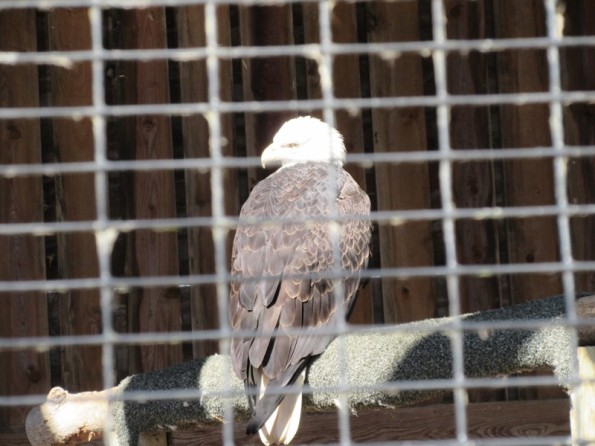 … before heading onto the Cherry Island Trail, which, not surprisingly, was a little icy in spots.  The trail is uneven to begin with, so with ice on it, I opted to switch between the paved road that goes to the boat launch area and then walk along the wooden overlooks. 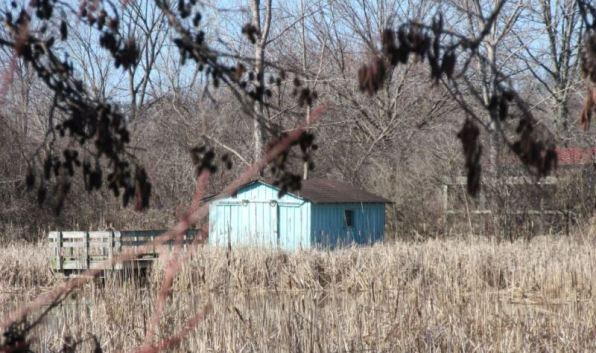 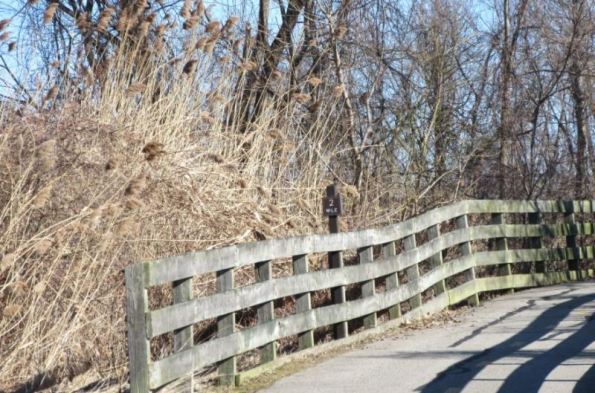 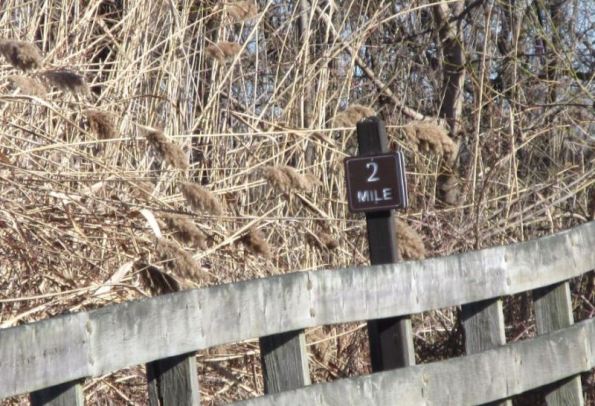 There is nothing like the trill of the Red-Winged Blackbirds as they fly about the marshy portions of this large park.  They are large birds and their voices seemed to echo as I walked along in the still morn.  These birds are quick to follow you along the perimeter path at Council Point Park, but not for the sake of companionship – they merely want a peanut and they’ve been known to hop down in front of me or swipe one from right underneath a squirrel’s nose. 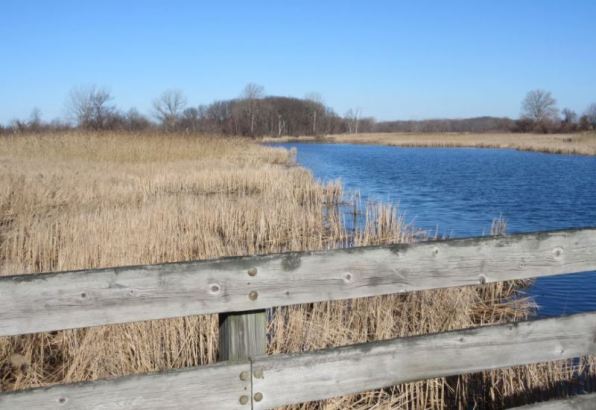 There were plenty of waterfowl in the lagoon area, including a pair of swans that glided effortlessly through the water, alternating between paddling and diving for breakfast. 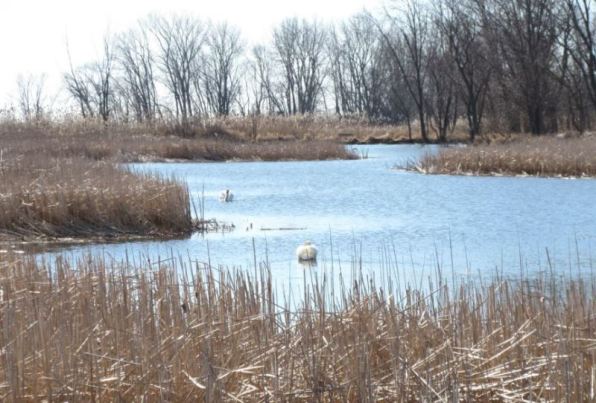 They posed for me … 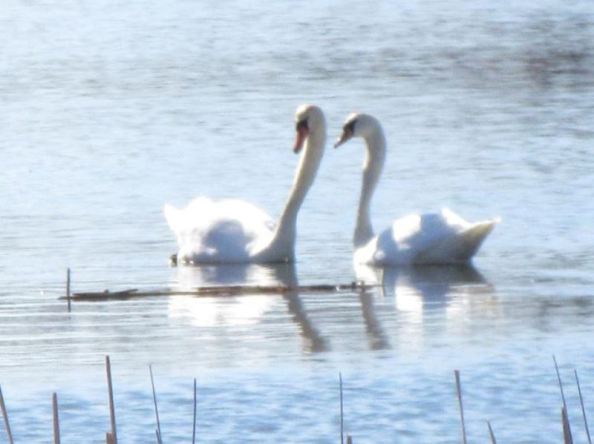 … and, I even got a half-hearted pose; unfortunately, they would not arch their necks to make a complete heart. 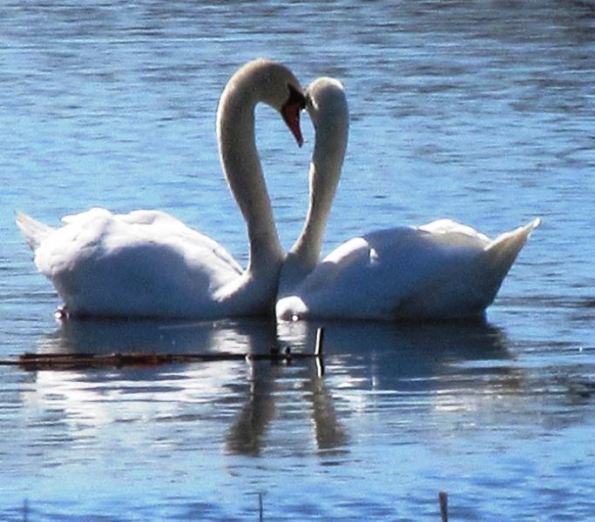 The trail continued to the boat launch area. 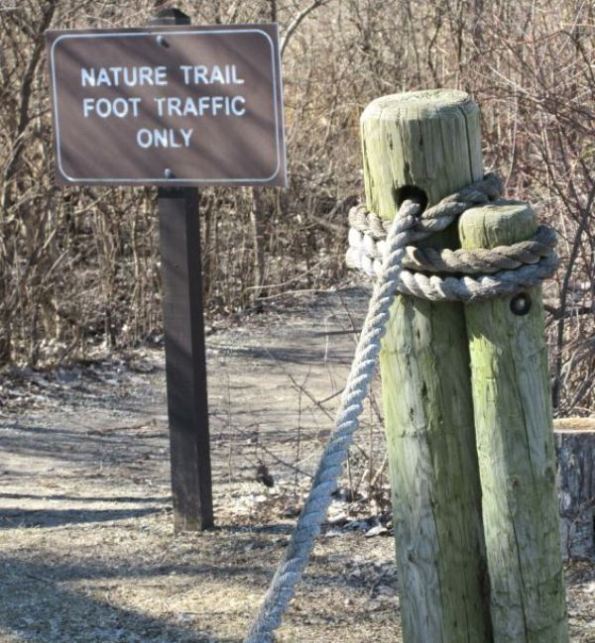 I noticed the buoys were still piled on the deck and a few boaters already had their pride and joy ready to take a spin on Lake Erie . 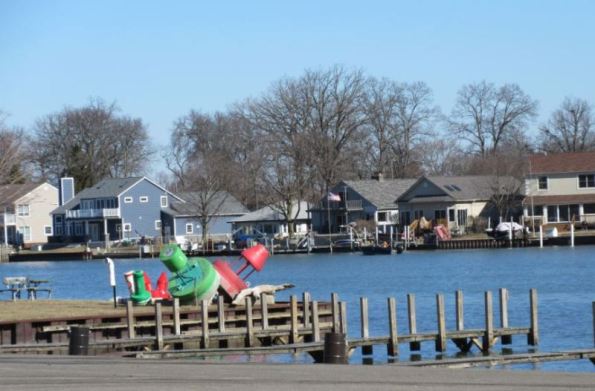 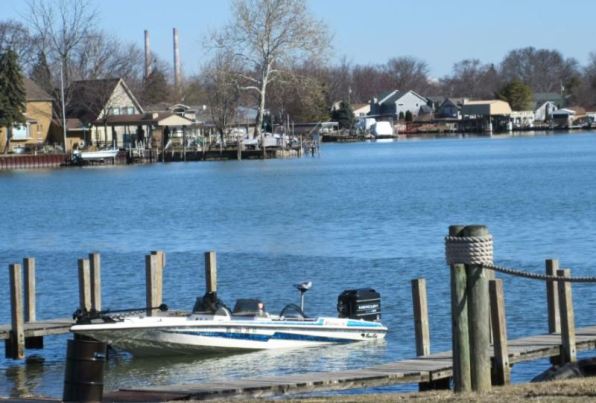 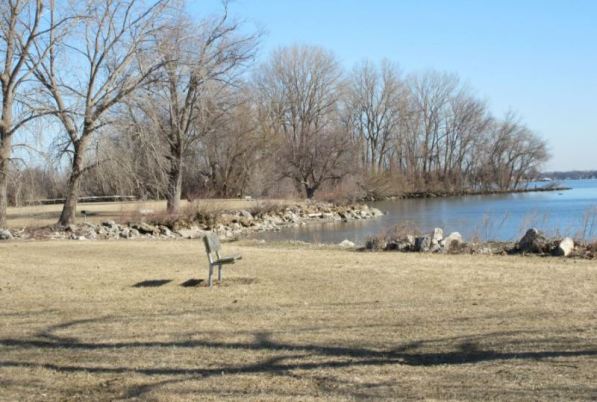 …but I intended to stop at Dingell Park to see if the eagles were still there, so I departed this park, cold and hungry, but with rosy cheeks and a rosier disposition.

This is my first blog and I enjoy writing each and every post immensely. I started a walking regimen in 2011 and decided to create a blog as a means of memorializing the people, places and things I see on my daily walks. I have always enjoyed people watching, and so my blog is peppered with folks I meet, or reflections of characters I have known through the years. Often something piques my interest, or evokes a pleasant memory from my memory bank, so this becomes a “slice o’ life” blog post that day. I respect and appreciate nature and my interaction with Mother Nature’s gifts is also a common theme. Sometimes the most-ordinary items become fodder for points to ponder over and touch upon. My career has been in the legal field and I have been a legal secretary for four decades, primarily working in downtown Detroit, and now working from my home. I graduated from Wayne State University with a degree in print journalism in 1978, though I’ve never worked in that field. I like to think this blog is the writer in me finally emerging!! Walking and writing have met and shaken hands and the creative juices are flowing once again in Walkin’, Writin’, Wit & Whimsy – hope you think so too. - Linda Schaub
View all posts by Linda Schaub →
This entry was posted in Uncategorized and tagged nature, Spring, walk, walking. Bookmark the permalink.

81 Responses to Hmm – It sure is hard to get traction …