I sure am glad I don’t live in the northern ‘burbs because they’ve been blasted with snow the last week or so, and we’ve remained unscathed.  Whew!

Monday morning when I left for my walk, the blah-looking lawns looked sugar-coated from a heavy frost, and I heard, before I saw, my neighbor scraping her car windshield rather vigorously so she could get going on her long commute to work.  I wasn’t sure which was louder, the cursing or the ice scraper as it grated across the glass.  Ouch!  The gray sky and blustery wind made the 25-degree temperature feel pretty brutal for the second week in March, so I wasn’t surprised to arrive at the Park and discover I was the only one there and I mean the ONLY one.  The entire Creek was frozen over, so no ducks or geese were in the water, and the squirrels decided to hunker down in their cozy nests.  There was not even a single cheep or tweet coming from the trees.

Thus, it was one of those days to just get the steps done and not sightsee or meander off the beaten path.

Today, at least the sun put in an appearance, though it was a pale imitation of the real deal, and it was a whopping 28 degrees.  The Creek was still frozen over, so no ducks or geese, nor the elusive heron, were out and about.  But, that sun apparently made all the difference in the world to the squirrels, because I had a welcoming committee and a lot of tap dancing around my feet while I struggled to get the Ziploc bag of peanuts opened without removing my gloves.  The more I fumbled, the more impatient they grew.  I must have a better method to dispense peanuts in the Winter time … I’ll work on that for next Winter.  Meanwhile, let’s get over this Winter first.  A week from today is the first day of Spring, and, I suspect it will be a calendar date only, since there is no significant warm-up slated for the near future.  But … it could be Boston – oh, those poor Bostonians.

After all the hype, March Madness has finally arrived.  I have a little March Madness of my own to share – another shadow picture, though I am missing my sidekick for this photo.  Last week, you’ll recall, I had a blogpost featuring a delightful photo of Parker and me and our respective shadows.   I often feel like I am shadowed by this cute little squirrel when I am at the Park, so to call that post “Me and my shadow”  actually had a double meaning.

The long angles of the sun in the morning create some interesting shadows sometimes.  While walking through the neighborhood, enroute to the Park, I hurriedly snapped this image because one glance at my shadow reminded me of my mom’s old-fashioned clothes pegs back in the day.

I am originally from Canada and there are some vocabulary words which are different from over here in the States.  I can ramble off a list like “serviette” for napkin, or “toque” for knit cap, or there is “chesterfield” for couch, and on and on the list goes.  In Canada, those clips you use to attach your wet laundry to the clothesline were “clothes pegs” not “clothes pins” and long after we moved to the States in 1966, my mother still called them “pegs”.

Mom was a trooper about hanging out the laundry as soon as the snow melted in April, and she did so until the first flurries flew in November.  She’d hang those clothes on her pulley line, reel them out in the morning and reel them back in when they were dry, sometimes cold and stiff as a board, and yes they did smell fresh and clean, but is sure was not as easy as popping them in the dryer.  And did I mention she used a wringer washer in those days too?

Anyway, I saw my shadow and just knew I had to find an image of an old-fashioned clothes peg.  I really wanted a vertical peg to put side-by-side with my picture, and I scoured all my photo resources for one, to no avail.  Unfortunately, there are no more “pegs” to be found in this home, so I am using this image instead. 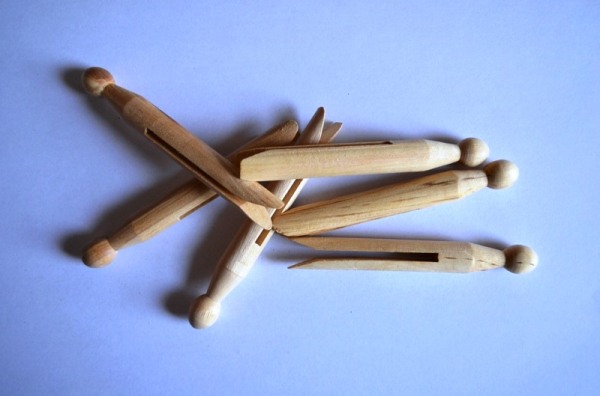 I’ve woven a little of my own March madness into this official kickoff to college basketball’s March Madness event.  It’s a time for stats and wins and losses, not only your teams, but if you have a little money in those games as well.

As for stats, while walking this morning, I was thinking of all the steps I will be taking to meet this year’s goal.  Math is not my strongpoint, but I figure I must get to 150 miles walked by the end of March, and then at least another 100 miles per month thereafter, maybe even more since November and December are sometimes iffy due to snow and ice.  It wore me out just thinking about it.

But, after taking a look at this picture and seeing those extra-long legs, I think I may be up to the task!

Stride on, and strive to make that goal.  Just call me “Long Tall Sally”.

This is my first blog and I enjoy writing each and every post immensely. I started a walking regimen in 2011 and decided to create a blog as a means of memorializing the people, places and things I see on my daily walks. I have always enjoyed people watching, and so my blog is peppered with folks I meet, or reflections of characters I have known through the years. Often something piques my interest, or evokes a pleasant memory from my memory bank, so this becomes a “slice o’ life” blog post that day. I respect and appreciate nature and my interaction with Mother Nature’s gifts is also a common theme. Sometimes the most-ordinary items become fodder for points to ponder over and touch upon. My career has been in the legal field and I have been a legal secretary for four decades, primarily working in downtown Detroit, and now working from my home. I graduated from Wayne State University with a degree in print journalism in 1978, though I’ve never worked in that field. I like to think this blog is the writer in me finally emerging!! Walking and writing have met and shaken hands and the creative juices are flowing once again in Walkin’, Writin’, Wit & Whimsy – hope you think so too. - Linda Schaub
View all posts by Linda Schaub →
This entry was posted in Uncategorized and tagged humor, nature, Park, Squirrels, walk, walking, Winter. Bookmark the permalink.