A soggy Saturday, glimpses of goslings, and the robins are growing up fast.

Spring here in Southeast Michigan has really been nothing special.  May’s incessant rain has made our days dreary and dismal, with sunny days few and far between.  It has been raining since noon on Friday, sometimes torrential downpours, and off-and-on thunderstorms.  So, I slept in late on this soggy Saturday, since I knew it would be a stay-at-home day, and likely Sunday too, unless the rain finally ends.  Sigh.

But, I have been busy gathering my photos for Mother’s Day weekend blog posts, which I will use rain or shine.

The first part of this post involves the second sighting of goslings at Council Point Park last Wednesday.

As I rounded the perimeter path at the old twisted tree, there they were, the goslings and their parents, grazing by the blue metal park bench.  I’d have liked it better if they weren’t so close to the bench and I had a clearer view of the entire family, but I wasn’t about to shout “hey you guys – move over to the left a little would you?”  The family was fairly close to the walking path, so I left the path and stood on the nearby grass to get a better look at them, and thus avoid getting the gander riled up. 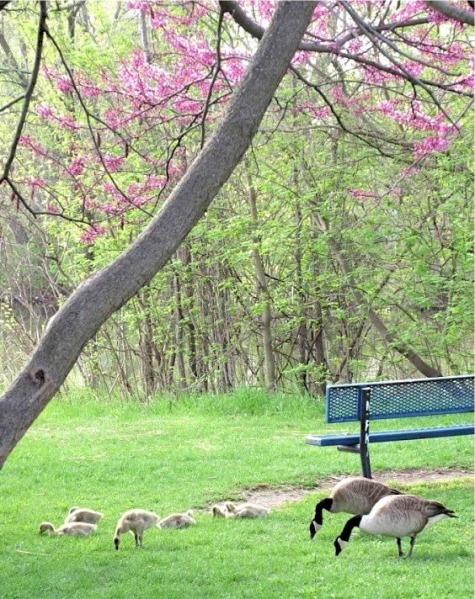 It was then I noticed a second family of geese near the dense, still-dead swamp grass.  They were headed to the water for swimming lessons.  I figured it was my lucky day, though I’d have been a tad luckier had I arrived a few minutes earlier, as I might have had two gaggles of geese and a double dose of cute goslings for my post.

I took a few more pictures, stepped back onto the perimeter path and fed some of my furry pals, then heard some commotion.  I turned around and a crowd was gathering by the goose family.

I watched some of these folks from afar as they stepped off the path and onto the grass toward the family.  The gander hissed, but there was no wing flapping.  Someone had brought food for the geese – bread perhaps – something in tidbits which could be thrown out.  By then, both the male and female were hissing, and the babies – what do you think they were doing? 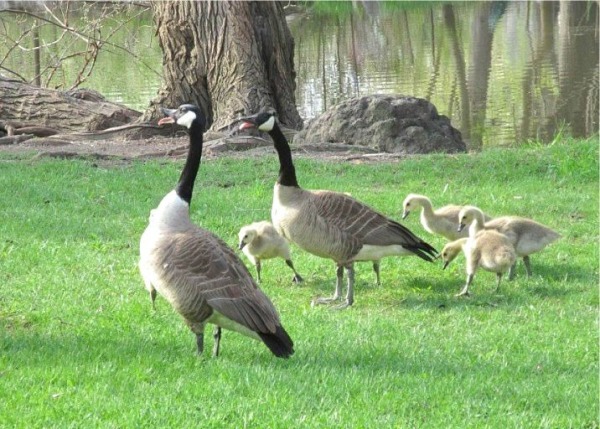 Well, if your kid is eating his veggies and someone offers up a chocolate chip cookie, those veggies are going to be abandoned in favor of a cookie in a heartbeat.  Those goslings took off running, er … waddling, toward the bread, eager to abandon the grass they had just been grazing on.

When I uploaded the photos later and realized I cut the top of the gosling’s head off, I was disappointed, but I’m using it anyway – it shows his (or her) exuberance at seeing the treats.

The goslings’ parents had calmed down somewhat and did not take any of the tidbits for themselves, but had a watchful eye over their babies the entire time.  That sudden intrusion of humans on the little clan gave me an opportunity for more photos, though I still hung back, thinking that the parents will remember this interaction, and I don’t want them associating me with it a few weeks from now, and charging after me.  Now, you might scoff at that idea, but hear me out.  A few years ago I brought a couple of bags of bread for the geese, and, there I was amidst a gaggle of them, throwing out yeasty tidbits and feeling at peace with nature … that is, until I got to the bottom of the second bag.  The geese who were fed waddled off, but about a dozen newcomers who missed out on the treat, came after me.  Yikes!  Suddenly this girl was not giggling over the gaggle of geese, but sprinting for her life to merge into a group of walkers.  Yup – I learned my lesson that day and I’ve never brought treats for the Canada geese since.

Even after the crowd departed, Mom and Dad were still having a hissy fit.  I did take some additional photos, without the pesky park bench being in the way, and this was my favorite as they walked away, perhaps for a swim with their brethren.  Guess they don’t follow the wait-for-an-hour-after-you-eat-to-go-swimming rule.

Now, it’s time to return to the robin family in Richmond, Virginia.  As you know from two prior posts, my friend Evelyn has faithfully documented the robin family since they built the nest, then laid the eggs, and the emergence of the hatchlings.

Maybe it was her newfound “grandmother instincts” settling in, but Evelyn fussed over the trio of chicks like a mother hen.  She called the vet to see if she could get something for the babies’ diet to supplement what the parents brought, but the vet said the chicks would be fine and not to worry.

The vet was right.  As you see below, Mama Robin arrived, as if on cue, beak open to drop some grub into one of those hungry mouths.

Slowly but surely, those helpless and scrawny babies born last week are starting to look more like robins.  The size of their beaks just amazes me and I’ve remarked to Evelyn “when will they grow into their beaks?”  They remind me a little of Daffy Duck in these photos.  I love that they are already clamoring for food and today one chick had an eye open.  Evelyn says the parents are leaving the nest more to retrieve nourishment to feed their young.  The following photos are from each of the past four days: 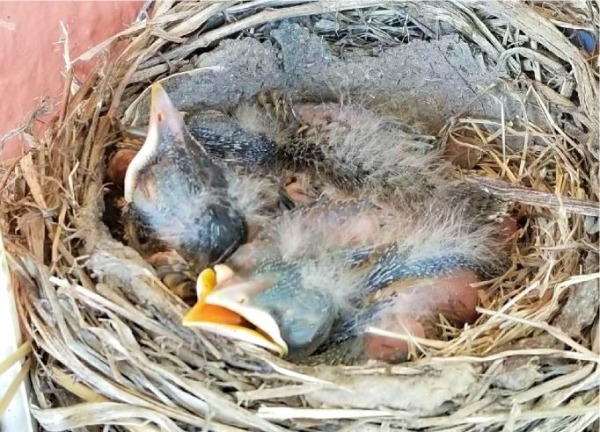 This last picture, I would like to caption: “Hi Mom, I’m awake and I see you, so I’m opening my mouth so you can just drop in a few grubs and meal worms, okay?”

I’ll leave you with this quote:

A mother’s love for her child is like nothing else in the world.

It knows no law, no pity.

It dares all things and crushes down remorselessly all that stands in its path.

This is my first blog and I enjoy writing each and every post immensely. I started a walking regimen in 2011 and decided to create a blog as a means of memorializing the people, places and things I see on my daily walks. I have always enjoyed people watching, and so my blog is peppered with folks I meet, or reflections of characters I have known through the years. Often something piques my interest, or evokes a pleasant memory from my memory bank, so this becomes a “slice o’ life” blog post that day. I respect and appreciate nature and my interaction with Mother Nature’s gifts is also a common theme. Sometimes the most-ordinary items become fodder for points to ponder over and touch upon. My career has been in the legal field and I have been a legal secretary for four decades, primarily working in downtown Detroit, and now working from my home. I graduated from Wayne State University with a degree in print journalism in 1978, though I’ve never worked in that field. I like to think this blog is the writer in me finally emerging!! Walking and writing have met and shaken hands and the creative juices are flowing once again in Walkin’, Writin’, Wit & Whimsy – hope you think so too. - Linda Schaub
View all posts by Linda Schaub →
This entry was posted in Uncategorized and tagged geese, Goslings, humor, Mom, Mother's Day, nature, Park, robins, Spring, walk, walking. Bookmark the permalink.

17 Responses to A soggy Saturday, glimpses of goslings, and the robins are growing up fast.