Mother Nature is my nemesis sometimes … 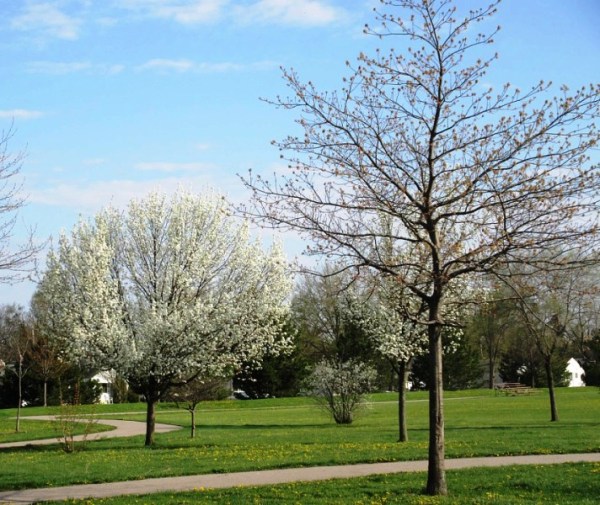 The rain, the Park and other things

The jury’s still out on whether Spring has arrived yet.  We’ve had a few more 70-degree days, as well as thunderstorms that typically whip up with all that heat and humidity, but tomorrow our high will be a mere 50 degrees.  The normal Spring weather,which we looked forward to for so long, keeps retreating into a corner.

I’m convinced we are still a month behind in that ditty we memorized way back when about “March winds and April showers bring forth May flowers” … the showers in April were of the snow variety and it seems every other day in May it pours raining or storms.  During my trip to the backyard to check on the progress of the lilacs, they had leafed out, but there were no blossoms yet.  In the neighborhood, a magnolia bush that sported huge buds just a few days ago, now is full of large open blossoms. 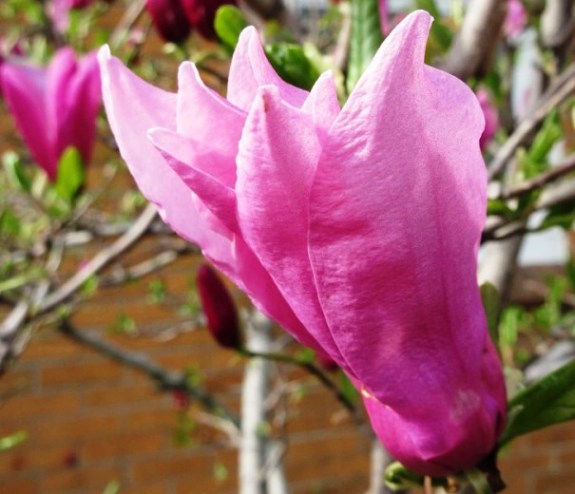 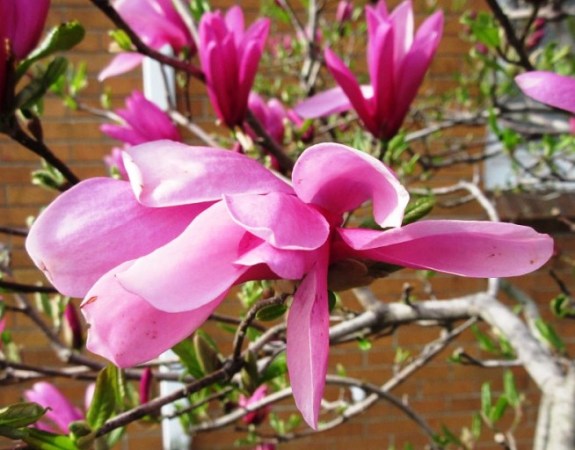 I was happy to eke out a walk this morning because the forecast originally called for rain (what else) and my trek to the Park was still kind of puddly from all the rain yesterday and overnight.  On my way there I saw a few birds bathing in the street, splashing away in the many pools of water that formed near the curb.  The robins were pecking and slurping up some long worms which had wriggled free from the earth as a result of all that rain.  Those robins wore a defiant look as I neared them, as if to say “hey you, don’t step on my worm!”  I wanted to say “don’t worry, I’ve already had my breakfast, thank you.”

I’ve scouted out some new parks to try out, but the threat of rain last weekend and the promised rain, (two inches in total), for this weekend, will have me tabling those treks a little longer.

My trip to the Park yesterday was enjoyable.  On the heels of my statement that the geese and their offspring had been missing in action the past few days, I rounded the path by the old twisted tree and there were two families of geese, with all their goslings grazing companionably alongside their parents.  This scenario was just a tease for you, because I’ll save those warm-and-fuzzy photos and narrative for the upcoming Mother’s Day holiday, plus an update on the baby robins as well.

I’ve been watching Council Point Park slowly come back to life.  Gone are those bare branches which have now totally leafed out, lending a cozier feel to the Park.  The bushes have likewise filled in, and only the reeds and swamp grass are still a dull and drab brown color.  Perhaps this onslaught of rain will green up the rest of the Park.

Angels and butterflies for a life cut short

There are many memorial trees planted around the Park.  They are all different varieties, each bearing a stone plaque of loved ones.  Some people take great care with their memorial trees, laying down fresh mulch, planting flowers, putting balloons for birthdays, or decorating for the various holidays throughout the year.

This one tree, in particular, stands out every Spring because its delicate white blossoms arrive the same time as the tulips that are planted around the memorial stone.

Butterflies with gossamer wings are fastened to the tree branches … 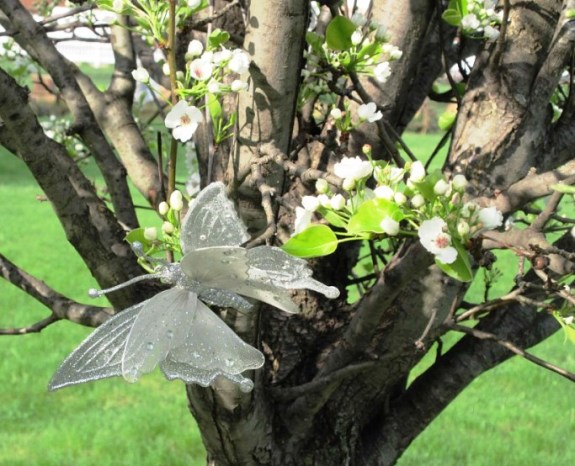 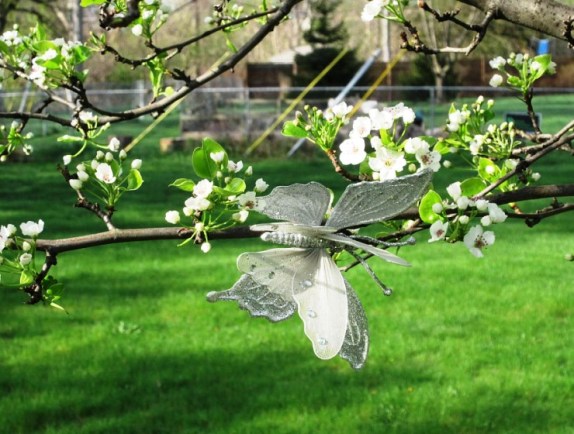 … as well as an angel with the same delicate wings.

I took a picture of the memorial stone as I wanted to know more about Erica Megan Sharick, who passed away at just 21 years old.

I thought I’d include that info with this post, but a Google search of her name revealed nothing.  All year around, there are always angels of some kind adorning this tree, or reclining near the stone.  It always makes me feel a little sad when I pass by.

On Monday the mowers arrived and cut the grass, but the dandelions have already returned.  They are in abundance, and sometimes it appears my feathered and furry friends are lost among those familiar yellow weeds. 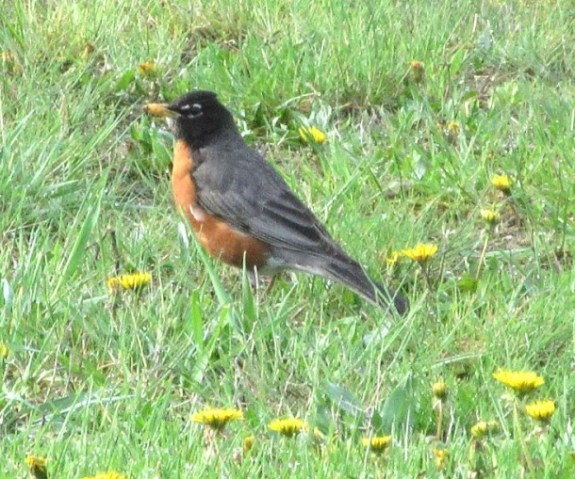 A tough nut to crack

With the advent of a rainy weekend, I’ve decided that this year’s goal will be a tough nut to crack.  My fine-feathered friends know all about that expression.  Beaks are definitely not as sharp as a squirrel’s front teeth, and, when cardinals and red-winged blackbirds swoop down to snatch a peanut from under a squirrel’s nose, they often are perplexed how to eat it afterward.  The cardinal is fairly adept if it’s a small peanut, but the red-winged blackbird, having finagled that treat, has to twist and turn it around to enjoy it. 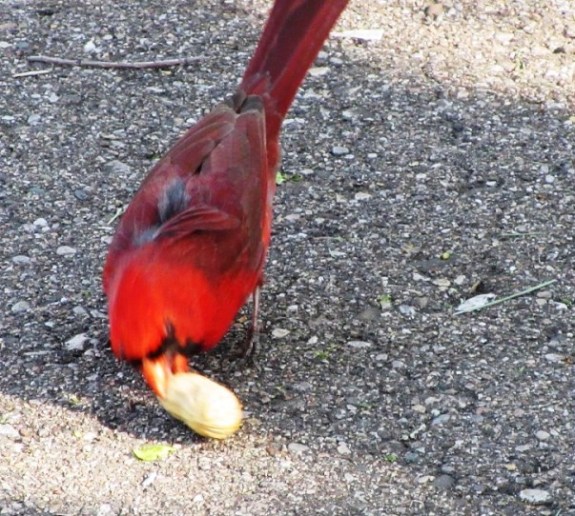 Today’s  jaunt got me to 301 miles walked so far in 2018, leaving me 750 more miles to go to reach this year’s goal.  Gulp!  I hope to fulfill this goal, but this weather has to cooperate better.   Mother Nature, help me out please!

This is my first blog and I enjoy writing each and every post immensely. I started a walking regimen in 2011 and decided to create a blog as a means of memorializing the people, places and things I see on my daily walks. I have always enjoyed people watching, and so my blog is peppered with folks I meet, or reflections of characters I have known through the years. Often something piques my interest, or evokes a pleasant memory from my memory bank, so this becomes a “slice o’ life” blog post that day. I respect and appreciate nature and my interaction with Mother Nature’s gifts is also a common theme. Sometimes the most-ordinary items become fodder for points to ponder over and touch upon. My career has been in the legal field and I have been a legal secretary for four decades, primarily working in downtown Detroit, and now working from my home. I graduated from Wayne State University with a degree in print journalism in 1978, though I’ve never worked in that field. I like to think this blog is the writer in me finally emerging!! Walking and writing have met and shaken hands and the creative juices are flowing once again in Walkin’, Writin’, Wit & Whimsy – hope you think so too. - Linda Schaub
View all posts by Linda Schaub →
This entry was posted in Uncategorized and tagged Spring, walk, walking. Bookmark the permalink.

35 Responses to Mother Nature is my nemesis sometimes …