No flurries, no worries …. 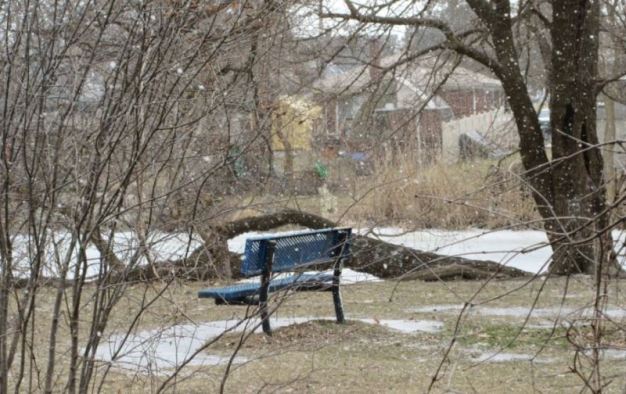 I was excited to head out this morning.  The moon and stars seemed to be in alignment … no snow, ice, bitter cold, freezing rain or wind to contend with … a win-win situation, or so it would seem.

I walked out the door and there were a few flurries alighting on my nose, then my coat sleeve.  I didn’t think much about those snowflakes, as all the weather forecasters said the next snow event would be Sunday afternoon.

I decided to walk to Council Point Park in case it was icy there, so I at least got two miles to and from the Park, and whatever else I could glean on the perimeter path feeding the squirrels.  Though it was clear as a bell, I still wore my lug-soled hiking boots – who knew what condition the path would be in?

By the time I arrived at the Park, the snowflakes were really twinkling down, so much so that I flipped my hood up.  That wasn’t good as it blocked my peripheral vision – how was I going to thwart any more squirrels crashing into each other in their zeal for peanuts?

I scurried under the pavilion and got the camera out, intending to only use it under the roof, that is, if I could lure the squirrels to see me in a spot where it was dry and snow-free.  It worked for a couple of my furry pals, who either took their peanut to the tree … 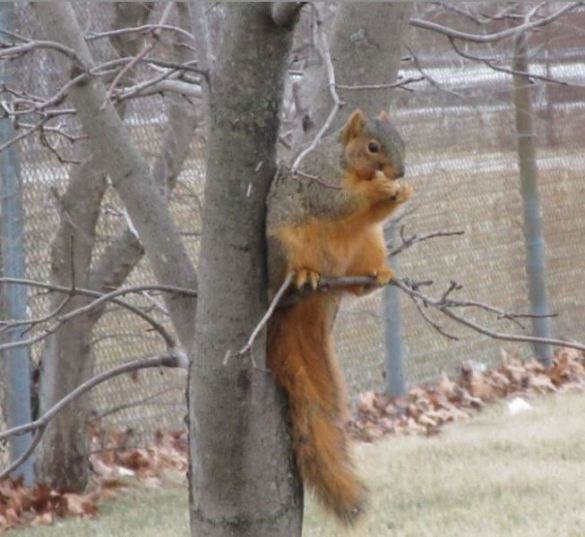 … or climbed to the picnic table, where you’ll note the lovely frozen Creek in the background. 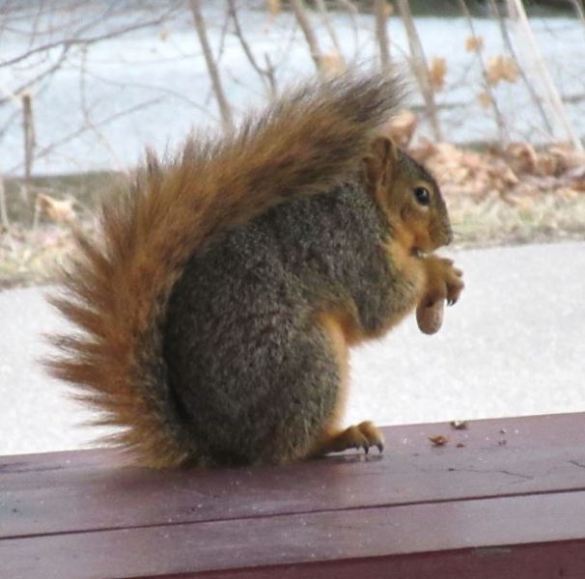 It stopped snowing, so I left the pavilion to dole out peanuts and make my apologies for my long absence to any squirrels who crossed my path. 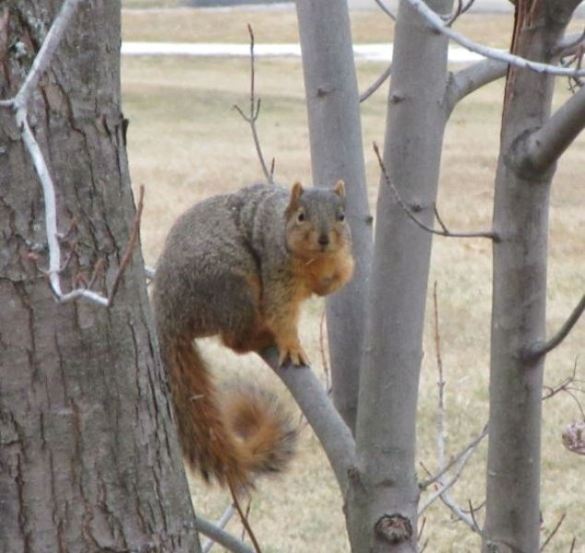 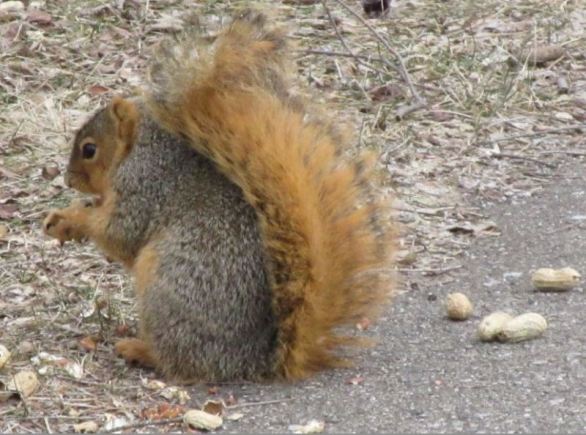 The Creek was frozen over in some spots, and solid ice in others.  Looking down through the bare branches I could see the frozen banks, yet water flowed freely down the center of the Creek. 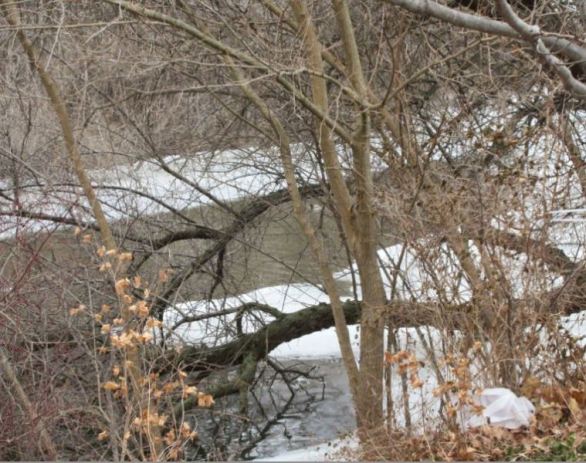 Around the bend, a wooden dock was solidly embedded in the ice. 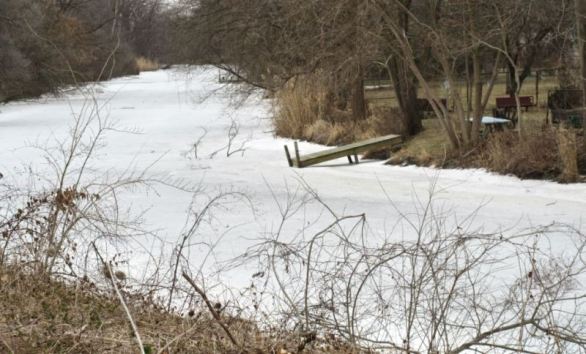 The geese were honking their heads off this morning.  I could hear them just as soon as I stepped onto the perimeter path.  But it wasn’t the usual “hey we’re coming in for a landing, so move away!”  I don’t know what the problem was, but they were arguing with one other and the voices and noises escalated and carried down the Creek’s narrow passageway.  Yes, you read that right.  When they are agitated with one another, their honking reaches a crescendo and the arguing parties all honk at the same time and sometimes doing a back-and-forth between one another.  It’s so loud you can’t hear yourself think.   I stepped over to the Creek banks and stood there watching them.

Since the bushes and trees are bare, it’s kind of hard to try to hide behind them so the geese don’t see me and paddle away, but this bunch was so engrossed in their honking, they were oblivious to me.

Every so often one goose would chase another one from behind, and its long neck would stretch out horizontally, aiming at its feathered backside and then stabbing it with its bill.  That incited a mini-riot wherein the targeted goose would rise out of the water and flap its wings. 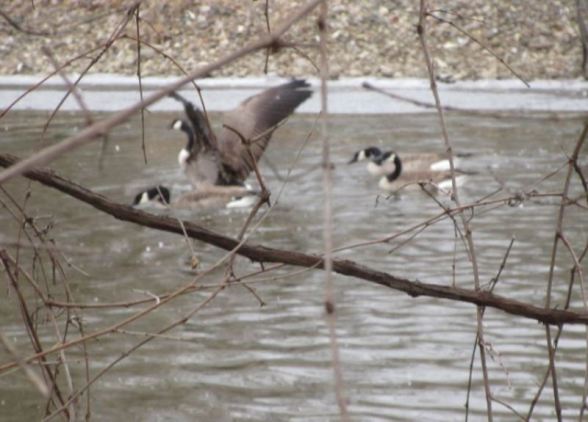 They were making such a commotion that the other geese stopped to watch. 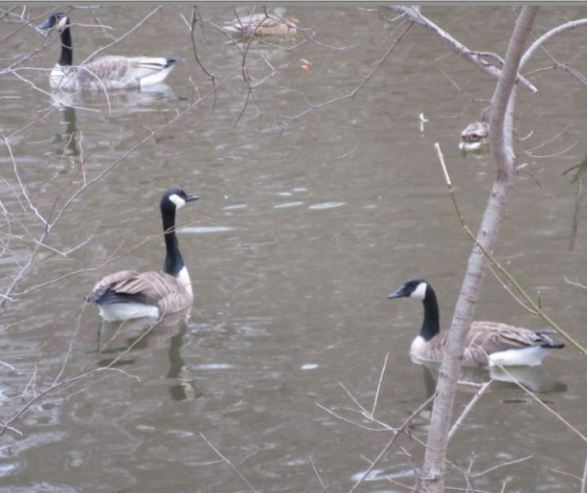 Even the ducks were in awe at this uncouth behavior. 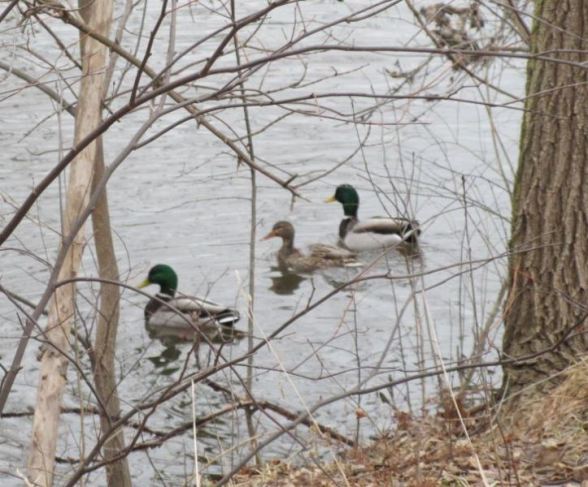 I made my way around the entire loop without so much as a twinkling snowflake, and then the snowflakes started up again.  The header photo shows the snow twinkling down on the bench.

As you know I’ve highlighted a few of the memorial trees in the Park and I have similarly written a post on a memorial tree planted for Erica Megan Sharick, who passed away at just 21 years old. 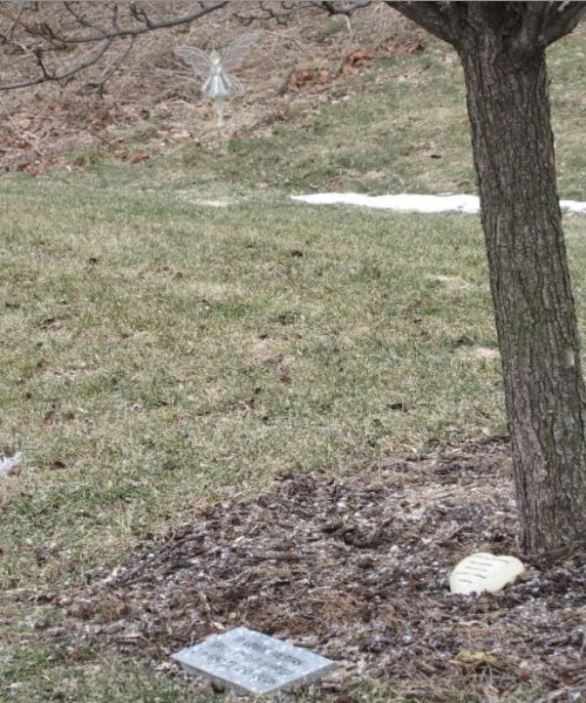 Today I noticed there was something new under Erica’s tree, no doubt placed there for the recent Valentine’s Day holiday. 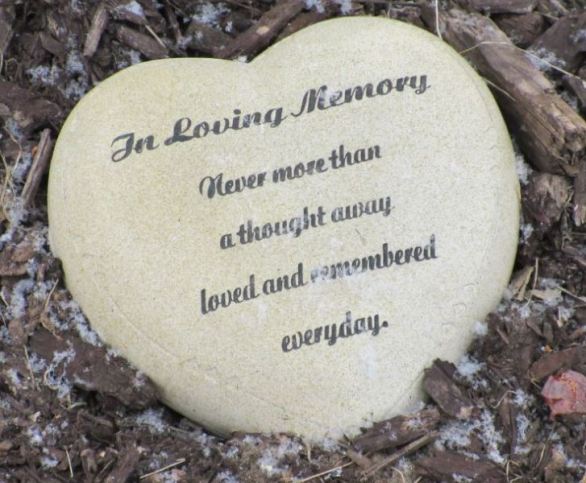 Snow was already starting to stick on the memorial stone. 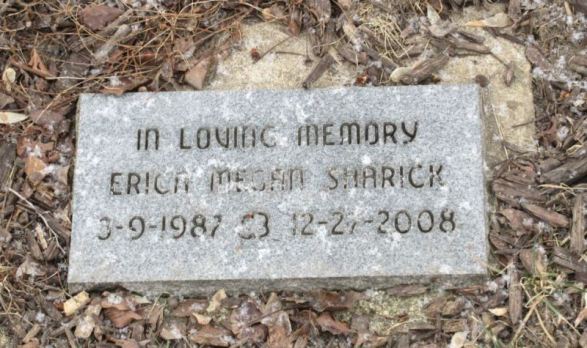 Just a hint of a breeze stirred the gossamer angel and it began to twirl around. 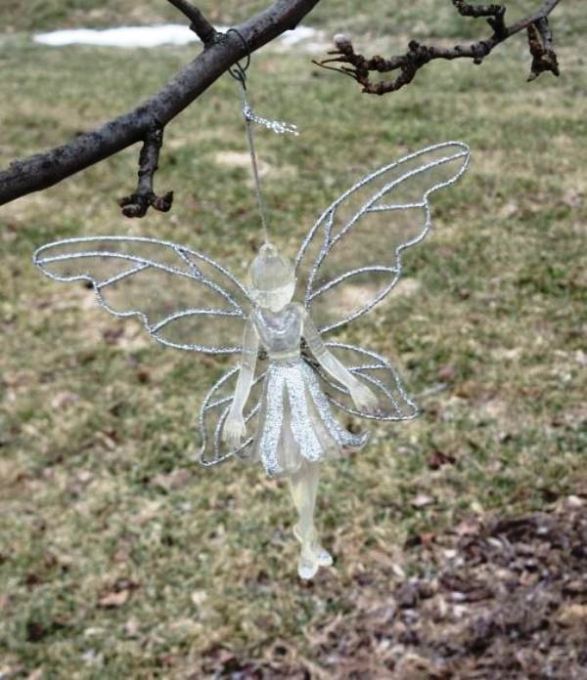 Fly high and sleep with the angels Erica.

The snow flurries picked up in intensity, blowing horizontally for a time and the massive flakes began to glom together making it slick on the path.  It sure is hard to get traction in my walking regimen if there is no traction on the paths that I must travel on foot.  I decided to cut my walk short and head home. 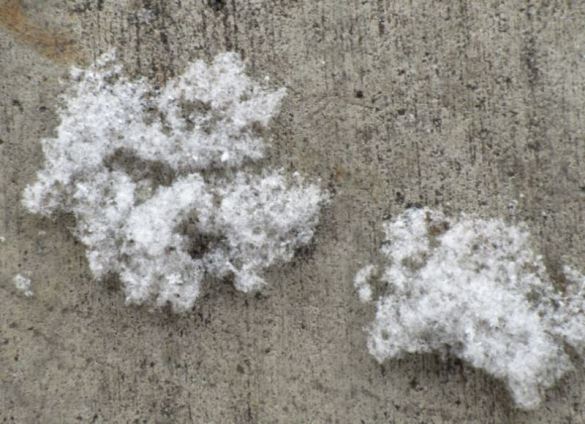 I put the camera away and with my head bent down, hurried to the pavilion area where I dumped out the rest of my peanuts on the picnic tables.  I noticed someone had left four painted rocks on four different tabletops.  I took photos of them, then when I got online, posted that I had found them on the “Downriver Rocks” Facebook site, a site where painted rock creators and collectors convene. 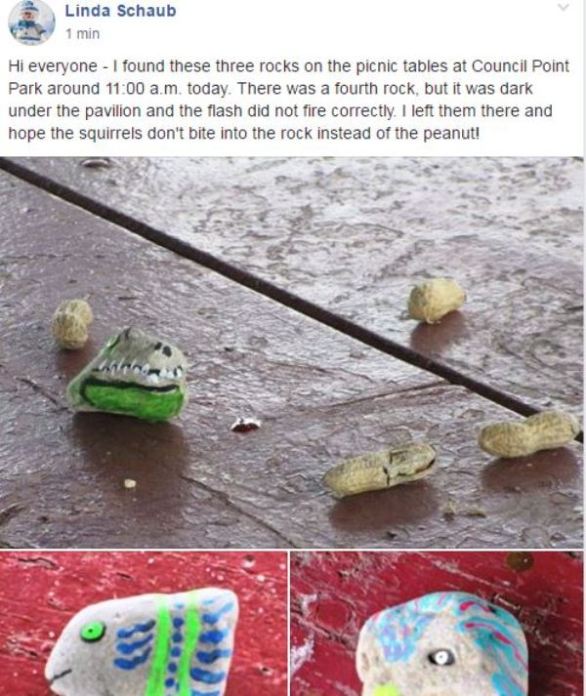 Walking home, the snow was swirling and collecting on the sidewalks and streets.  Despite wearing hiking boots, I slid a few times.  I paused under cover of a large fir tree to take a photo of the newly bare wood left by a branch that must’ve broken off during our recent windstorm. 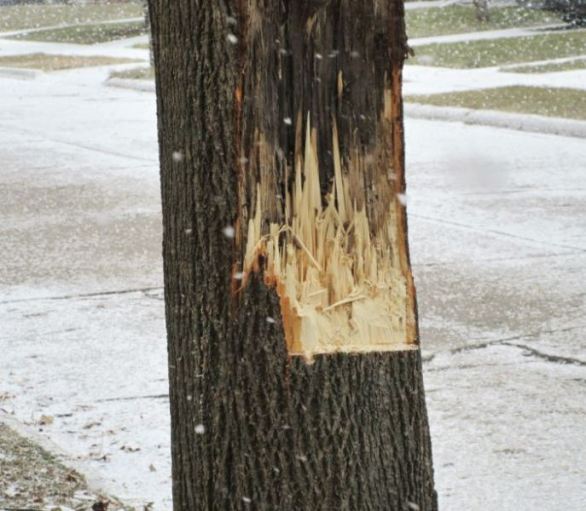 I also stopped to take pictures of these Snowdrops … the first new growth in 2018.  Well these flowers were aptly named as I noticed snow had settled down among the tender shoots. 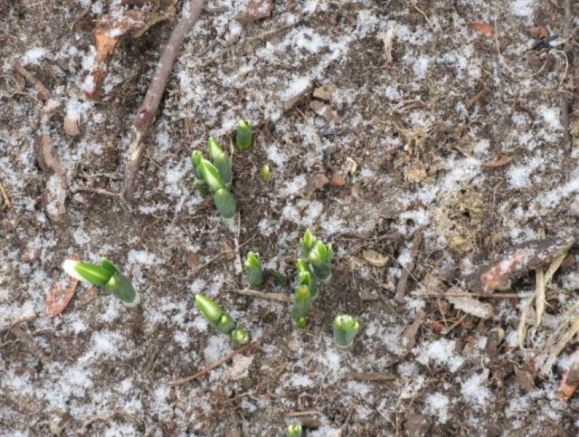 Seeing the Snowdrops, I wondered if Spring is all that far off?  “Bring on Spring soon” I muttered as I peeled off my snow-encrusted clothes.

This is my first blog and I enjoy writing each and every post immensely. I started a walking regimen in 2011 and decided to create a blog as a means of memorializing the people, places and things I see on my daily walks. I have always enjoyed people watching, and so my blog is peppered with folks I meet, or reflections of characters I have known through the years. Often something piques my interest, or evokes a pleasant memory from my memory bank, so this becomes a “slice o’ life” blog post that day. I respect and appreciate nature and my interaction with Mother Nature’s gifts is also a common theme. Sometimes the most-ordinary items become fodder for points to ponder over and touch upon. My career has been in the legal field and I have been a legal secretary for four decades, primarily working in downtown Detroit, and now working from my home. I graduated from Wayne State University with a degree in print journalism in 1978, though I’ve never worked in that field. I like to think this blog is the writer in me finally emerging!! Walking and writing have met and shaken hands and the creative juices are flowing once again in Walkin’, Writin’, Wit & Whimsy – hope you think so too. - Linda Schaub
View all posts by Linda Schaub →
This entry was posted in Uncategorized and tagged geese, nature, Park, Squirrels, walk, walking, Winter. Bookmark the permalink.

41 Responses to No flurries, no worries ….