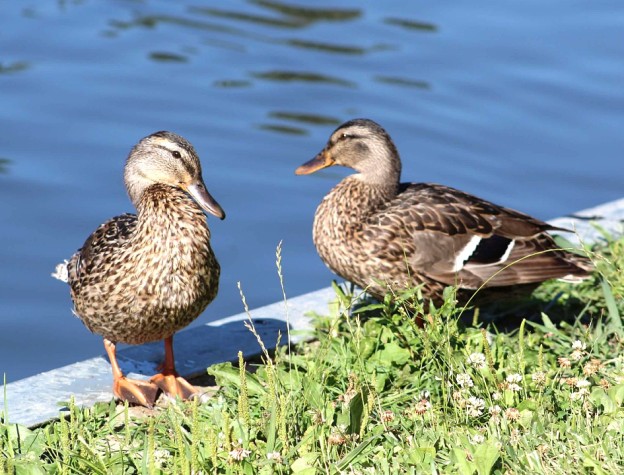 Today was an escape to beautiful and historic Heritage Park, a venue which never disappoints.  I figured I’d trek around the track twice, after visiting the old village area to feed the ducks and take photos before it got busy.

The weatherman kept crowing that today was the last day of our trifecta of cooler days so “get out and enjoy it!”  I liked the three-day respite, even though I really didn’t think it was all that cool today.  In fact, the car registered 80 degrees outside around noon when I arrived home.  Cool to me is 60 degrees … just sayin’.

The historical portion of Heritage Park sure is pretty and peaceful. 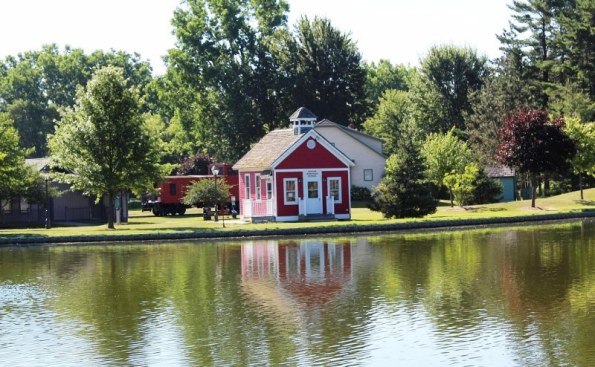 My first stop was Coan Lake to offload oyster crackers, treat the ducks and get a photo op … all in one fell swoop.

I was toting a new box of oyster crackers that I brought to feed the ducks (and the seagulls if the ducks were slow gobbling them up).  The last time I was here was for the 5K run/walk to benefit the local food pantry, and before that, I spent much of my time trying to get a few shots of the elusive barn swallows which were darting here, there and everywhere around the covered bridge.  Finally, you may recall, I discovered they had nests up in the rafters and each nest was filled with swallow chicks.  It was my lucky day that I looked up and saw the chicks and their parents!  (I confess I also was glad I looked up since there were multiple birds perched directly over my head just as I walked beneath them.)

As I neared Coan Lake, I broke open the oyster crackers to get ready to toss them to the ducks.  But what was this scene?  Another of the ducks’ benefactors had arrived just before me.  It seemed as if a feeding frenzy was already in progress, and that episode changed the course for today’s blog post.

I stood back and observed, camera in hand.

Just like the squirrels who come running over to greet me when I start walking on the perimeter path, ducks began to surround a gentleman, first paddling over to the water’s edge, then clambering onto land, or waddling over from the nearby grassy areas.  A few ducks even flew down from the sky.  There are many ducks at this Park, but they are usually scattered around the lake, never concentrated in one place.

I soon understood why this guy was a duck magnet.  He had a huge Ziploc bag of corn and was tossing it out onto the grass.

This was the scene I encountered just after I arrived.

After a few large handfuls of corn were scattered, the group began to multiply as more mallards joined the feeding frenzy.

By the time he was down to the bottom of the bag, the ground and nearby rocks were covered with ducks, their bills to the ground gulping down that corn.

I told this gentleman I might as well just hang onto my oyster crackers for next time.  He laughed and said the ducks know him.  He is there every morning because feeding the ducks just starts his day off right.  I told him I know all about that warm and fuzzy feeling and that is why I make my daily foray to Council Point Park and the occasional trips to other parks on weekends.  I, too, seek a nature fix and enjoy feeding my little buddies.

I said “so ducks like corn then – who knew?”  He said it was actually cracked corn, easy for ducks to eat and digest and it was a treat for them.  He said “if you leave your crackers and the seagulls don’t get ‘em, the ducks will have something to eat later when they get hungry.”

Based on this wisdom, I scattered the crackers on the lawn so my feathered friends could have a snack later.

Suddenly, he pointed to the wooden walk-out pier across Coan Lake …

… then told me the ducks are savvy, because in the afternoons people go on the walk-out pier with food, so naturally the ducks hang out over there after mid-day when there are more visitors at Heritage Park.

He also asked me if I noticed the ramp the Park installed in Coan Lake to make it easier for the ducks to get into the water.

I’d never noticed it before and told him this, adding “these ducks have a ducky life don’t they?”

We chatted about the weather, and ducks, nature in general, then back to ducks again, while we watched the mallards munching on their treats.  By then, the group had finished all the cracked corn and had moved on to the oyster crackers (so they didn’t snub me after all).

We watched the mallards going up and down the ramp, sometimes at breakneck speed … coming down, they kind of slide into the water with a big plop.

Some ducks skip the slide, and just dive in headfirst.

It cools them off, but annoys the other ducks with the big splash.  Me too – I jumped back in a flash so the camera didn’t get wet.

Of course, then their ritual is to shake and flip their feathers, much to the chagrin of the other nearby mallards.

Finally the treats were gone, so the ducks all headed into Coan Lake to cool off.  There were ducklings playing hide and go seek, turning upside down, tails in the air, momentarily disappearing, then popping up somewhere else while Mama Duck anxiously looked on. 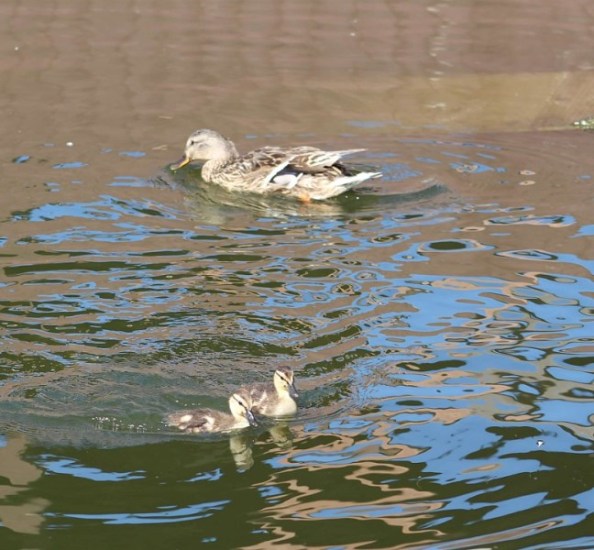 Meanwhile the temps were heating up quickly and I wished I could join those fine feathered friends in the cool water.  The fellow duck feeder and nature lover and I parted ways and I completed a spin around the village, then off to walk the pathway around the entire Heritage Park.

I got five miles of steps on the pedometer, and many miles of smiles as well.

This is my first blog and I enjoy writing each and every post immensely. I started a walking regimen in 2011 and decided to create a blog as a means of memorializing the people, places and things I see on my daily walks. I have always enjoyed people watching, and so my blog is peppered with folks I meet, or reflections of characters I have known through the years. Often something piques my interest, or evokes a pleasant memory from my memory bank, so this becomes a “slice o’ life” blog post that day. I respect and appreciate nature and my interaction with Mother Nature’s gifts is also a common theme. Sometimes the most-ordinary items become fodder for points to ponder over and touch upon. My career has been in the legal field and I have been a legal secretary for four decades, primarily working in downtown Detroit, and now working from my home. I graduated from Wayne State University with a degree in print journalism in 1978, though I’ve never worked in that field. I like to think this blog is the writer in me finally emerging!! Walking and writing have met and shaken hands and the creative juices are flowing once again in Walkin’, Writin’, Wit & Whimsy – hope you think so too. - Linda Schaub
View all posts by Linda Schaub →
This entry was posted in Uncategorized and tagged ducks, Mallards, nature, Summer, walk, walking, Water. Bookmark the permalink.

52 Responses to Oh … those lucky ducks.