Missed steps and a misstep? 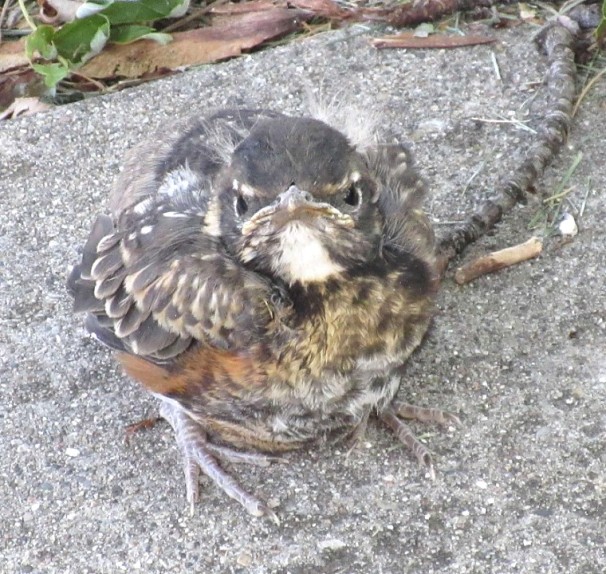 It was a beautiful and coolish morning, perfect for a walk, but my trek had to be cut short by an errand.  That errand was a trip to the eye doctor to pick up my glasses that had arrived almost two weeks ago, but their Robocaller had a hiccup, so I never got the message.  Finally I called on my own.  Anyway, I wanted to be there when their office opened, so I decided to get my steps in at nearby Memorial Park.  I walked enough laps around that Park to rack up almost three miles, not so impressive, but at least I got some steps in before heading home to get the car and drive to the eye doctor.

On my way home, however, near the end of my street, what I initially thought was a crumpled-up leaf, turned out to be a baby robin with its head under its wing and fast asleep.  This little guy was so small, especially with its head buried in its feathers.  I guess he sensed my presence because suddenly its head popped out from under a wing and he looked up at me.

I sure didn’t want to scare this robin chick and didn’t see any adult robins around.  I decided to take this little guy’s picture for today’s post.  I took my camera out of the case slowly, not wanting to make any sudden movements, but all the while talking softly to my little feathered friend.  In my most-soothing voice I said “sweetie, you really should have pulled over onto the grass to sleep because I might have stepped on you by accident!”

Well, he just looked up at me, a bewildered look on his face, and heart pounding a mile a minute.  I haven’t cropped this picture so you get an idea of his size. 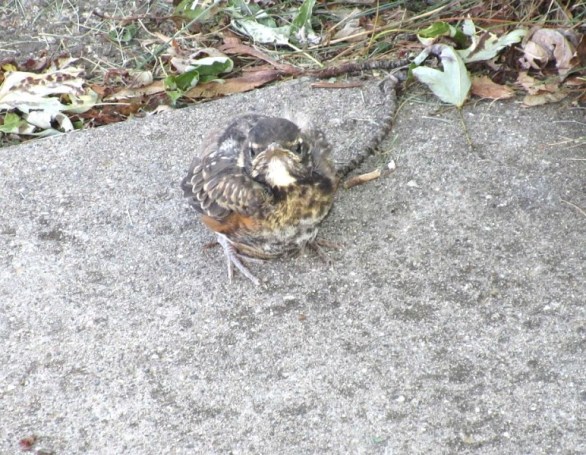 It might have been a coolish morning, but my heart melted a little when he continued looking up at me.  I zoomed in on him, taking a shot from the top and the side.  He tolerated my presence but still no parents came to his rescue, or to check me out, and that was worrisome to me.  A quick glance at the two nearby trees told me there were no nests that he might have tumbled out of – so where did this little fella come from?

I put away the camera, still cooing at this bundle of fluff, with the tufts on its head and speckled breast moving with each heartbeat.  Sadly, there was nothing I could do for him, yet I felt helpless just leaving him there on the sidewalk, shaking like a leaf.  I decided that Mother Nature, and his Mama, hopefully close by, would take care of him, so I left, but with some trepidation.

I went home, got the car and went to the eye doctor’s office.  I got there early and went to stand at the door to be first when they opened.  Then, I saw the sign “new office hours” … they are now closed on Wednesdays.  Great, just great.  Well that’s a first and I admit I was rather irked and stomped back to the car.

I decided my sudden “found time” would give me a chance to go back to Memorial Park and walk a few more laps.  I made a point to drive past the house where I saw the chick and saw Mama robin standing next to her baby.  I felt better witnessing this scenario.  While Mama robin is not a cat who can pick up her wayward kitten by the back of its neck and transport it to a safer place, she was still standing guard by her little one.   I put the car away and went back up the street to check them both out.

Mama Robin was hopping on the driveway, close enough to ensure I was not going to harm her chick, who surprisingly had moved about 15 feet from his original spot.  Even though Mama robin was nearby, so technically he was no waif, he still looked very small and scared.  I wanted to pick him up and wrap my hands around his trembling body, but I dared not.  He was a fledgling who likely make a misstep and tumbled out of the nest, or had a problem flying and lost his confidence.  He’d have fared better had his wings been bigger and his tail completely formed; you can see how short and stubby it is. 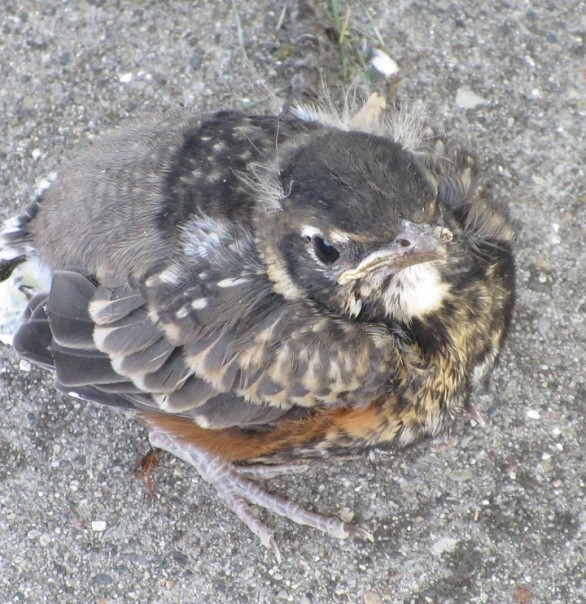 I decided not to go walk at Memorial Park and instead turned around and headed back home, leaving him and Mama robin behind, tears misting my eyes, knowing I would not come back this way again.  Not today.  Not tomorrow.  No,  I would not want to see his lifeless body on the sidewalk as Mama may not be able to protect him from all predators.

Suddenly my trivial frustrations seemed silly … it took this little chick to see the light though.

I hope he makes it safely back to the nest or a tree, away from danger, because it is a cruel world out there sometimes.

This is my first blog and I enjoy writing each and every post immensely. I started a walking regimen in 2011 and decided to create a blog as a means of memorializing the people, places and things I see on my daily walks. I have always enjoyed people watching, and so my blog is peppered with folks I meet, or reflections of characters I have known through the years. Often something piques my interest, or evokes a pleasant memory from my memory bank, so this becomes a “slice o’ life” blog post that day. I respect and appreciate nature and my interaction with Mother Nature’s gifts is also a common theme. Sometimes the most-ordinary items become fodder for points to ponder over and touch upon. My career has been in the legal field and I have been a legal secretary for four decades, primarily working in downtown Detroit, and now working from my home. I graduated from Wayne State University with a degree in print journalism in 1978, though I’ve never worked in that field. I like to think this blog is the writer in me finally emerging!! Walking and writing have met and shaken hands and the creative juices are flowing once again in Walkin’, Writin’, Wit & Whimsy – hope you think so too. - Linda Schaub
View all posts by Linda Schaub →
This entry was posted in Uncategorized and tagged nature, Robin, Summer, walk, walking. Bookmark the permalink.

53 Responses to Missed steps and a misstep?