What would we do without blooms and butterflies?

I hope we will never be without flowers or butterflies, though I will tell you that this Summer has been devoid of these delicate creatures hovering and flitting about.  I’ve seen a couple of Cabbage Whites and that is all.  It could be because it’s been such a gray Summer.  I rejoiced as not only was it clear, dry and cooler this weekend, but the sun was also out.

Today I planned to return to scenic Elizabeth Park, but then decided, since it was cooler, I’d visit my favorite nature nook and maximize my walking miles instead.  With the end of July in sight, this leaves me five months to walk almost five hundred miles – gulp.  Of course I must factor in November and December’s often-wintry weather into that equation.  I did well today – I walked nearly six miles, and, with yesterday’s total, I added ten miles to my tally this weekend.

Walking through the neighborhoods enroute to Council Point Park was quiet and peaceful.  No cars rolled down the street and all I heard was the songbirds twittering, the squirrels chattering and the rhythmic sound of my shoes as they hit the sidewalk while wending my way down to River Drive.  It was just 65 degrees, so most homeowners had opened their front doors and/or windows, to give the A/C a break and let the cool, fresh air circulate throughout their homes.  Occasionally, the smell of bacon frying or even toast, wafted through the still air, and I sniffed appreciatively as I walked along.

At the Park, there was a handful of walkers, and I started on the trail, only to be met with a trio of squirrels.  Well, just like old times!  I rounded the bend of the first loop to find a pair of my furry pals scurrying over to see me.  I was happy to indulge them in peanuts and noted it was all older squirrels, not a youngster in the pack.

I was pleased to see a young couple walking on the path with two children, while introducing them to Nature’s gifts.  The kids, probably about four or five years old respectively, were enjoying themselves as their parents (presumably) pointed out the turtles sunning themselves on a log, then they watched as some fish splashed in the water.  The kids giggled when a bullfrog made himself known in the background.  They watched me feeding the squirrels, so I had my back-up bag of peanuts and gave it to the kids and said “don’t hand feed them, just toss them out gently.”  Their parents thanked me and just then a squirrel came running over, and he noticed two different Ziploc bags – theirs and mine.  His head swiveled first to the little boy, then to me, so again I said “just throw some peanuts on the pathway and he’ll come to see you.”  The kids weren’t afraid in the least and there were a few squeals of laughter as the squirrel scurried off, clasping two peanuts between his front teeth.

I took no pictures at Council Point Park today, and Parker is still missing in action.  Ever since the rogue robin picked on Parker and that fracas of fur and feathers ensued, I’ve not seen my favorite peanut pal.  Hopefully he’ll turn up soon.

Today’s post continues yesterday’s trek.  Heritage Park has beautiful Coan Lake where the mallards’ reflections cause one to ooh and aah, and historical buildings, like the mill, little red schoolhouse, and even the covered bridge, take you way back in time.  This Park has a picnic area and a huge family reunion was taking place under one pavilion as I trekked by on the circular path.  It has a woodsy area where you can veer off and disappear from civilization in a heartbeat and you come out on the other side, feeling like you’ve vacationed deep in the woods of Michigan’s Upper Peninsula.

Heritage Park also has vast fields where soccer and baseball games are played; in fact, Heritage Park hosts the annual Junior League World Series next month, where teams arrive from all over the world to compete in Junior League baseball from August 11th through the 19th.

Tucked in the far corner of Heritage Park, next to the Petting Farm, is the Taylor Conservatory and Botanical Gardens. 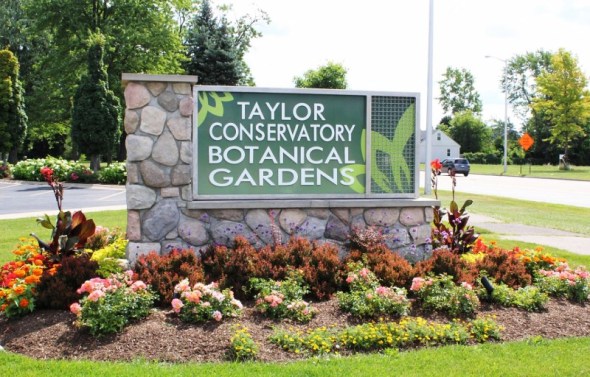 Its many flowers and plants are maintained by a local garden club and those beautiful specimens may be found in the domed Conservatory, the Terrace, Knot Gardens and the Grand Lawn areas.   In the Summer they have weekly music fests where people come by to enjoy the blooms and beats by local bands, as well as light fare which is catered in. 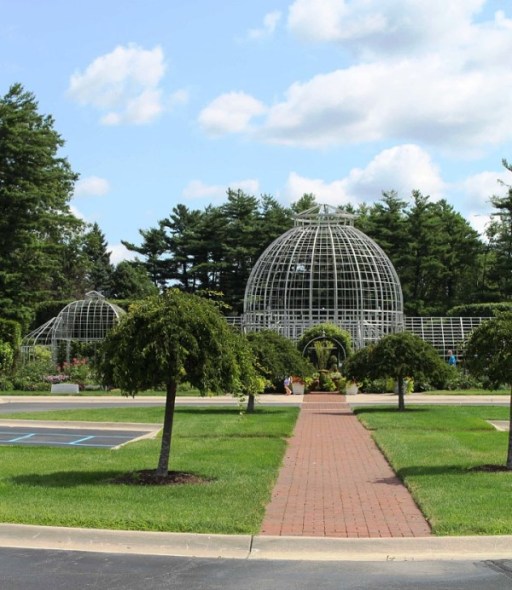 As I mentioned in yesterday’s post, in the many times I’ve been to Heritage Park, it is always on a weekend and there is usually a private event scheduled, so you can’t access the Conservatory and grounds, just the terrace area out front.

But,  I lucked out this time because I was able to walk in and enjoy all that this venue has to offer.  Toward the end of my stay, they were arranging for a private party and setting out chairs, so the timing of my visit was impeccable! 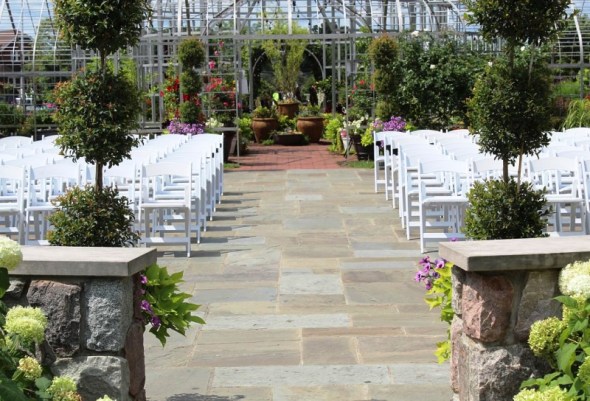 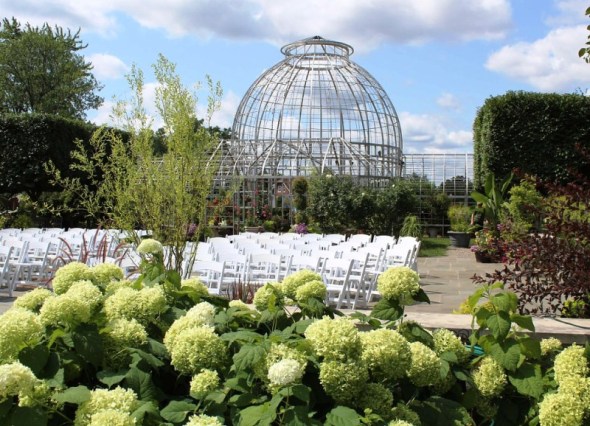 It was hard to choose which photos to use of my favorite blooms, as there were so many, but here is my pick of some of the beautiful flowers in the Conservatory. 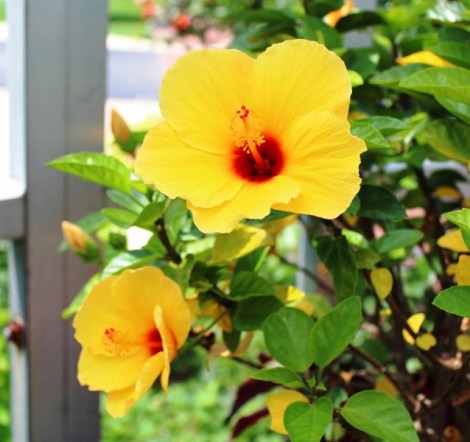 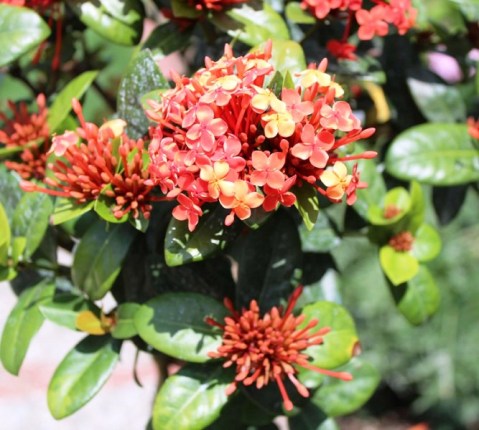 In the Conservatory, the floor consists of paver bricks inscribed with the names of donors and in memory of loved ones.

I liked this cacti dish garden too.

I had hoped the warm sun would bring out more butterflies, but I was lucky to see one Tiger Swallowtail that spent a lot of time in these purple flowers in the terrace area. 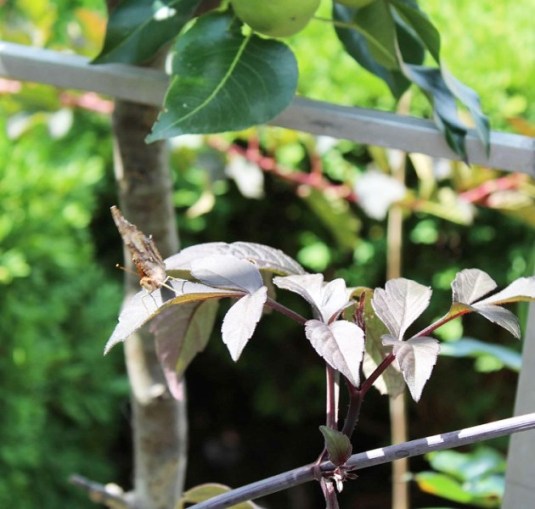 … and, just as I walked away it spread it wings to add a little more color to the plant.

Most of the flowers and plants had name tags on them.  These flowers are called “Bear’s Britches”:

Many flowers and plants I recognized like these “Snowballs”:

It was an enjoyable way to spend an hour and appreciate Mother Nature’s beauty, a stark contrast to the previous hour spent meandering around the barnyard and checking out the critters at the petting farm. 🙂

This is my first blog and I enjoy writing each and every post immensely. I started a walking regimen in 2011 and decided to create a blog as a means of memorializing the people, places and things I see on my daily walks. I have always enjoyed people watching, and so my blog is peppered with folks I meet, or reflections of characters I have known through the years. Often something piques my interest, or evokes a pleasant memory from my memory bank, so this becomes a “slice o’ life” blog post that day. I respect and appreciate nature and my interaction with Mother Nature’s gifts is also a common theme. Sometimes the most-ordinary items become fodder for points to ponder over and touch upon. My career has been in the legal field and I have been a legal secretary for four decades, primarily working in downtown Detroit, and now working from my home. I graduated from Wayne State University with a degree in print journalism in 1978, though I’ve never worked in that field. I like to think this blog is the writer in me finally emerging!! Walking and writing have met and shaken hands and the creative juices are flowing once again in Walkin’, Writin’, Wit & Whimsy – hope you think so too. - Linda Schaub
View all posts by Linda Schaub →
This entry was posted in Uncategorized and tagged Blooms, Butterflies, Flowers, nature, Summer, walk, walking. Bookmark the permalink.

54 Responses to What would we do without blooms and butterflies?