With some pep in my step, I explored the “naturehood” 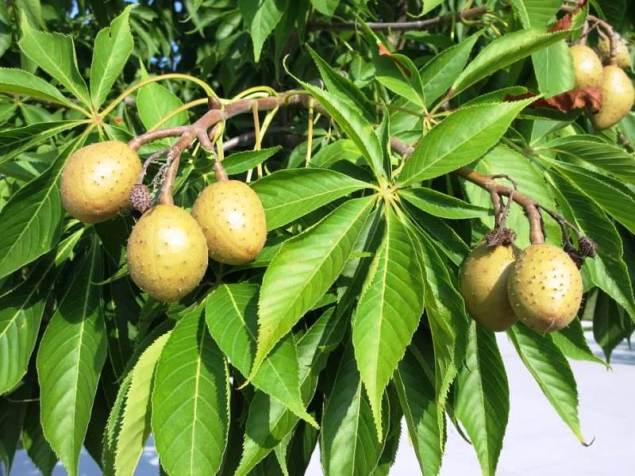 It was Day #2 of beautiful Fall-like weather.  I know I embarked on my walk with some added pep in my step once I encountered that refreshing air.  And today, for the first time in ages, the sun was shining brightly and I saw my shadow.  I aim to make the most of this brief respite from the heat and humidity.

I may have ended up at Council Point Park, my all-time favorite nature nook, but the neighborhood was also infused with nature, so I decided those winged, feathered or furry critters deserved a post all their own.

Here is what I discovered in the “naturehood” …

Before I even left the house, through the screen door I watched a huge bunny nibbling on the grass.  He didn’t hear the inside door open, so I was free to gaze at him.  There I was, just like a gunfighter reaching for his gun in the holster, as my left hand found the camera case and was unzipping it, ready to grab the camera to take its picture, but I decided I shouldn’t share with you how dirty the screen door was.  Suffice it to say, he was large and furry and nibbling on grass and, of course, right after I opened that screen door, he bolted, just a white flash of powder puff tail as he went to seek refuge somewhere else.

Even though it was a workday, school doesn’t start back up for another couple of weeks, so the neighborhoods were relatively quiet.  The A/C units weren’t humming for a change, as people had opened their windows and many screen doors were ushering in all the cool morning air.  Due to the still morn, I could hear the cicadas buzzing.  I’ve meant to remark on them for a couple of weeks now, but this morning, since it was extra quiet, their buzzing noises were especially loud.  I found one clinging to the door the other day and got its picture.  It’s hard to believe this bug will generate all that buzzing, but it does.  Summer is not just all about the heat and humidity – to me, nothing says Summer like the sound of cicadas.

As I turned the corner, I heard the unmistakable tweets of a cardinal.  As I whistled back, note for note, I searched for that beautiful red bird.  I finally found it, way high up on a telephone wire.

An airplane went overhead and the cardinal did a head tilt and looked up – yup, a bigger bird than you was flying the friendly skies.

I zoomed in on him while he was singing. 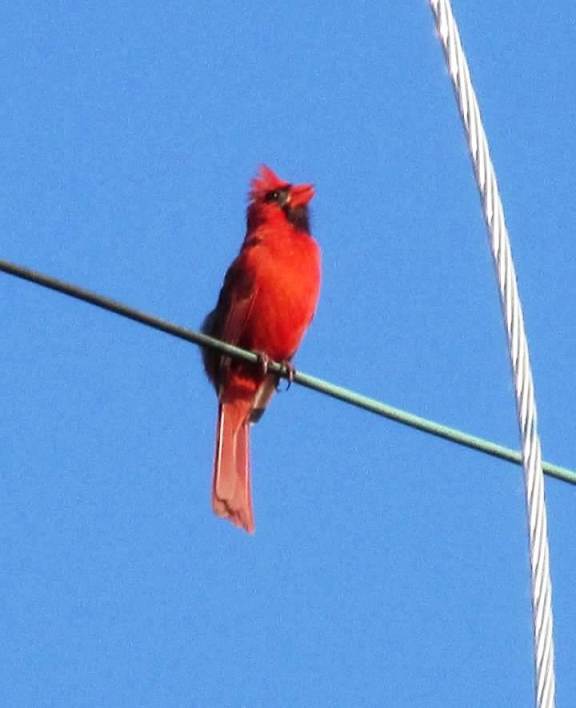 I heard that birdsong and kept whistling back all the way to the next cross street.

In the next block was a black squirrel chattering away from his perch on a low branch.  Usually black squirrels are more skittish than the fox squirrels.  I often try to entice them down from a tree branch by scattering a few peanuts, but they generally run the other way.  I couldn’t coax this one down to ground level either.

First, I took a photo of this squirrel fairly close up. 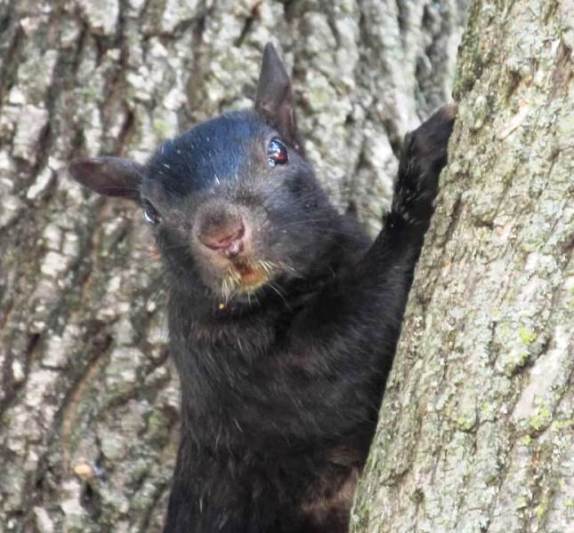 But then he gave me the side eye, and next raced up higher where I couldn’t reach him. 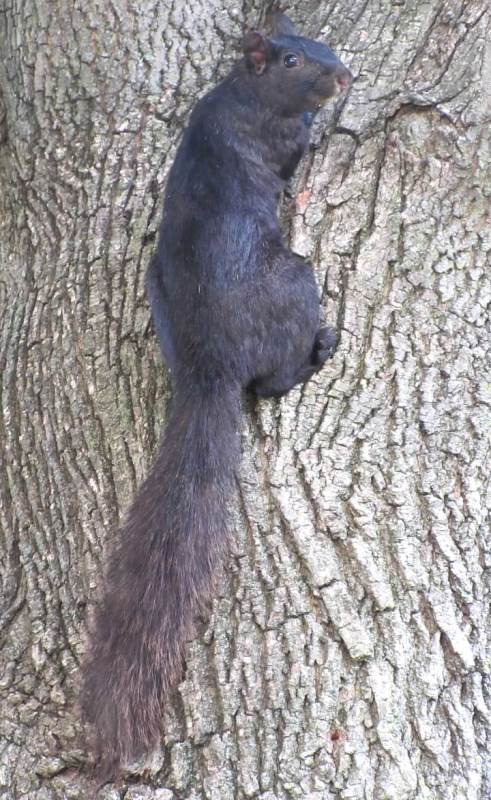 I thought this tall, bumpy and lumpy-looking tree was interesting. 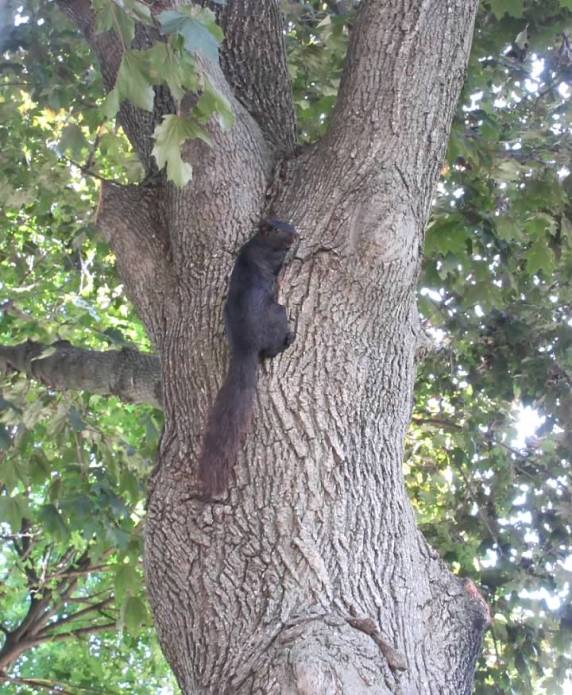 I tossed a few peanuts out onto the sidewalk, but no dice – he was up there to stay.

And speaking of trees, as I meandered along, I saw this tree that I used for today’s picture.  I know you were wondering why a tree merited being the featured photo, but I wondered what type of tree it was.  I did a reverse Google image search but found nothing.  The homeowner is never there when I pass and I am curious what tree bears this fruit?  [Note:  Fellow blogger Anne Mehrling has identified this as a horse chestnut tree.  How many years has it been since botany class???]

As I near Council Point Park, Pagel Avenue becomes a series of twists and turns.  A pair of bunnies was sitting on a homeowner’s lawn.  They looked like a couple of statues, not moving a muscle.  I think they had a spat since they were looking the opposite way.  They remained motionless as I took their picture, then one bolted, quickly followed by the other one.

A squirrel popped out of nowhere with a walnut in its mouth. 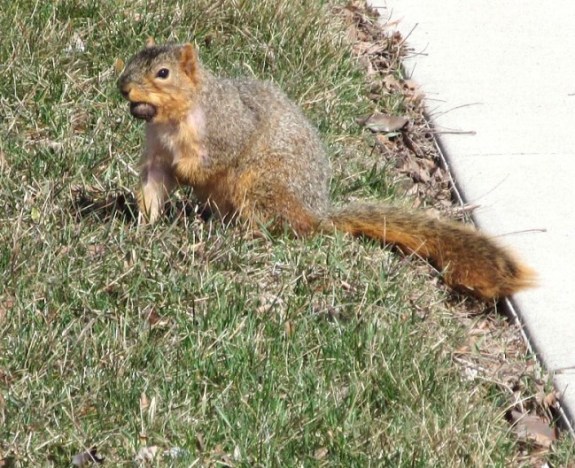 I wiggled my Ziploc bag filled with peanuts, but he had no interest, instead keeping his mouth wrapped around a huge muddy walnut.  To each his own I guess.

At Council Point Park, my furry pals were quick to show up for peanuts, and just as quick to scurry away and bury them, their front paws digging furiously into the grass.  Could it be the cooler weather has prompted them to step up their gathering and burying efforts?  Perhaps I should have let them in on a little secret … the heat and humidity will return on Saturday and should be here for a few more weeks, so there is plenty of time to squirrel away those peanuts.  Ugh to those muggies!

Nothing beats a nature jaunt in a real Park, but the urban forest was a treat today as well!

This is my first blog and I enjoy writing each and every post immensely. I started a walking regimen in 2011 and decided to create a blog as a means of memorializing the people, places and things I see on my daily walks. I have always enjoyed people watching, and so my blog is peppered with folks I meet, or reflections of characters I have known through the years. Often something piques my interest, or evokes a pleasant memory from my memory bank, so this becomes a “slice o’ life” blog post that day. I respect and appreciate nature and my interaction with Mother Nature’s gifts is also a common theme. Sometimes the most-ordinary items become fodder for points to ponder over and touch upon. My career has been in the legal field and I have been a legal secretary for four decades, primarily working in downtown Detroit, and now working from my home. I graduated from Wayne State University with a degree in print journalism in 1978, though I’ve never worked in that field. I like to think this blog is the writer in me finally emerging!! Walking and writing have met and shaken hands and the creative juices are flowing once again in Walkin’, Writin’, Wit & Whimsy – hope you think so too. - Linda Schaub
View all posts by Linda Schaub →
This entry was posted in Uncategorized and tagged nature, Summer, walk, walking. Bookmark the permalink.

66 Responses to With some pep in my step, I explored the “naturehood”