Well, I was ready to head out fairly early with three options for my morning meander.  I peeked out the door to see if it really was as cloudy as the weatherman said … yup, another gray and gloomy day.  At least no rain was predicted, but it was blustery and only 60 degrees.

I mentally ticked off today’s excursion possibilities:  the “Old Car Festival” at The Henry Ford, which I had planned to attend since I went to the Model A event last month.  It would be fun with all the vintage cars, old-time food and ragtime dancing in the street, all geared to mimic days of yesteryear.  Elizabeth Park and Heritage Park were also options, but with a gloomy and sunless sky, it would not be a stellar day for picture-taking at any venue.

All Summer, I’ve been hankering to go to “Saturdays in the Park” where six miles of Hines Park is closed to vehicular traffic.

I have lived in Michigan 52 years, yet I’ve never been to this popular park, which features a long trail that encompasses 15 miles over six cities.  For me, the closest way to access Hines Park was in Dearborn Heights, so this drive was about a 25-mile round trip for me.  Luckily I found a great place to park because they had already set up the blockades within the Park. 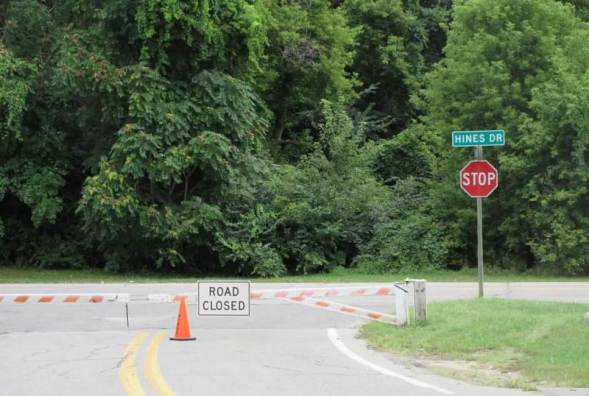 I began on a pathway that ran parallel to Hines Drive.  As I walked along I thought “well it could be a little bit warmer” and then I wanted to slap myself, after complaining about the heat and humidity all Summer.  But truly, that blustery wind was whipping around and the sunless sky made it feel like a late September/early October day.  Almost everyone was wearing hoodies with the hood flipped up.  Yikes!  I was in short-sleeves and shorts and probably could have layered up a tad more.

There were plenty of people enjoying full access to Hines Drive without fear of a vehicle running them down.  I saw walkers, joggers and even a contingent of teens who were rollerblading along the smooth pavement.  I must have seen 100 or more bicyclists, even a few on recumbent bikes. 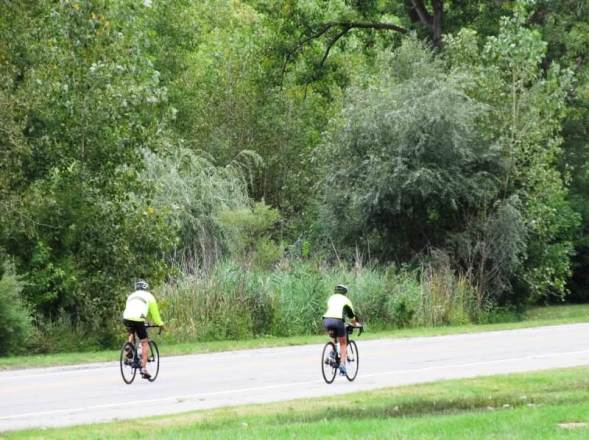 I meandered along, glancing here, there and everywhere for something interesting to include in today’s blog post.  The woods was rather dense in places. 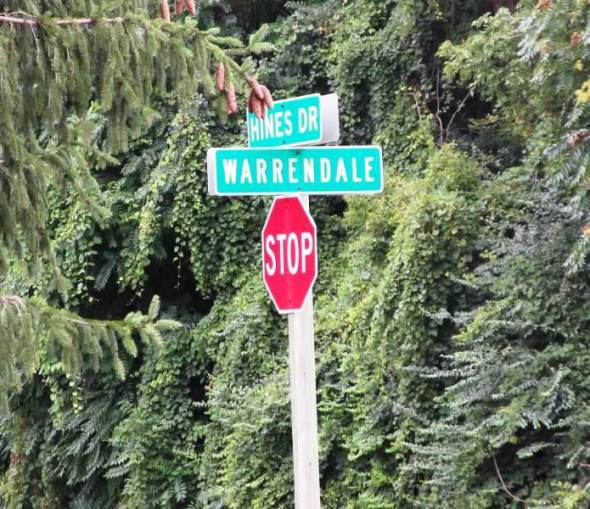 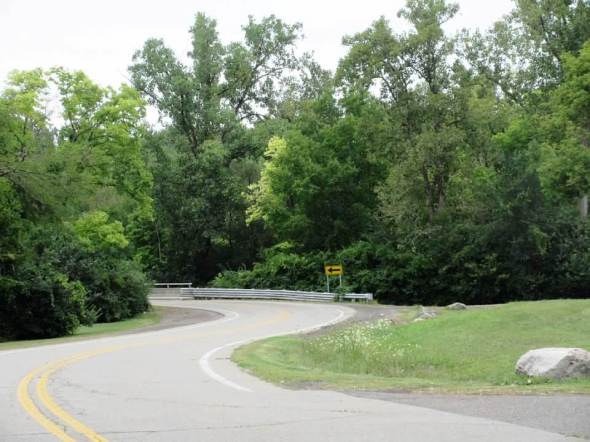 I heard some blue jays screeching noisily at one another and I was prepared to toss out a few peanuts for them, or to any squirrels, but no one paid me a visit.

There were a lot of trees down in this Park, but not the result of recent storms, and, in some cases, it didn’t appear they had been uprooted, but just toppled down and left there for effect – it didn’t look all bad, and the way they had rotted away was rather interesting as well.

Up close, some of this rotted wood made me wonder if a woodpecker or two had had a go at it, or it simply rotted away from the weather? 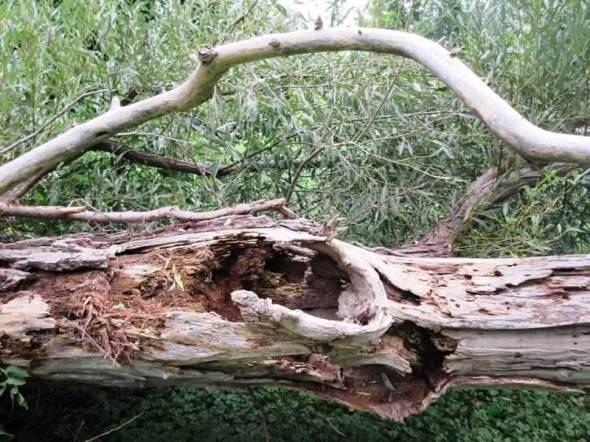 This fallen tree was so perfectly sliced, I wondered if someone cut it down and forget to haul it away?  I was trying to count its rings, but it was difficult to do so, because of the dark-colored edges.

I kept trying to catch a glimpse of the water between the trees and brush and I noticed even more fallen and submerged trees crisscrossing the water.  I walked about ½ mile further and saw a bridge where I could cross and get a bird’s eye view.  I thought the trees forming an arch across the water looked interesting.

If you look closely, you can see the water rippling in the breeze. 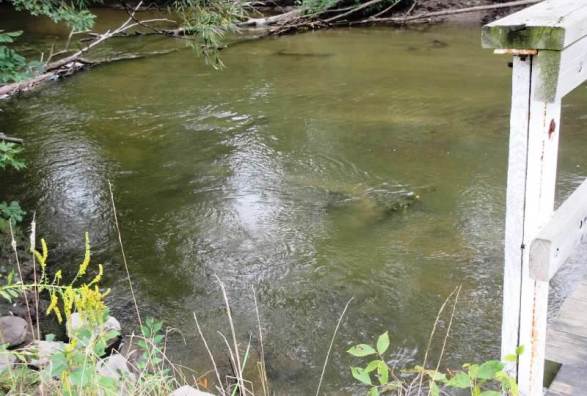 As you can see, this sign is a mileage marker, but someone added a little impromptu artwork to it … is this the twiggy equivalent of those cairns, or stacked rock piles, that you see along some hiking trails?

I saw many leaves down along the path, no doubt the result of that drought-like weather we had all of July, and the hot weather we’ve endured all Summer. 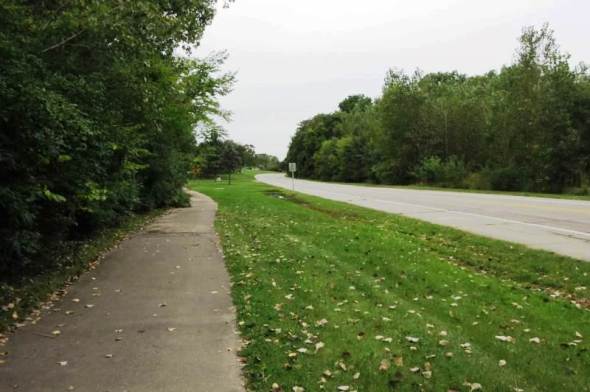 In my blog post headline, I mentioned “flora” … so, here you have it, probably the only colorful blooms I saw at Hines Park.  It was a huge group of Goldenrod which was covered with bees.  I had to be careful as there must’ve been a bee or two per bloom and I wanted a photo of them, but I didn’t want to bend over too close in case they buzzed up my shorts!

So that was the flora part of my trek; the fauna part … well, that was a whole other story.  My “Kodak Moment of the Day” was a pair of deer I saw near the bushes, across Hines Drive, and rather far from the trail I was walking along.  Knowing deer are more fleet of foot than me, I took their photo from across Hines Drive and hoped for the best.  They watched me and posed nicely, even gave me a profile view, then, with at least three decent shots under my belt … 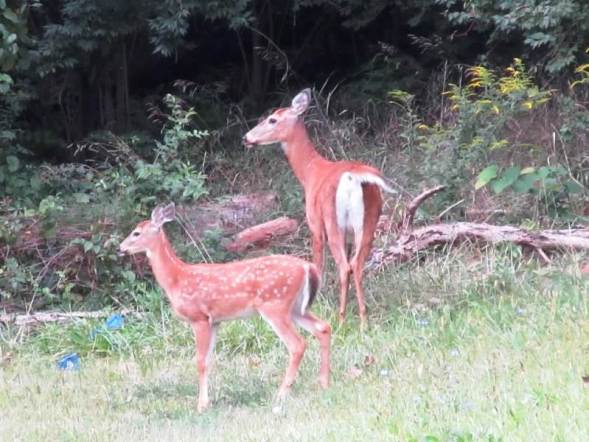 …  I decided to cross the street and get a closer look at them.

Well, you see how that worked out.

Oops!  This bicyclist not only photobombed my deer shot, but it spooked that doe and her fawn, and they leapt into the woods, flashing their white tails.  I walked over to the edge of the brush where they had been grazing but they had vamoosed in record time.

I stayed on the trail that ran parallel to Hines Drive until I reached 2½ miles on the pedometer, then I made the return trip to head back to the car.  I got a great cardio and legs workout as it was frequently hilly, so all that up-and-down trekking was good for me, since most of the trails I walk are flat.  You can see the steep incline in these photos below.

I stopped at Council Point Park before heading home  and added another 1½ miles to my total, by searching for hungry squirrels and checking on the status of the turtles.  Hungry squirrels I found – Parker was not around, but a few of the youngsters bravely came over to visit me.  The baby snapping turtles have not emerged yet … if they were smart, they would stay put until it warms up again next week.

So 6½ miles added to my walking tally, a deer sighting and I’ll sleep well tonight.

This is my first blog and I enjoy writing each and every post immensely. I started a walking regimen in 2011 and decided to create a blog as a means of memorializing the people, places and things I see on my daily walks. I have always enjoyed people watching, and so my blog is peppered with folks I meet, or reflections of characters I have known through the years. Often something piques my interest, or evokes a pleasant memory from my memory bank, so this becomes a “slice o’ life” blog post that day. I respect and appreciate nature and my interaction with Mother Nature’s gifts is also a common theme. Sometimes the most-ordinary items become fodder for points to ponder over and touch upon. My career has been in the legal field and I have been a legal secretary for four decades, primarily working in downtown Detroit, and now working from my home. I graduated from Wayne State University with a degree in print journalism in 1978, though I’ve never worked in that field. I like to think this blog is the writer in me finally emerging!! Walking and writing have met and shaken hands and the creative juices are flowing once again in Walkin’, Writin’, Wit & Whimsy – hope you think so too. - Linda Schaub
View all posts by Linda Schaub →
This entry was posted in Uncategorized and tagged Deer, nature, Summer, Trail, walk, walking. Bookmark the permalink.

60 Responses to Flora and Fawna.