Admittedly Parker is a squirrel, but there are some days when the moniker of “squirrelly” really fits him.

Today’s post features pictures I took of my favorite Park pal yesterday.  The sun was out in full force – what a great shadow day!  He and his brethren were all lined up along the perimeter path as I did my morning meander.  Today was rain-free, but a very gray day.

My worries about my little buddy following me out of the Park and into the neighborhood are not unfounded.  For three days in a row, he has found me both inside and outside of the Park.  While I am flattered that he loves me for myself, my cache of peanuts and/or the extra attention I pay to him, today he was just beyond squirrelly.

I’ve been pushing myself to get my daily five miles walked as we zoom through September – that means a round trip from home to the Park and three loops … two loops in the woodsy area where most of the critter activity is and one loop on the other side of the Park.

I saw Parker at the start of the pathway.  He hurried over. 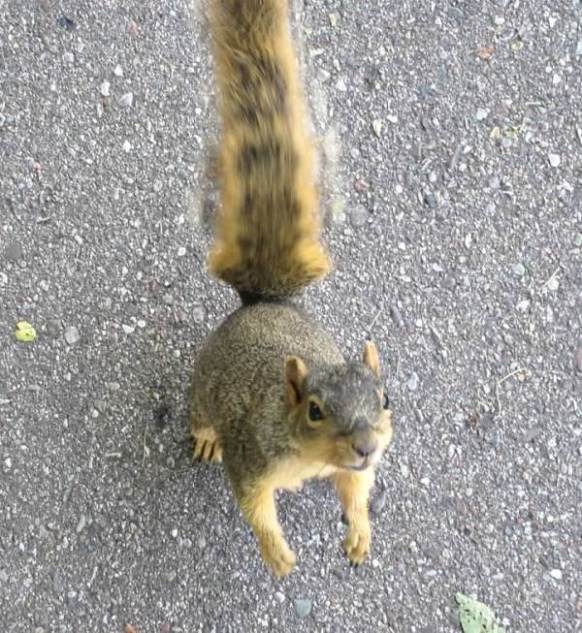 I tossed him a few peanuts to enjoy, knowing he’d likely catch up with me again.

The other squirrels wanted part of this action too.  Check out the fancy footwork … almost as fast as a racehorse coming down the track. 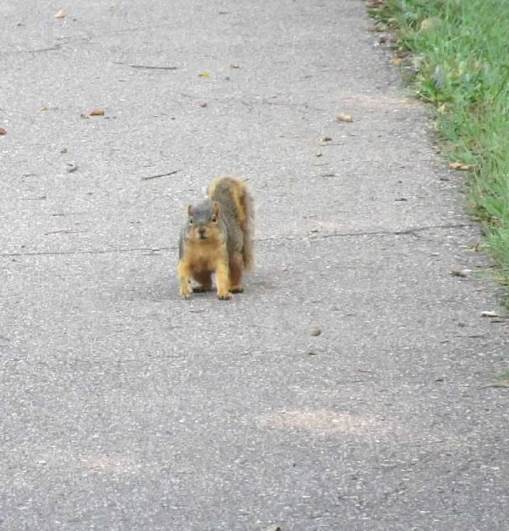 My goodies and me were being checked out at all angles.

Next, I headed to the second loop, on the other side, which is boring, but that’s where the turtle nest is.  (I’m sorry to say, that as of this morning, no hatchlings yet.)

I was ready to leave the perimeter path for home, when I stopped to chat with another walker as she approached her car.  I always look around for my little buddy before I leave the parking lot and cross the street to head home.  “Good” I thought, “no Parker, so no worries he’ll tag along at my heels behind me and go out into the busy street.”

However, not one minute later, a pickup truck rolled up to the stop sign and he waved me to go ahead.  I thanked him and then that driver rolled down the window and with a big smile on his face, he said “looks like someone followed you out of the Park!”  So, there was Parker, right at my heels, crossing River Drive with me.  I smiled and patted the Ziploc bag of peanuts I had clipped to the side of my fanny pack and called out “it will be his second treat today, so don’t let the sad eyes fool you!”

So, Parker and I went to “our rock” in the neighborhood across from the Park, so I could dole out more peanuts while he waited beside my feet.  Knowing his M.O., he’d grab one or two and streak back across the street to the Park to bury them, only this time, he climbed onto the rock that sits on the homeowner’s property.

I got the peanuts ready, he ran down, grabbed one, then scrambled back up the rock and turned his back on me to eat it.  Hmmm – not good manners. 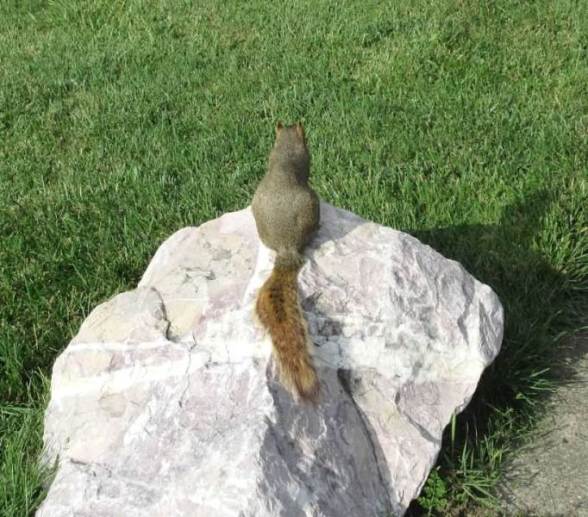 I went to leave, and he grabbed another peanut and beat it across the street. 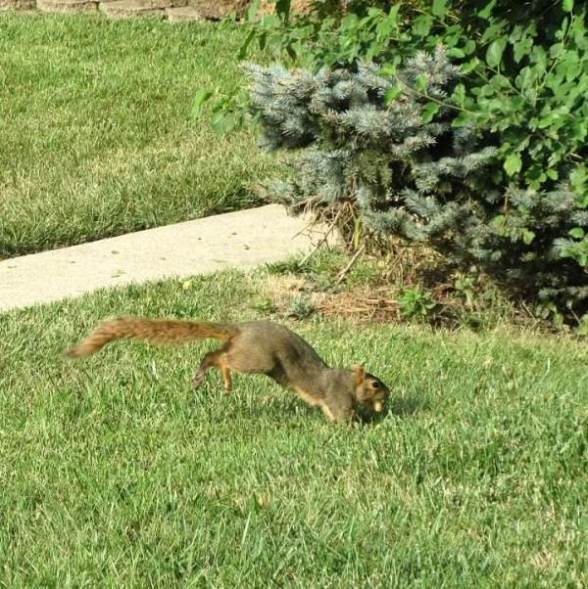 But, did he cross the street, like the proverbial chicken?  No, he ran to the middle of the street and parked himself there to eat a peanut.  I called out “are you crazy – get over to the other side!”  I had to run to the middle of the street myself and chase him to the grass in the Park.  He looked at me.   Was this a ploy for more peanuts?  Well, it worked.  The sucker that I am, handed over more peanuts, depositing them on the grass, and said “please stay put!”  I know he waited until I walked away, then hustled back to the rock and got the rest of them.

Tomorrow I will wear a disguise.

This is my first blog and I enjoy writing each and every post immensely. I started a walking regimen in 2011 and decided to create a blog as a means of memorializing the people, places and things I see on my daily walks. I have always enjoyed people watching, and so my blog is peppered with folks I meet, or reflections of characters I have known through the years. Often something piques my interest, or evokes a pleasant memory from my memory bank, so this becomes a “slice o’ life” blog post that day. I respect and appreciate nature and my interaction with Mother Nature’s gifts is also a common theme. Sometimes the most-ordinary items become fodder for points to ponder over and touch upon. My career has been in the legal field and I have been a legal secretary for four decades, primarily working in downtown Detroit, and now working from my home. I graduated from Wayne State University with a degree in print journalism in 1978, though I’ve never worked in that field. I like to think this blog is the writer in me finally emerging!! Walking and writing have met and shaken hands and the creative juices are flowing once again in Walkin’, Writin’, Wit & Whimsy – hope you think so too. - Linda Schaub
View all posts by Linda Schaub →
This entry was posted in Uncategorized and tagged nature, Squirrels, Summer, walk, walking. Bookmark the permalink.