The frost is on the pumpkin … 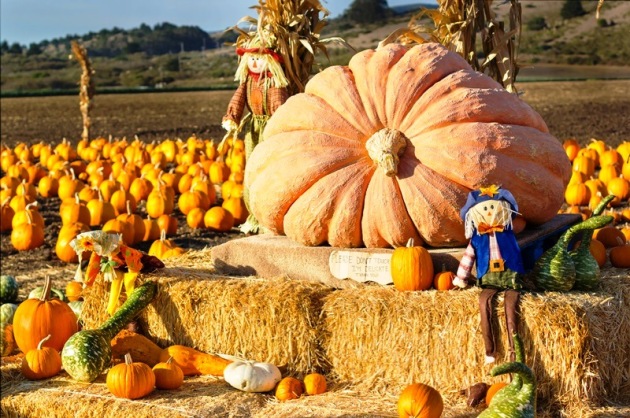 … and no, I’m not out of my gourd telling you that on the 18th of October!

We had a hard freeze in the wee hours of this morning.  Our weather folks had forewarned us that the blooms on our posies wouldn’t be perky after we dipped to the low 30s, and maybe even the 20s in the northern suburbs.  This is unusually cold for SE Michigan … after all, it’s only mid-October.  I’m not usually in the cedar closet digging out my woolen wear and Winter coat until late October/early November.  When I left the house this morning it was a mere 31 degrees.  I’m not into the whole Winter layers regimen yet and forgot a scarf and could have used one.  I hunched down into my coat collar and resembled a turtle as I wended my way down to the Park.  The lawns were covered with a light frosty glaze.  It looked like Mother Nature shook icing sugar on the grass and plants, and most of it was gone once the sun was high in the sky.

The squirrels were out, including Parker, who was running around the parking lot when I arrived, so I steered him toward the trail by making him follow at my heels until we were far enough away from any vehicles. 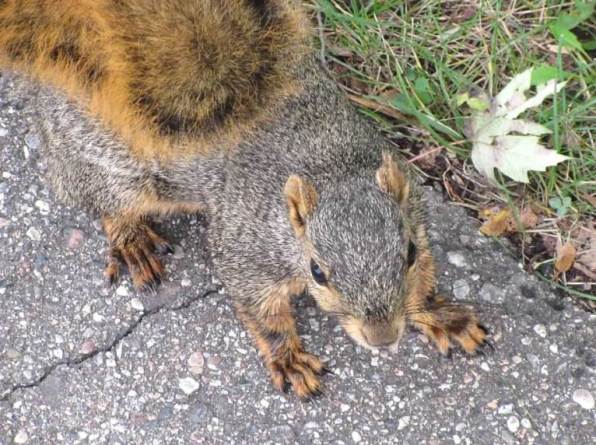 “Please don’t hang out in the parking lot – ever!” is what I told him, but of course it always falls on deaf ears. 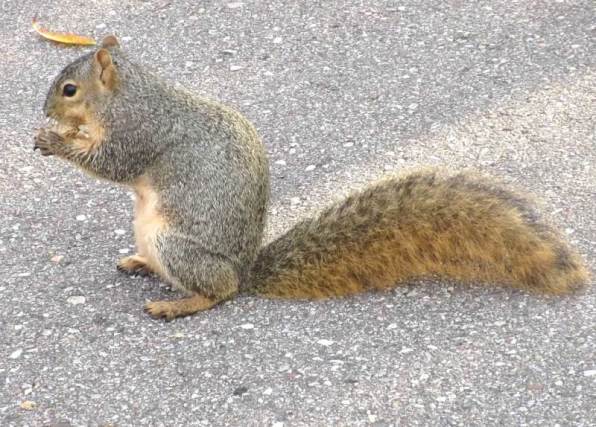 I finished up my walk, and there he was, in the parking lot again, so we repeated the exercise, and he got more peanuts from me.  Who can resist that sweet face? 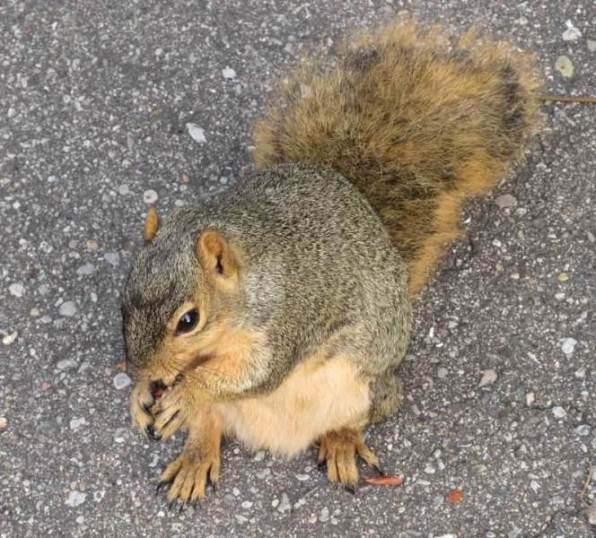 The leaves are not only littering the walking path, but the Creek surface as well, looking like multi-colored dots floating on by. 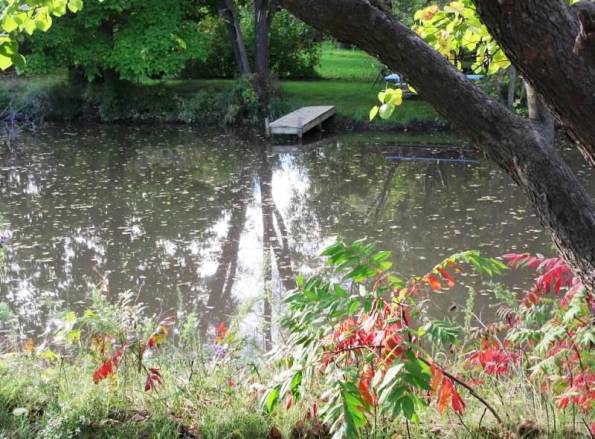 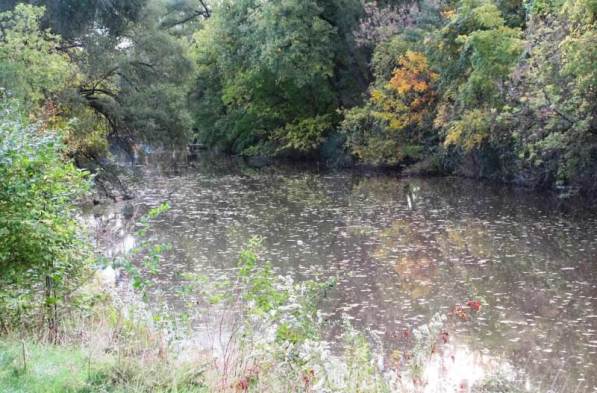 Some people have strapped festive Fall wreaths to the memorial trees in the Park, like this one. 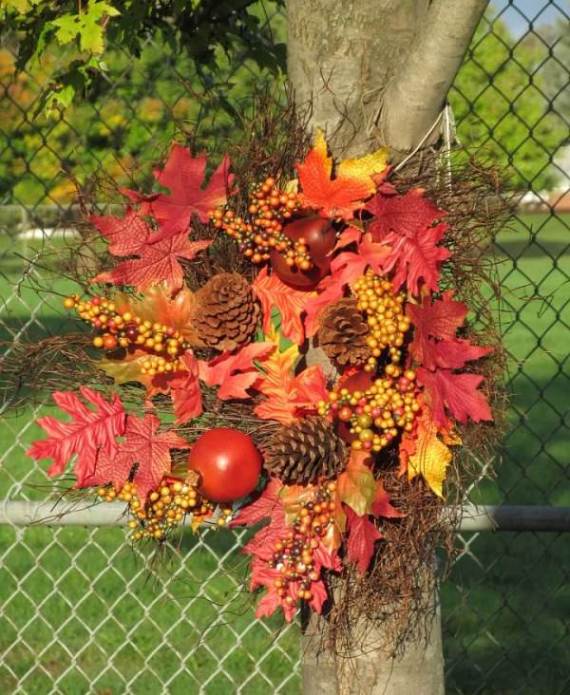 Yesterday I was a “two-timer” and proud to admit it.

I visited Council Point Park twice yesterday.  I slipped down there in the morning and then all afternoon I kept hearing about this big hard freeze advisory.  I turned off the outside water the day before, but got to feeling guilty about my hose, still on the reel, likely untouched since July when we had the drought.  We’ve had so much torrential rain that I didn’t need to water for months.

Now most people don’t have an affinity for their garden hose, but I bought this particular hose the first year I began gardening, around 1985.  The salesman at Johnny’s Nursery said “buy a Swan hose, they last forever ….”  Dominic was right.  So, I figured I’d better go out and put it away last night so it didn’t crack.  I had to pull the car out of the garage to put the hose in there.  So, I figured while I had the car out, I’d zip down to the Park for a quick walk.  So off I went for the second time in one day, thus I was a two-timer at the Park.

I’ve written before about going to Council Point Park in the evening.  It’s just not the same.  The angle of the sun is all wrong.  There are one or two walkers, sometimes none.  The biggest disappointment is the critters are never around.  I saw one squirrel and since I had peanuts with me, I shook the bag and he came scurrying over.  I’ll bet he was glad he didn’t go to bed early!

It’s always a little windy at the Park and yesterday the wind was racing at about 17 mph.  I had to hold onto my hat several times and since a few of my hats have gone airborne already, including a beret that whipped along in the wind and snagged on a branch over the Creek, I just called it quits after two miles and came home.

Then I had to deal with the hose, something I usually do when I’m raking leaves or doing other Fall outside chores.  I wrangled that cold and unbending rubber hose into two plastic tubs, a job that was akin to grabbing a python and winding it into a carrier.  I was grumbling the entire time.  Water stored in the hose from earlier in the Summer dribbled out onto my shoes and the hose snaked around a bit and got me all wet.  I was wondering why I didn’t do this last week when the hose was soft and pliable – after all, it was 86 degrees just a week ago.  Ahhh … because it was too hot – that’s why!

Reality has set in though … shorter days and scuffing through dead leaves.

The dramatic change in temperature may seem like the meteorologists were full of hops when they predicted an El Nino Winter, but I am buoyed by two more recent events telling us that Southeast Michigan may just remain unscathed from an abundance of snow and cold for the Winter of 2018-2019.

The first was seeing a post from Crosswinds Marsh Wetland Interpretive Preserve.  I’ve been following that site on Facebook along with other parks all Summer.  It was that site where I saw the post about the turtles hatching and reached out to Jennifer to ask about the turtle nest at the Park.  Yesterday Jennifer posted pictures of two Woolly Bear Caterpillars with this message below. 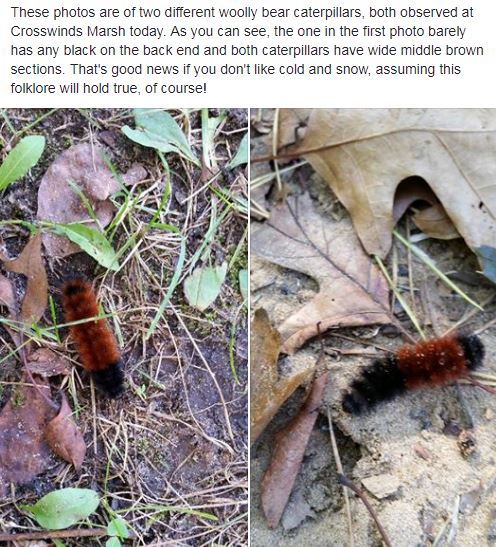 Today on WWJ, my radio station, they had the annual Winter prediction by NOAA (National Oceanic and Atmospheric Administration).  I look forward to hearing their annual predictions, just like the “Old Farmer’s Almanac” rep’s thoughts on the Winter season when he calls in.  Well, his words were that an El Nino is on the way with a milder and less snowy Winter for both the Upper and Lower Peninsula.

Yes, they don’t know for sure, and are making an educated guess, based on charts, algorithms and scientific data.  The caterpillar … well that’s Mother Nature’s doing I guess.  Let’s revisit this post 100 days from today, on January 26th, and see how it all shakes out and who was the most accurate, shall we?

In the meantime a girl can dream!

This is my first blog and I enjoy writing each and every post immensely. I started a walking regimen in 2011 and decided to create a blog as a means of memorializing the people, places and things I see on my daily walks. I have always enjoyed people watching, and so my blog is peppered with folks I meet, or reflections of characters I have known through the years. Often something piques my interest, or evokes a pleasant memory from my memory bank, so this becomes a “slice o’ life” blog post that day. I respect and appreciate nature and my interaction with Mother Nature’s gifts is also a common theme. Sometimes the most-ordinary items become fodder for points to ponder over and touch upon. My career has been in the legal field and I have been a legal secretary for four decades, primarily working in downtown Detroit, and now working from my home. I graduated from Wayne State University with a degree in print journalism in 1978, though I’ve never worked in that field. I like to think this blog is the writer in me finally emerging!! Walking and writing have met and shaken hands and the creative juices are flowing once again in Walkin’, Writin’, Wit & Whimsy – hope you think so too. - Linda Schaub
View all posts by Linda Schaub →
This entry was posted in Uncategorized and tagged Fall, nature, Predictions, Squirrels, walk, walking, Winter. Bookmark the permalink.

55 Responses to The frost is on the pumpkin …