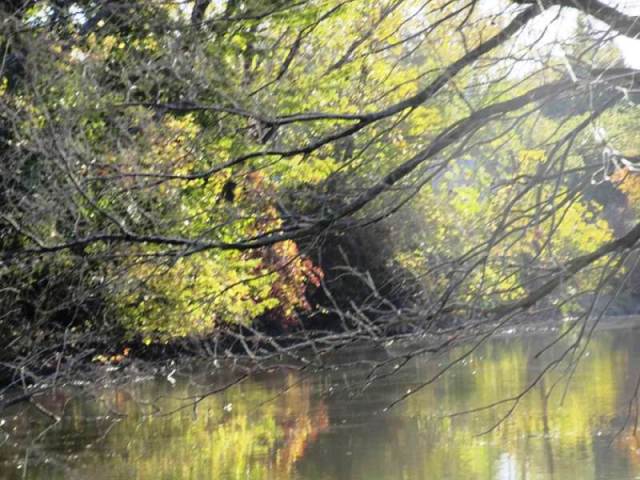 The roller-coaster temps and wacky weather continue to march on.  Yesterday it was sunny, but frosty; today was about as gray and gloomy as you could get, albeit some 15 degrees warmer than yesterday.  Quite honestly, I’d have preferred the sun to poke through the clouds, but that didn’t happen.   Rain is slated to arrive this evening and continue through the weekend – ugh!

Luckily, I took lots of photos at Council Point Park Wednesday and Thursday so I could share more of Michigan’s ever-changing color palette with you.

Talk about a BRRRRRisk walk!

Yesterday, we awoke to temps around 30 degrees and we’d had a hard freeze.  It was a brrrrrisk walk to be sure.  When I first arrived at the Park, it was so sunny, I was momentarily blinded and had to shield my eyes with a gloved hand for fear of tripping over, or stepping on, any squirrels who might circle around, or gather at my feet.  Large areas of the grounds were covered in frost, the blades of grass looking like stiff white bristles.  I stopped for a picture before I started on the trail.

No missed mist opportunities for me!

Almost immediately, the walker who told me about his coyote sighting the day before, rushed over and said he was glad he had found me. I’m not always an optimist and immediately thought the worst … was the coyote still roaming about the Park, or, worse … had that coyote hurt or killed any of the squirrels?  I was almost afraid to ask what was up.  He told me the mist was rising on the Creek and the mallards were in that mist swimming around, so he knew “The Camera Lady” would probably like to take a picture.  I thanked him and said I’d hurry right over there.  Whew!  I had to smile because I already have the moniker of “The Peanut Lady” so I guess I have a new alternate name.

Now, I must admit I’m a creature of habit.  I always start on the perimeter path on the first loop, right-hand side, each and every time I walk at Council Point Park.  Evidently those savvy squirrels know my walking habits as well.  They likely already saw me start, then abandon, my regular route.  Those squirrels are no slouches because they decided to join me.  Soon there was a passel of peanut pals following me as I cut across the frozen grass, my heavy walking shoes leaving indentations on the frosty blades, as I hustled to get to the opposite side of the loop.  Just as I arrived at the cement precipice where the heron scopes out his breakfast, I could see the mist swirling and hovering over the Ecorse Creek.  I pulled out the camera and took a few shots in case the mist dissipated quickly.

Meanwhile, out of the corner of my eye, at least a half-dozen squirrels had gathered around me, circling closer, and impatiently waiting for peanuts to be handed out.

I finished my shots, plus another of the frost on the grass while I fed them. 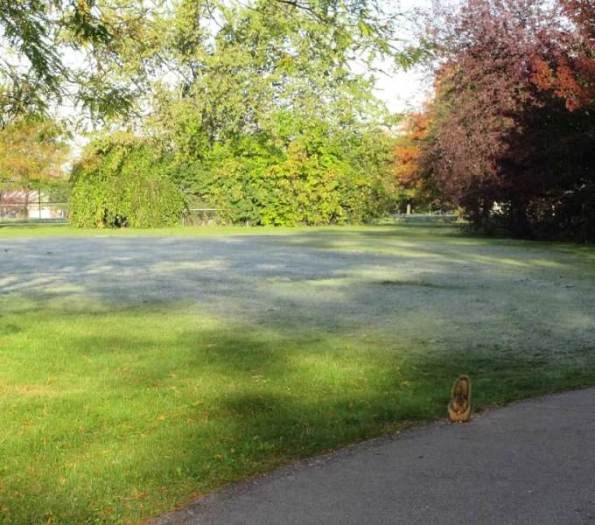 The Park’s color palette has been changing this week.

Those beautiful trees and bushes I recently spotlighted, that were ablaze in rich shades of red, burnt orange and golden yellow, have now dropped their leaves.  A few more trees have begun their transition with the maple trees giving the prettiest show of colors.

This maple tree must be diseased as it has these ugly spots on it, but it still managed to turn a vibrant shade of red as you see in the frost-tinged, spotted leaf below.

Lots of green leaves still remain, but these Autumn color tones sure are pleasing to the eye. 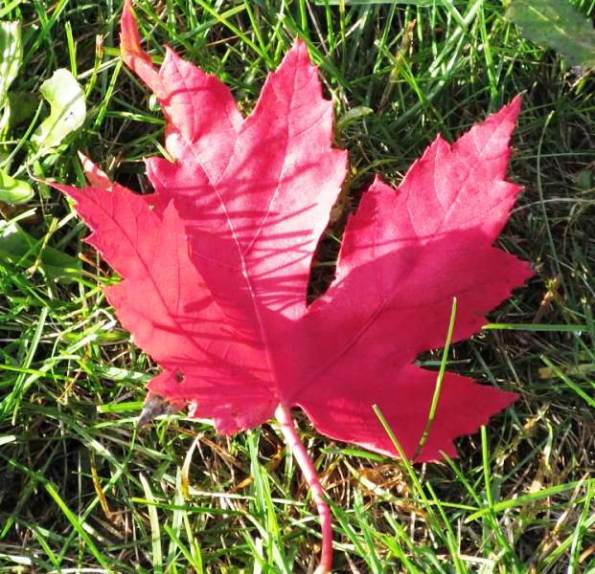 … as do these brilliantly colored berries.

I wonder what type of berries they are?  They’re shiny and look soft and squishy.

I researched a little, but can’t identify them.  These bushes are scattered around the Park and I’ve never seen any critters feeding on them, unlike the mulberry trees where the squirrels, birds and even the groundhog, have a go at those berries during the Summertime.

Some delicate purple flowers, the hangers-on that didn’t die off from that hard freeze,  rise above the Creek bank to lend a pastel tone to the landscape.

In the second walking loop, the part of the figure eight perimeter path that is not so colorful, nor critter filled, I noted that the trees are starting to turn and I’ll try capturing their vivid hues again next week, but, in case tomorrow’s stormy weather makes the leaves wriggle free and land on the ground, I took these pictures. 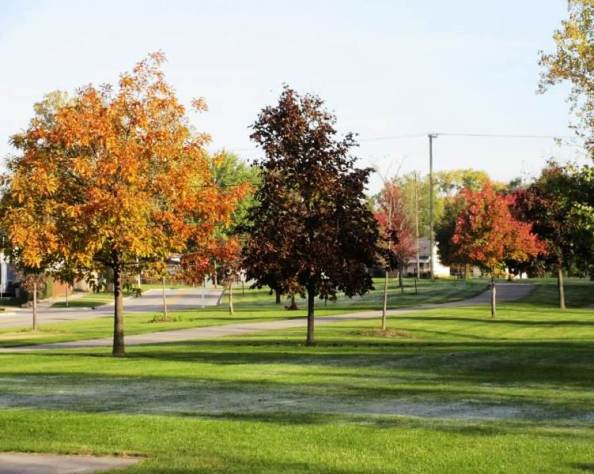 By the second time around, the mist had started to lift and in this portion of the Creek, I got a better view of the mallards, as they swam on what looked like a golden pond from the reflection of the trees onto the water. 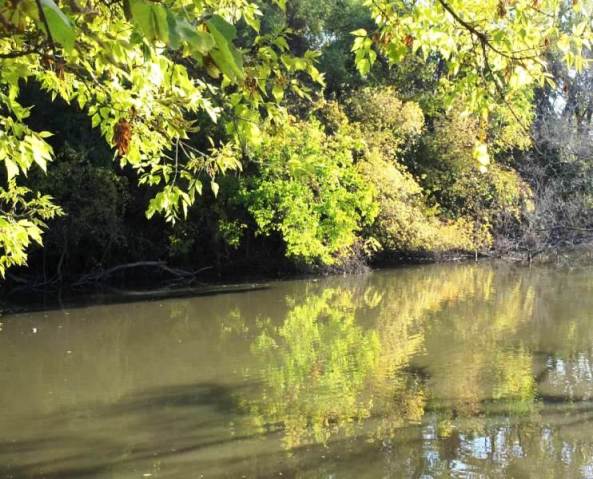 There was a new and unexpected addition to the Park. 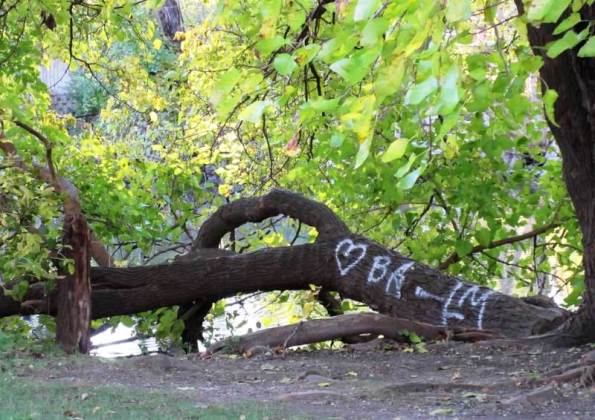 Sadly, as you can see my favorite nature nook has begun transcending into Winter. Soon the trees will have no cloak of colors, whether it is green or a kaleidoscope of hues, but instead they will be bare and stark looking in contrast to the snow.  I am reminded that once the snow and ice arrive, my daily walk will sometimes become a trudge, if it happens at all.  But for now, the journey was joyous and my trek was tranquil.

This is my first blog and I enjoy writing each and every post immensely. I started a walking regimen in 2011 and decided to create a blog as a means of memorializing the people, places and things I see on my daily walks. I have always enjoyed people watching, and so my blog is peppered with folks I meet, or reflections of characters I have known through the years. Often something piques my interest, or evokes a pleasant memory from my memory bank, so this becomes a “slice o’ life” blog post that day. I respect and appreciate nature and my interaction with Mother Nature’s gifts is also a common theme. Sometimes the most-ordinary items become fodder for points to ponder over and touch upon. My career has been in the legal field and I have been a legal secretary for four decades, primarily working in downtown Detroit, and now working from my home. I graduated from Wayne State University with a degree in print journalism in 1978, though I’ve never worked in that field. I like to think this blog is the writer in me finally emerging!! Walking and writing have met and shaken hands and the creative juices are flowing once again in Walkin’, Writin’, Wit & Whimsy – hope you think so too. - Linda Schaub
View all posts by Linda Schaub →
This entry was posted in Uncategorized and tagged Autumn, Fall, Frost, Leaves, Mist, nature, walk, walking. Bookmark the permalink.

38 Responses to Color my world.