I’m sure last weekend was the primo time for viewing the Fall foliage here in my neck of the woods, but it was a rainy and dismal-looking pair of days.  This morning I decided I had best get going to view peak colors before tomorrow’s blustery winds and Tuesday’s gusty Election Day storm strips all the leaves from the trees in one fell swoop.

I had originally intended to drive out to Lake Erie Metropark this morning, but my boss has a friend who was involved in a deer/vehicle crash earlier this week and it left me wary.  This guy and his wife were returning from their northern Michigan cabin, when a deer plowed into their vehicle and it was totaled. Luckily they escaped unscathed.  Lake Erie Metropark is out in the sticks and I’ve seen deer crossing the road within the Park earlier this year, so I’ll hold off until deer mating season winds down a bit.

The weatherman said today was the better pick of our weekend days, with sun in abundance, so I pushed a few errands and outside chores over to Sunday based on his advice.

My alternate destination was beautiful Elizabeth Park to check out the Fall colors.  With the abundance of trees at this venue, I figured they’d surely be sporting their Fall foliage finery by now.

But first … I had to make a pit stop.

I packed up some peanuts (of course) and had my whistle and pepper spray handy.  Off I went in the car.  This week I was not going to run out of peanuts and be concerned about running over one of my furry friends, and, I figured if I saw a coyote, I was prepared and had a safe haven in the car.

I wanted to stop at Council Point Park and feed the squirrels before I headed to Elizabeth Park.  The squirrels forage mostly in the morning and other times when I’ve stopped to feed them after visiting other parks on the weekend, they are nowhere to be found.

Because I’m prudent (as well as petrified I’ll come nose-to-nose with a coyote), I took my pepper spray canister off my lanyard and shoved it into my pocket.  Likewise, I took the can of pepper gel out of its holster on my fanny pack.  Those two safeguards work well in the warmer months, but with a coat over top of the fanny pack, I’d be fumbling around, so why take a chance?  I had all my bases covered, so as I crossed the parking lot I wondered what I thought?  From what I’ve read, coyotes steer clear of humans.  So was a coyote going to come after me with ears laid back and teeth bared?  Better to have an overactive imagination than be complacent.  Besides one is injured and I figured those coyotes had three rainy days with Council Point Park all to themselves and might not appreciate a human intrusion this morning.

I parked the car at the far corner of the lot and right away a trio of squirrels came running over to visit.  I herded them away from the parking spaces and past the curbs to feed them.  I decided I’d walk one loop only and feed my little buddies, then get on my way.  I chitchatted with some of the other walkers and took some more photos of the Fall foliage.

And now, ONE last thing …

In reviewing the photos from Council Point Park, I realized there was one thing from each photo that stood out for me:

In the header photo, you see one memorial tree festooned with silk Autumn leaves wrapped around its trunk; there is also a memorial wreath attached to the tree.

The golden tree that hangs over the Ecorse Creek is as beautiful as its reflection and one lone duck paddles nonchalantly by. 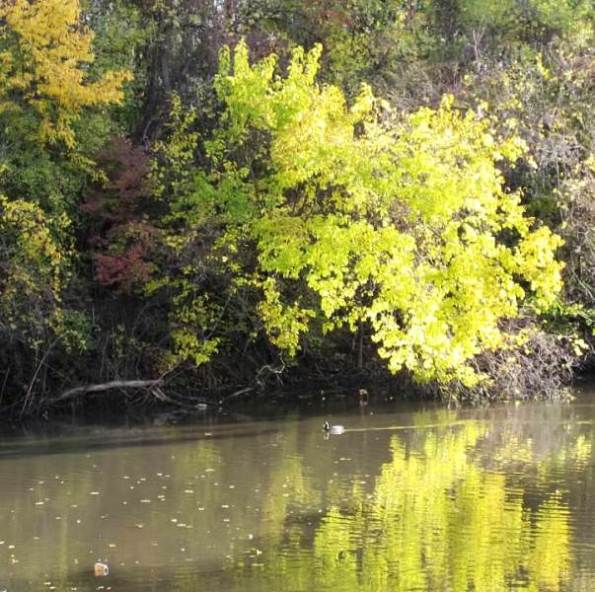 The Park’s vibrant colors are evident in this shot, though the one squirrel is unfazed by it all.

And look at that one oddball dark cloud that mars the sky.

And finally, in a row of mostly green trees, this one vibrant tree sticks out like a sore thumb – a very beautiful sore thumb!

I’m happy to report that I saw no coyotes and my most-recent peek at the City’s Crime forum tells me a large coyote has been sighted on the opposite end of our city and two coyotes in Wyandotte.

Next I headed to Elizabeth Park.  I originally intended to include both park visits in today’s post but I took a ton of photos at Elizabeth Park.  Now I must admit I always take a lot of photos, but this time I took twice as many because shortly after I arrived there, the sun dipped behind the clouds.  Bummer!  It had been a beautiful day … but I took pictures of the leaves anyway.

I got all done walking the 1¼ mile perimeter loop, up and down every bridge, along the boardwalk and  then the sun came out!  So, I decided to retrace my steps and do another identical tour of Elizabeth Park.  Remember that I did a mile at Council Point Park already, so I logged 6 ½ miles altogether.  I’ll have to winnow down my photos, so stay tuned for “Leaf Peepin’ – Part II.

This is my first blog and I enjoy writing each and every post immensely. I started a walking regimen in 2011 and decided to create a blog as a means of memorializing the people, places and things I see on my daily walks. I have always enjoyed people watching, and so my blog is peppered with folks I meet, or reflections of characters I have known through the years. Often something piques my interest, or evokes a pleasant memory from my memory bank, so this becomes a “slice o’ life” blog post that day. I respect and appreciate nature and my interaction with Mother Nature’s gifts is also a common theme. Sometimes the most-ordinary items become fodder for points to ponder over and touch upon. My career has been in the legal field and I have been a legal secretary for four decades, primarily working in downtown Detroit, and now working from my home. I graduated from Wayne State University with a degree in print journalism in 1978, though I’ve never worked in that field. I like to think this blog is the writer in me finally emerging!! Walking and writing have met and shaken hands and the creative juices are flowing once again in Walkin’, Writin’, Wit & Whimsy – hope you think so too. - Linda Schaub
View all posts by Linda Schaub →
This entry was posted in Uncategorized and tagged Fall, Fall Foliage, nature, Trees, walk, walking. Bookmark the permalink.