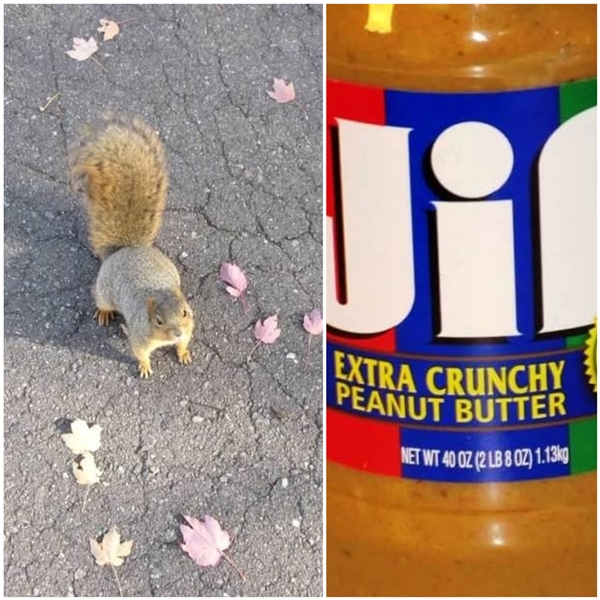 Fall continues to hum along.  I have to look at the calendar every morning to remind myself what month it is, let alone what season we are currently in.

We awoke to snow on Friday morning.  It was an ugly taste of what’s in store for us, after a wintry precip descended on the Tri-County area, followed by a blast of frigid air, the likes of what you’d find in January or February.  Yesterday’s “real feel” when I awoke was a mere 7 degrees F (-13C).

It was not so bad this morning as the “real feel” was 23 degrees when I left the house.  The sky was gray and I planned on a walk at Council Point Park and then coming home to do yard work – ugh.  The only thing worse than yard work on a cold November day, is yard work when the winds are gusting over 15 mph.  It really was pointless to rake leaves as they were fluttering down from every tree in the neighborhood.  Here, there and everywhere were carpets of red and yellow leaves and the wind had them destined in the direction of my house.  Let’s just say there will be many more leaves to rake before the City ceases yard waste pick-up the week after Thanksgiving.

November does have its merits though … not only is there a long weekend for most folks, and that delicious turkey dinner you are already salivating over, but it is also National Peanut Butter Lovers Month!  Are you in this club?  I sure am, and I could just stick a spoon into the jar and enjoy it like that.  The more sensible way to enjoy peanut butter might be ants on a log (peanut butter spread on celery with raisins on top) or a SMALL dollop with jelly on a sandwich, but why waste time and effort when a tablespoon is just as handy to fetch that delicious Jif crunchy peanut butter?

Of course, I know the squirrels love peanut butter, probably just as much as me.  I’ve taken them Nutter Butter mini sandwich cookies several times, and even made them little peanut butter sandwiches when my bread was getting stale.  Of course, they lick the peanut butter off and toss the bread aside … their manners aren’t always the best!

So, I decided to take some peanutty treats to the Park today since it was a weekend and I had time to dispense treats and get some photo ops along the way as well.

Here’s what I packed: 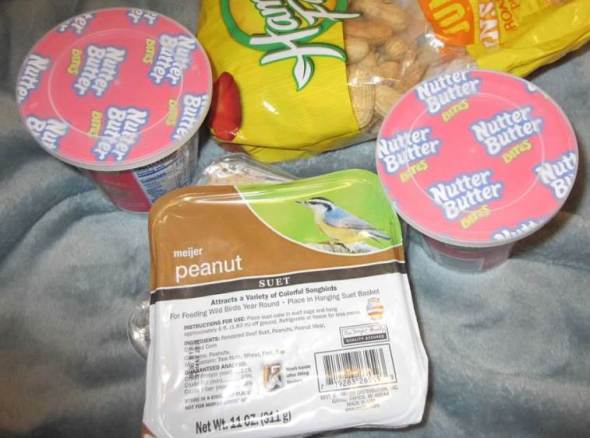 The two trays of peanut suet ostensibly were for the Park birds, though I know squirrels enjoy suet just as much as their feathered friends.  At any rate, there is no doubt in my mind that when I return to Council Point Park on Monday all these treats will be gone.

This squirrel’s got curb appeal!

I drove to the Park to give the car a run.  I barely had time to park and hop out and there was Parker,  scurrying along the curb, headed toward me.   I often tell you about how he meets me at the entrance to the Park, before I even hit the trail, so I got some pictures today of Parker’s meet-and-greet routine at the parking curb.  Now there’s a squirrel with curb appeal.

I shared some peanuts and Nutter Butters with him.

He honed right in on the peanuts.

A few were gobbled up on the spot and a couple were grabbed “to go” because Parker, being the prudent squirrel that he is, knows Winter is on the horizon.  Instead of racing across the parking lot to the soccer field to hide those peanuts, with paws working furiously, and dirt a’flyin’, he quickly buried those peanuts close to the parking curb.  This is probably because he was afraid to leave his cache of treats for too long.  Had he asked, I probably would have guarded them for him until he returned, but he knows best.  🙂 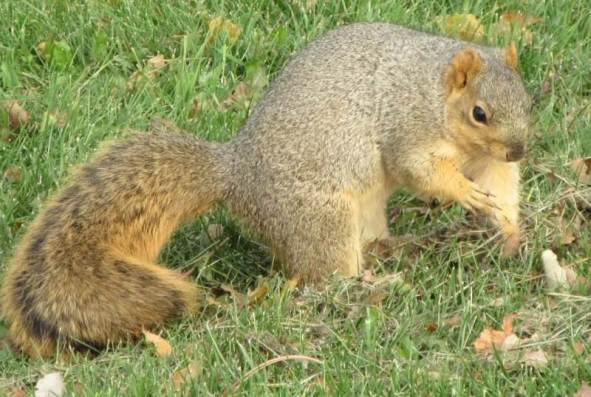 It was time to move on and I crossed the parking lot and a couple more hungry squirrels greeted me as I entered the trail.  They danced around my feet (obviously having learned that trick from Parker – hmm).

They didn’t have to wait long for peanuts and Nutter Butters to come their way.

Then I went over to the pavilion to deposit the pair of suet cakes, some peanuts and Nutter Butters on the picnic table. 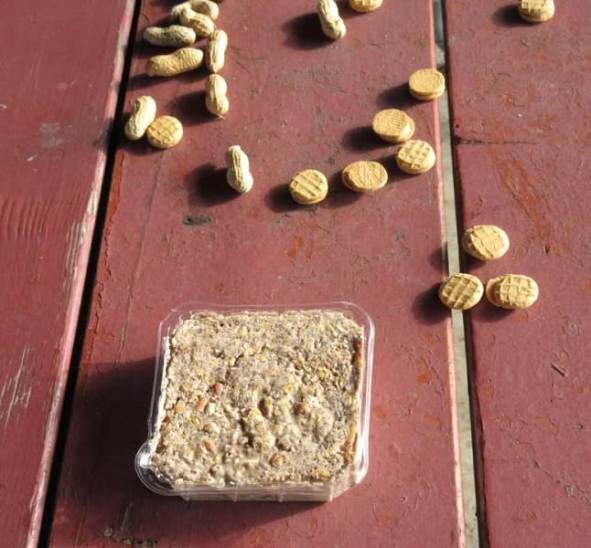 Unfortunately no squirrels were watching me, but my feathered and furry friends will find their treats soon enough.  I’ll report on whether they finished them in my next post.

I tried out my new flip-top fingerless gloves and I should have worn the liners I got to go with them.

Honestly, I figured the gray sky when I was ready to leave would preclude taking a lot of pictures, but that 23-degree wind chill I heard about on the morning news should have been a clue that my fingers would freeze.

Take a look at my frozen and red exposed fingers!

I fed squirrels along the way and small piles of peanuts and Nutter Butters with happy squirrels noshing on them dotted the perimeter path.  One squirrel spotted me from a tree …

… came down for treats, then scurried back up again.

The sun came out shortly after I arrived.  It didn’t help the frosty temps, but it made for a great walk, even if it was blustery.  Those beautiful leaves were fluttering down and landing beneath the trees, trees which were still bright and colorful just a handful of days ago. 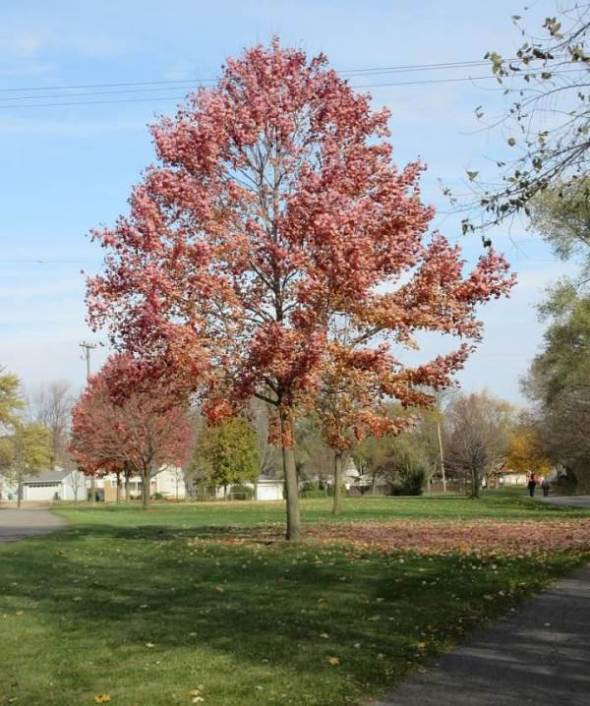 I rounded the bend and saw the heron sitting on the cement landing and studying the surface of the water.  I must have interrupted his concentration as he bolted away with an angry squawk, but instead of flying down the narrow passageway as he usually does, he just flew across the Creek and landed on a log where he appeared to glare at me.  I got several pictures of that harassed heron and some idyllic images of ducks paddling along in the water which glimmered with the reflection from the overhanging yellow tree.  I’ll share those photos in a separate post when I tell you how the crowd enjoyed the rest of their peanutty treats.

I enjoyed my walk, all six miles of it, and the sun gave me a shadow that rated an “A” on the shadow meter. 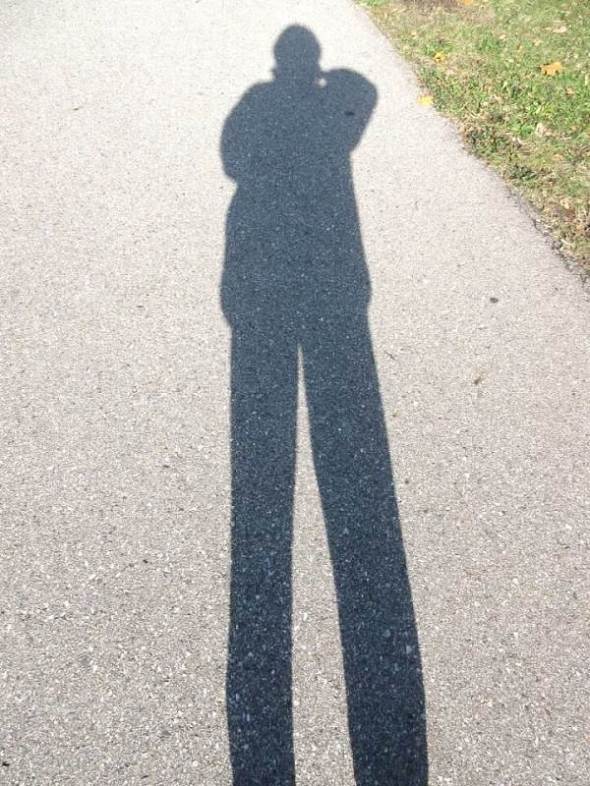 This is my first blog and I enjoy writing each and every post immensely. I started a walking regimen in 2011 and decided to create a blog as a means of memorializing the people, places and things I see on my daily walks. I have always enjoyed people watching, and so my blog is peppered with folks I meet, or reflections of characters I have known through the years. Often something piques my interest, or evokes a pleasant memory from my memory bank, so this becomes a “slice o’ life” blog post that day. I respect and appreciate nature and my interaction with Mother Nature’s gifts is also a common theme. Sometimes the most-ordinary items become fodder for points to ponder over and touch upon. My career has been in the legal field and I have been a legal secretary for four decades, primarily working in downtown Detroit, and now working from my home. I graduated from Wayne State University with a degree in print journalism in 1978, though I’ve never worked in that field. I like to think this blog is the writer in me finally emerging!! Walking and writing have met and shaken hands and the creative juices are flowing once again in Walkin’, Writin’, Wit & Whimsy – hope you think so too. - Linda Schaub
View all posts by Linda Schaub →
This entry was posted in Uncategorized and tagged Fall, National Peanut Butter Lovers Month, nature, Park, Squirrels, walk, walking. Bookmark the permalink.