All the leaves are brown … 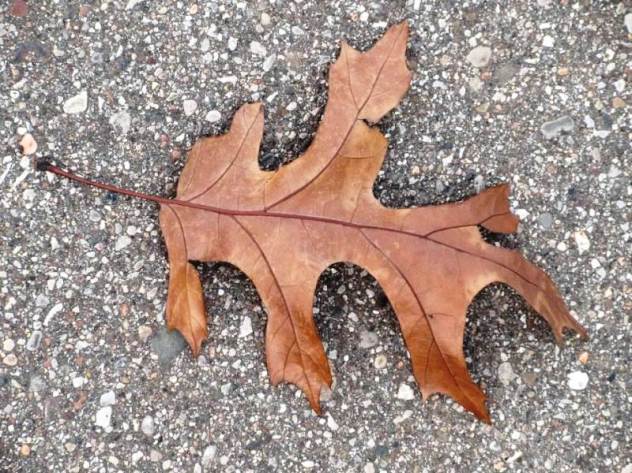 I’ve been for a walk,

On a Winter’s day.

The opening part of this song [“California Dreamin’” by The Mamas & the Papas] just tells it like it is on a gray and cold Winter’s day.  However, I need to pinch myself to remember Winter is not here yet, despite how it looks or feels outside.

Well, it seems as if I’ve been absent from posting in this forum for weeks and really it has only been four days.  I know I was behind in commenting and reading blog posts – it is all because last weekend I went on a mission of sorts.

Three weather stations predicted our weather would turn ugly starting tonight with sleet and rain, and continuing all through the upcoming weekend.  It is pouring as I write this post.  So, I bemoaned the fact that another weekend would be lost to ugly weather, and decided to take advantage of last weekend’s back-to-back sunny days.  It didn’t matter that the wind chill hovered in the teens when I went out – it was sunny and dry and that was all that mattered.

So, I layered up and made the most of those sunny days and meandered around five different parks.  I walked 6 ½ miles each day, maybe closer to 7 miles on Saturday.  I took tons of pictures – way too many pictures in fact.  Admittedly, it is too easy to click away a second or third time just because the seagull took a different pose on the boardwalk railing, or maybe even wiggled an eyebrow at me (if indeed seagulls have eyebrows).  I cannot tell you how many different photos I came home with last week as I studied Harry the Heron’s feather configuration which, thanks to the wind, gave him a definite punk rock look.  Back in the days of using a film camera, two entire days of walking and picture-taking would never yield an eighth as many images as I took over the course of these two days – I am still sorting them out and hope I don’t forget any of the little stories that are going to accompany those photos!  I made it my mission to enjoy those two days to the fullest.

The sunny weather brought out a handful of folks who preferred a walk in the marsh to a trudge through the mall.  I went to five different parks over Saturday and Sunday and met some nice fellow nature lovers and will share some conversations and nature-related pictures I took over the next few weeks … how about I intersperse those posts with some Christmas posts?

I hate being inconsistent and doing three posts in as many days, then no posts, but I was scrambling the past few days as well.  My boss was in meetings all day Monday, so I went off on errands and grocery shopping, making it my mission to finish any running around for the rest of this year.

I made it back to Council Point Park yesterday and today, though this morning I barely made it there on time to get back to work.  My alarm did not go off this morning … oh, it wasn’t broken, I tested it later today.  I just forgot to pull it last night.  (And how many years have I been getting up to an alarm clock in the morning?)  So, I scrambled to get ready and out the door, not very well put together, but I don’t think the squirrels care … at least they didn’t let on they noticed!

I have a new trick up my sleeve with my furry pals.  I knew last week I’d be going to Lake Erie Metropark, Elizabeth Park, Heritage Park, Bishop Park and Dingell Park and would not be there to feed them, so last Friday I showed Parker and his pals a new place where I can stash peanuts … the water fountain at Council Point Park has never worked and so I dumped some nuts in there for them.  The cement base that supports the water fountain is porous enough for tiny paws to climb up and hold on, then the platform up top is perfect for sitting and eating those peanuts.

You must give our squirrels friends some credit here … it took me just ONE time of having Parker and his buddies watch what I did with those peanuts.   I did this exercise again Tuesday morning, and this morning, the peanuts were gone and they were waiting by the fountain for me.  (Better than waiting in the parking lot.) 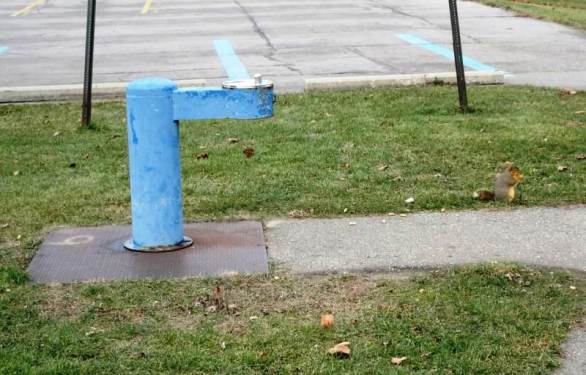 Also, every day I have been saving a couple of peanuts to toss to a little gray squirrel in the neighborhood just before I come into the house after my walk.  Since I ran errands on Monday, I returned home to find this gray squirrel sitting on the porch patiently awaiting my return.  I felt so badly!  Obviously he was waiting for me to return from my walk and I was several hours later than my usual time.  He had a sad face and I went scurrying into the house for a treat for him.  I am always a sucker for a cute squirrel and he got about ten peanuts … yesterday and today, he was waiting when I returned from walking so I guess we have established a rapport and routine between us.  I just bought six more bags of peanuts at the grocery store Monday, some peanuts which will be destined to go to this guy who I think I’ll name “Grady” as that name works nicely with “gray squirrel” and “Go-Getter” doesn’t roll off the tongue so well.

This is my first blog and I enjoy writing each and every post immensely. I started a walking regimen in 2011 and decided to create a blog as a means of memorializing the people, places and things I see on my daily walks. I have always enjoyed people watching, and so my blog is peppered with folks I meet, or reflections of characters I have known through the years. Often something piques my interest, or evokes a pleasant memory from my memory bank, so this becomes a “slice o’ life” blog post that day. I respect and appreciate nature and my interaction with Mother Nature’s gifts is also a common theme. Sometimes the most-ordinary items become fodder for points to ponder over and touch upon. My career has been in the legal field and I have been a legal secretary for four decades, primarily working in downtown Detroit, and now working from my home. I graduated from Wayne State University with a degree in print journalism in 1978, though I’ve never worked in that field. I like to think this blog is the writer in me finally emerging!! Walking and writing have met and shaken hands and the creative juices are flowing once again in Walkin’, Writin’, Wit & Whimsy – hope you think so too. - Linda Schaub
View all posts by Linda Schaub →
This entry was posted in Uncategorized and tagged Fall, Leaves, nature, Squirrels, walk, walking, Winter. Bookmark the permalink.

40 Responses to All the leaves are brown …