Pretty please, could I have some peanuts?

Ahhh … there’s nothing like the smell of fresh peanuts.  Whether it hearkens back to the vendor hawking packets of fresh-roasted peanuts at the circus, or a baseball game [“peanuts, peanuts … get your fresh-roasted peanuts”], or simply ripping the seal off the jar of Jif Extra Crunchy Peanut Butter, to many it is an aroma that rivals the finest chocolate.

I finally got to the grocery store yesterday with the threat of another wintry precip morning looming, so I decided I’d better high tail it out and get some peanuts for my Park and porch pals.  I didn’t want to resort to rationing the porch pals’ peanuts again and I really didn’t want to end up serving tortilla roll-ups stuffed with peanut butter to Parker and his friends.  After all, I think I owe my allegiance to Parker and his pals, as they’ve not had the benefit of “droppings” every morning to tide them over until their paws and claws can begin digging up those buried nuts.  We’ve had incredibly frigid weather the last three days with subzero overnight temps.

When I got to Meijer, I went to the usual spot where they have the bagged peanuts.  A new display was there for dried fruit snacks.  Panicked, I looked around for where they might be.  Meijer does not have loose nuts of any kind in their store, so if they quit selling the Hampton Farms peanuts I’d be up a creek.  It turned out they merely moved them – whew!  I got eight bags and that ought to keep everyone happy for a while.

I gave my “porch pets” extra peanuts this morning, shortly after sunrise.  Those squirrels and birds give me a smile with their antics.  Lately, just like clockwork, they arrive, two by two, as if they are lining up to get on Noah’s Ark.  If I don’t make a dropping of peanuts early enough for their liking, when I open the door, one of the two blue jays greets me with a big screech that sounds like “slacker, where’s my breakfast?”  The pair of cardinals, male and female, think they are concealed in the barberry bush.  The female blends into the twigs, so I can’t see her well unless she hops from branch to branch, but the male’s beautiful red plumage makes him stand out, especially on these gray days.  The squirrels … well, they live across the street and when I open the door, I see immediate movement in the trees.  I picture two heads bobbing out of their respective nests and saying “Linda’s put our peanuts out!”  Soon Grady and his pal are scurrying across the street to my house.

These days I see less nutshells on the porch and with our recent sub-zero temps, I know that the squirrels aren’t hiding those  nuts in a hole.  The birds are really no savvier than the squirrels, BUT, they abide by the proverb “the early bird catches the worm” … all that swooping and swiping that goes on tells me the squirrels better set their alarm clocks earlier.

The squirrel featured in today’s post is not Parker and his pals, nor Grady’s pal, but one who lives at Elizabeth Park.  When I made my foray to four parks last Sunday, I decided to keep that post squirrel-free since the bird was the word that day.  [You know it was killing me to leave this furry fellow out of that post.]

I parked the car and crossed the vehicle bridge and this squirrel started chattering at me as I passed “his” tree.

I glanced up at him and we had a quick stare down, followed by a Pavlov’s dog-like movement on my part, wherein I patted my pocket to feel if I had enough peanuts in the Ziploc bag to offer him, while simultaneously unzipping the camera pouch to get ready to take his picture.

I stood next to his tree, grateful the incessant flurrying that had plagued me on my earlier jaunt to Lake Erie Metropark, had finally stopped, so perhaps I could get a few photos of him.  I wiggled the bag, even took out a few peanuts and held them between my fingers to lure him down.  It worked. 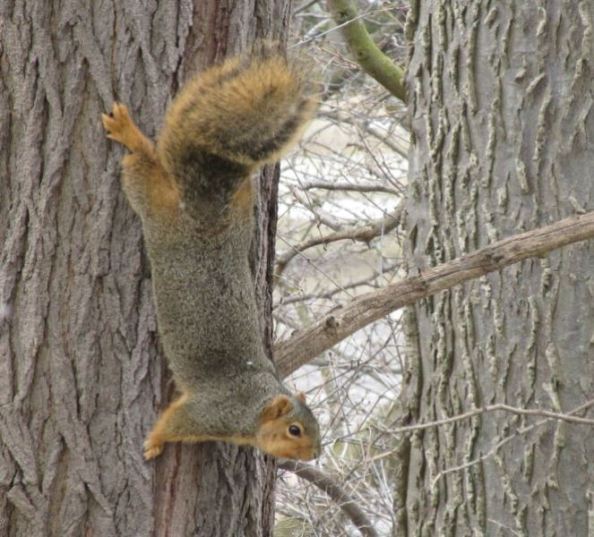 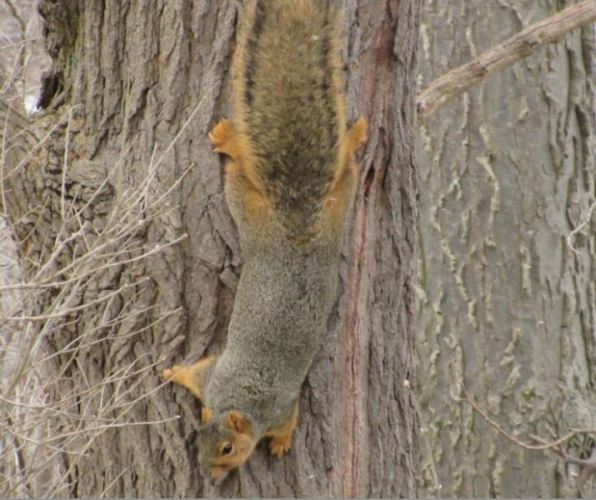 I watched his slow descent and then, as he got closer to me, he ran back up the tree.  Really?!  What did I do?  My moniker at Council Point Park is “The Peanut Lady” and I am usually a squirrel magnet, so I was a little puzzled by his reluctance to come closer.  I said to no one in particular “well suit yourself Bud” and proceeded on my trek down to the channel.

Well, I guess he did not like my dismissive attitude.  I felt a presence behind me while taking pictures of the ducks and geese that lined the channel and noticed him begging at my heels.  I turned around – so, who could walk away from those sad eyes and begging stance that you see pictured at the top of this post?  Not me.  I told him he was lucky 1) that I don’t carry a grudge, and 2) that I always carry a Ziploc bag of peanuts in my pocket, whether I’m walking or just outside, and this time he should stick around because it was worth his while to do so.

I poured out some peanuts and, as I fed him, he was happy to oblige me for a few pictures.

While I was taking pictures, a gentleman came along and remarked “there are more panhandlers in this park then there are in San Francisco” and I replied that it is such a large park that I’ve never been “hit on” before.   [I didn’t know about the panhandler situation in San Francisco; I was last there in 1980, so I didn’t remark on that comment.]  What I did say was that my reputation of being “The Peanut Lady” at Council Point Park was true.

After we chatted awhile, he moseyed on, bidding me to have a good day, and I left my furry friend who was happily noshing peanuts on the snowy grass.

I walked down near the big bridge, which you’ll recall was a tad icy/snowy so I stopped in my tracks and retraced my steps.  On the way back, my little pal was gone and only peanut shells remained from our visit.  I walked up the hill and at the very same location, if he didn’t begin chattering at me again.

Quick as a whip, he was down the tree and we were having another face-to-face encounter.  It began to snow so I didn’t want to linger, but emptied the bag onto the cement and pointed to the meager offerings and left.

As I drove out of Elizabeth Park about fifteen minutes later, the peanuts were still there.  Perhaps he could not believe his good fortune of being in the right place at the right time earlier and his Mama reared him right – he shares with others.

This is my first blog and I enjoy writing each and every post immensely. I started a walking regimen in 2011 and decided to create a blog as a means of memorializing the people, places and things I see on my daily walks. I have always enjoyed people watching, and so my blog is peppered with folks I meet, or reflections of characters I have known through the years. Often something piques my interest, or evokes a pleasant memory from my memory bank, so this becomes a “slice o’ life” blog post that day. I respect and appreciate nature and my interaction with Mother Nature’s gifts is also a common theme. Sometimes the most-ordinary items become fodder for points to ponder over and touch upon. My career has been in the legal field and I have been a legal secretary for four decades, primarily working in downtown Detroit, and now working from my home. I graduated from Wayne State University with a degree in print journalism in 1978, though I’ve never worked in that field. I like to think this blog is the writer in me finally emerging!! Walking and writing have met and shaken hands and the creative juices are flowing once again in Walkin’, Writin’, Wit & Whimsy – hope you think so too. - Linda Schaub
View all posts by Linda Schaub →
This entry was posted in Uncategorized and tagged nature, Squirrels, walk, walking. Bookmark the permalink.

38 Responses to Pretty please, could I have some peanuts?