Too pooped to participate. 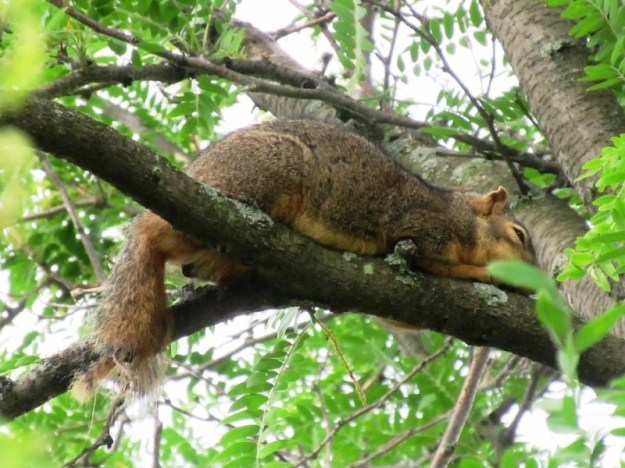 Again our weekend weather has been a disappointment as I continue to shake my head about this decidedly weird Spring we’ve had.  Yesterday, the weather folks called for rain and several thunderstorms beginning at dawn, then off and on throughout Saturday; Sunday and Monday would feature hot-and-steamy temperatures in the mid-90s with a heat index of 100+ degrees – ugh.  We might as well morph right into Summer as it makes its debut next Thursday anyway.

Because of my walking regimen, and, more because I am a weather worrier, I follow a few meteorologists, plus check out the online Weather Channel at www.weather.com on a daily basis.  Yesterday everyone predicted this rainy/stormy Saturday.  But, because they are often wrong, when I went to bed Friday night, I told myself “you’ll get up the usual time, look outside at dawn and if it is not raining, you’ll go on a walk” … so that was my mindset when the alarm went off this morning.  However, I’d already had breakfast, including coffee, when the first rumble of thunder started around  5:30 a.m.  It was one of those long, deep rumbles that precedes the first huge splats of rain, and then the inevitable thunderstorm.  Another walk ruined!   I decided I was not going to be consulting the window, the weatherman, nor Weather.com all day long to try to fit in a walk.  I was so disgusted that I turned off the kitchen light and went back to bed.  I didn’t even bother resetting the alarm.  I’d just wake up when I was good and ready.  (So there!)  Well, I woke up around 9:30 a.m. and saw sunshine streaming through the blinds.  I got up and looked outside – clear as a bell with a blue sky and the sun shining brightly.  I was disgusted with myself, Mother Nature and all the weather “experts” and I turned on the radio just as the weatherman said “it’s currently 75 degrees, 75% humidity and a storm is coming around noon.”

So I sprang into action, in an effort to salvage a walk and be home before the stormy weather arrived.  I took the car for a spin and off we went to Council Point Park.  I drove past the woodchuck who was way at the outskirts of the Park and I silently said “hold that pose, I’ll be there in about 15 minutes” and pulled into the parking lot.  It was already hot and sticky as I crossed the parking lot, and I started on the second loop first, but the woodchuck was long gone, likely back in his cool underground burrow to avoid the heat and another photo op.  I did two complete loops on that side of the Park just in case he had a change of heart and emerged, but he did not.

I then headed over to the other side of the Park.

I don’t know if it was the heat, my late arrival, or the commotion of a graduation party going on at the pavilion area, but there were no furry peanut pals there to greet me at the beginning of the trail.  Perhaps the loud hum of a generator that was running near the pavilion (to keep the party food and drinks cold) had scared them off.  However, on the second time around this loop, I heard squirrels chattering and looked up in a tree to find two squirrels laying on different tree branches.  I spoke to them, but they didn’t acknowledge me like they usually do by scrambling down the tree to hurry over to my feet.  They just stayed there, sprawled out, their furry forms and bushy tails stretched along the thick branch.  Were they sick or just being lazy?  Was their energy zapped by the heat and humidity like mine was?  I took out the Ziploc bag of peanuts and wiggled the plastic bag, but there were no takers, and I even lined up a few peanuts on the asphalt path – still no movement by them.  Just  blank stares and their lounging position up in the tree.  I decided I would not hang around any longer to coax and cajole them.  They were obviously new to the Park since they didn’t recognize one of their most-faithful benefactors, so I moved on.

Before I left, I took some pictures of this pair of slackers, and, as I walked away I decided they’d be the subject of today’s post and I knew just the title for it:  “Too pooped to participate” – you don’t hear this expression much anymore, but it was a common and polite way to “beg off” doing something by simply saying “sorry, I’m too pooped to participate.”

My mom used to love to do jigsaw puzzles and she especially enjoyed those puzzles that featured the artwork of painter Charles Wysocki.  His Americana folk art paintings often featured horse and buggy rides and quaint farmhouses, but there were unique animal scenes as well.  I’d see those puzzles in progress on the puzzle board, so I got familiar with his artwork.

One Wysocki puzzle Mom did was the reproduction of this painting entitled “Too pooped to participate” and this photo of  one of those sleepy squirrels reminded me of this scene. 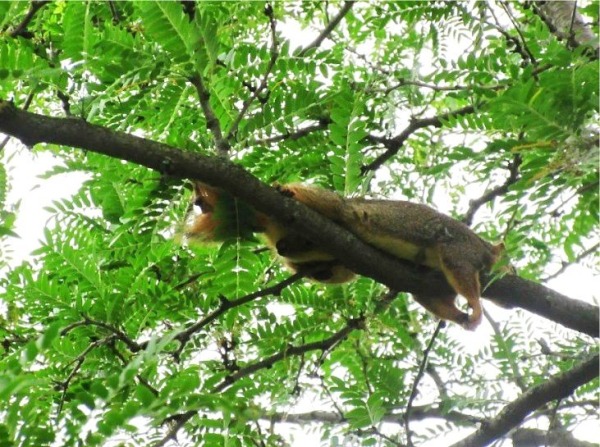 I did two complete trips around Council Point Park, only four miles today, but they were bonus miles that I didn’t count on given the dire weather forecast.  And, as I write this post, while I don’t welcome bad weather anytime, it still has not rained or stormed.

[Image of “Too pooped to participate” by Charles Wysocki from Pinterest.]

This is my first blog and I enjoy writing each and every post immensely. I started a walking regimen in 2011 and decided to create a blog as a means of memorializing the people, places and things I see on my daily walks. I have always enjoyed people watching, and so my blog is peppered with folks I meet, or reflections of characters I have known through the years. Often something piques my interest, or evokes a pleasant memory from my memory bank, so this becomes a “slice o’ life” blog post that day. I respect and appreciate nature and my interaction with Mother Nature’s gifts is also a common theme. Sometimes the most-ordinary items become fodder for points to ponder over and touch upon. My career has been in the legal field and I have been a legal secretary for four decades, primarily working in downtown Detroit, and now working from my home. I graduated from Wayne State University with a degree in print journalism in 1978, though I’ve never worked in that field. I like to think this blog is the writer in me finally emerging!! Walking and writing have met and shaken hands and the creative juices are flowing once again in Walkin’, Writin’, Wit & Whimsy – hope you think so too. - Linda Schaub
View all posts by Linda Schaub →
This entry was posted in Uncategorized and tagged Heat, nature, Park, Spring, Squirrels, Summer, walk, walking. Bookmark the permalink.

30 Responses to Too pooped to participate.