Christmas is coming, the geese are getting fat … 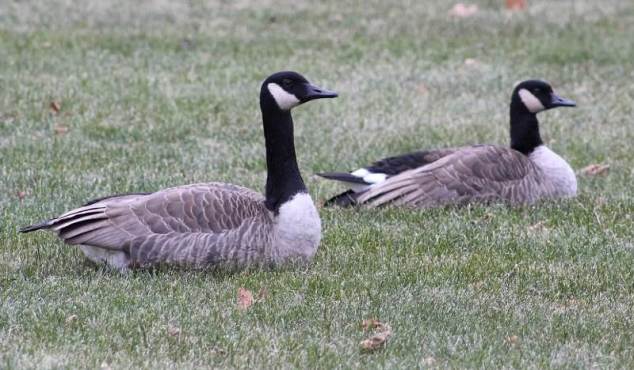 Our Southeast Michigan weather is so fickle … today it will climb to 48 degrees F, and it has been raining off and on all day.  On Thanksgiving, I trekked around Council Point Park for six miles, and, when I left the Park, it was only 23 degrees F.  The weatherman says our November temps have been more characteristic of January weather and today is a fluke.

Though it seems like I am always griping about the weather, especially this year, I know I am not alone.  Reading fellow blogger’s posts from all around the globe, the weather in 2018 has been extreme for each successive season.  For us, it’s been too snowy, too cold, too rainy, too hot, too cold too soon and where the heck was the Autumn we all enjoy so much?  What happened to Indian Summer this year – well pfft!

Even more disturbing than the grumblings about saturated Saturdays and soggy Sundays, are the disastrous wildfires and more volatile than usual hurricanes and tornadoes.  We had four tornadoes close to where I live this Summer, plus Southeast Michiganders experienced a minor earthquake in April and a meteorite strike in January.  The top priority item on the news this morning was the report on global warming and climate change … so folks, this funky and dangerous weather is here to stay.  Here’s the official report in case you missed it:

Because I did my fun gluttonous squirrels post for Turkey Day, I saved the narrative and pictures from that Thanksgiving Day walk for yesterday and today.  First, I wanted to write about Brian Skinner’s memorial tree at Council Point Park, as I have spotlighted other memorial trees in the past, but this one really tugged at my heart strings and today’s post will be about the nature part of that Turkey Day trek.

I had intended to go to make a few stops along the  Detroit River for a leisurely stroll and to take some pictures.  Beautiful Bishop Park is close by the downtown business district of Wyandotte, and all along Biddle Avenue is chock full of quaint shops and unique eateries.  I figured once Black Friday arrived, parking might be at a premium.  So I was a little bummed that the blustery and bitter cold day and sunless sky deterred me from heading to the River. despite being bundled up to the hilt.  What a weenie I am sometimes.

I did enjoy my six-mile meander around Council Point Park though.  There were two other walkers there besides me.  I guess everyone else was at home preparing for the big feast.

Some glare ice was on the perimeter path, but not as much as earlier in the week when the other walkers and I were forced to walk on the snowy grass, as icy patches covered the width of the path.  I should have taken some pictures of it, but there will be plenty more incidents of ice and snow frozen to the asphalt path in the months ahead unfortunately. 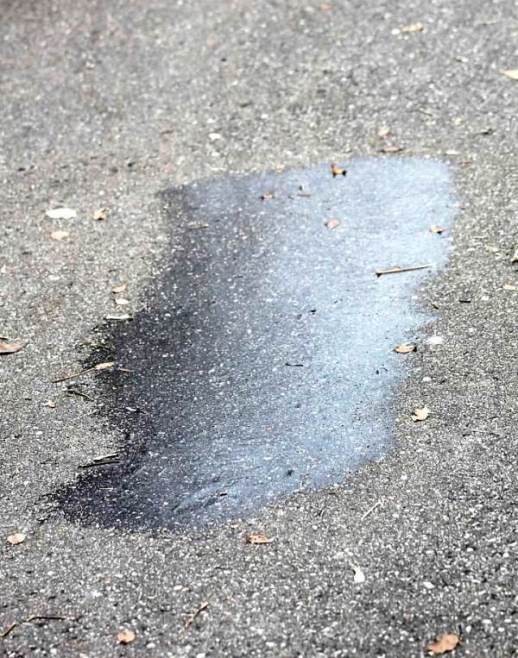 … on the stumps and logs of the recently removed trees and bushes as well. 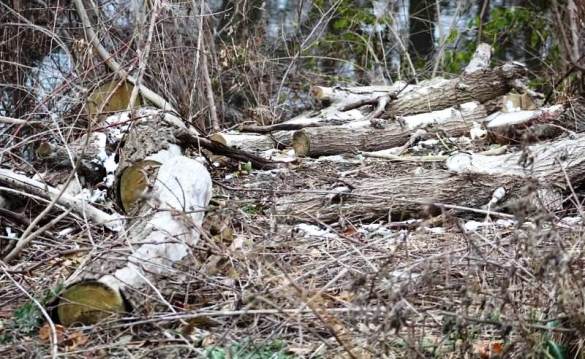 This is a wacky-looking tree and amazingly, it looked to have some new growth going on behind it.

Along the edge of the Ecorse Creek, the landscape is barren and blah since most of the trees are bare.  The wheat-colored reeds were riffled by the wind and blowing in the breeze. 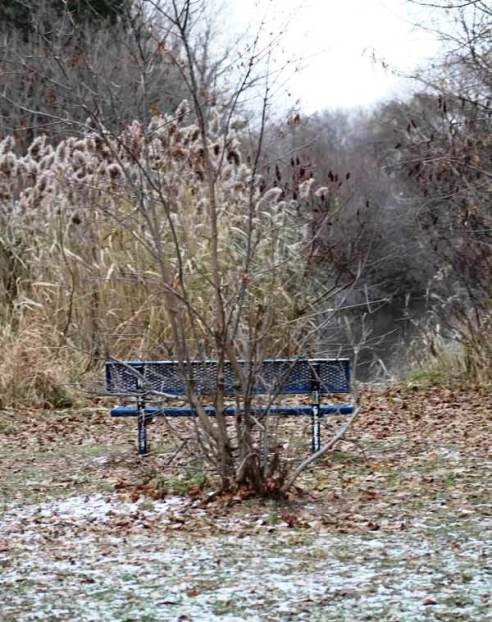 Even the burrs are brittle and their stems are dry and dead.  I didn’t step too close so they wouldn’t try to hitch a ride on my britches like last year when I went through these bushes loaded with burrs to take pictures of the swans. 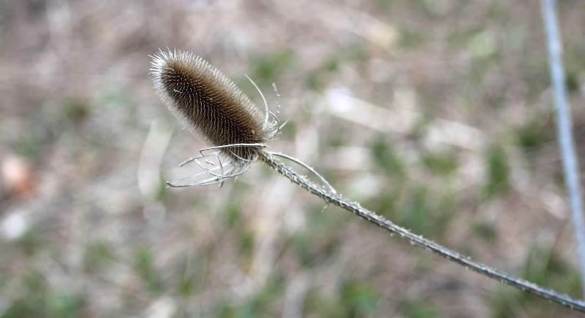 Now the berries are hanging on dead stems.

Tiny weeds and flowers still bloom against a background that is boring and drab.

At least the evergreens lend a dab of color to the scene.

A thin veil of ice covered over portions of the Creek, but it didn’t seem to faze the ducks.

They just navigated around the ice while they preened or dipped and dived for their breakfast.

Three geese were gobbling up the grass.

It was a treat to see the Canada geese, even if there was only a trio of them grazing in the “donut hole” of the perimeter path.  It’s only the second time this Fall that their visit has coincided with my trek to the Park, and both times they were grazing, and not in the water.

While watching those geese, I was reminded of a Christmas carol I learned when I was just a young girl growing up in Canada.  It was called “Christmas Is Coming” and it went like this:

“Christmas is coming, the geese are getting fat

Please put a penny in the old man’s hat

If you haven’t got a penny, a ha’penny will do

If you haven’t got a ha’penny, then God bless you!” 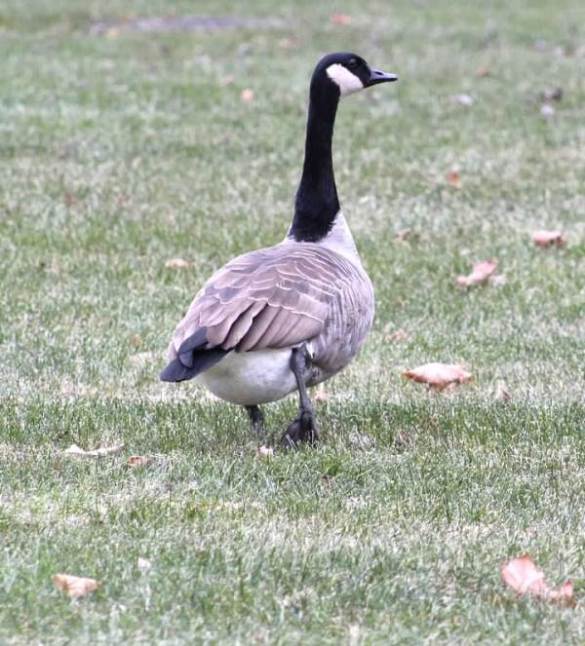 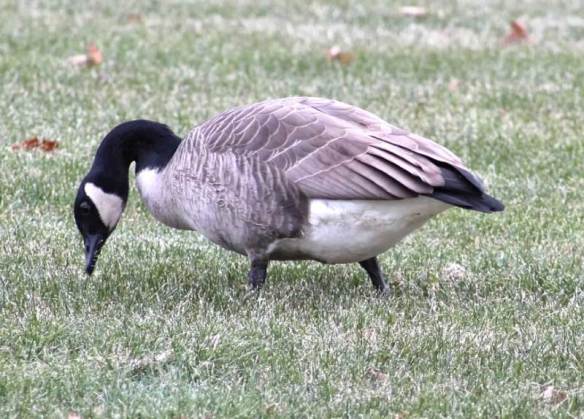 No squirrelling away the walnuts … they just ate ‘em up.

Of course no trip to Council Point Park would be complete without squirrels!  I did treat my squirrel pals royally for Thanksgiving by doling out walnuts … they lucked out since walnuts had been on sale at Meijer as people gear up for their holiday baking, so I bought another two bags since they enjoyed the last walnuts I took for them.  Those squirrels gobbled those goodies right up! 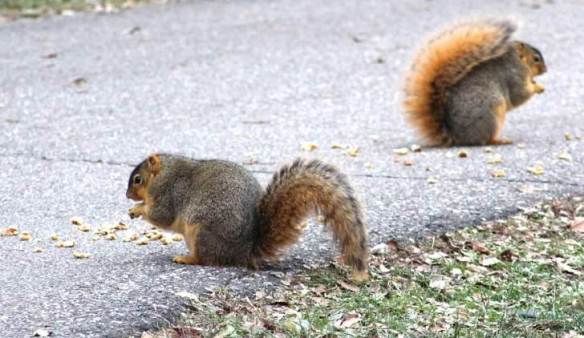 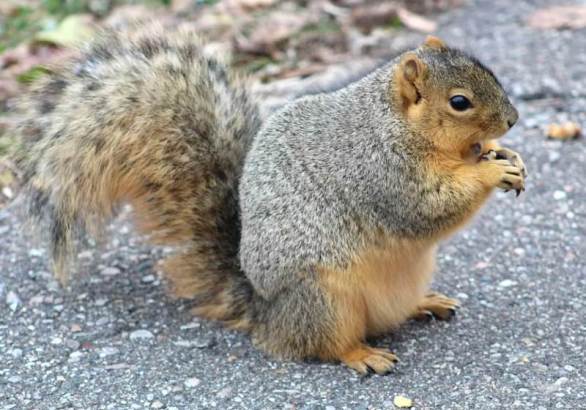 I’m not sure what happened to this little guy’s tail?  This is not Stubby with new tail growth as I saw him earlier on the path. 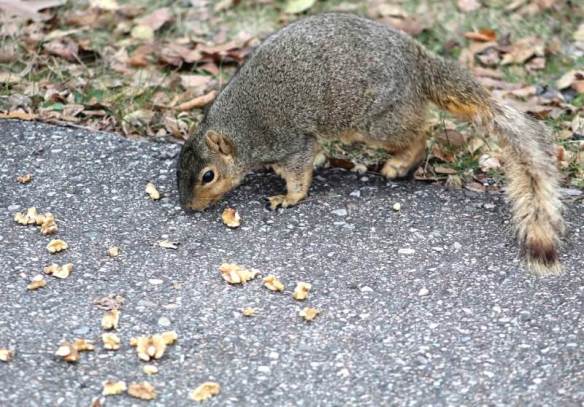 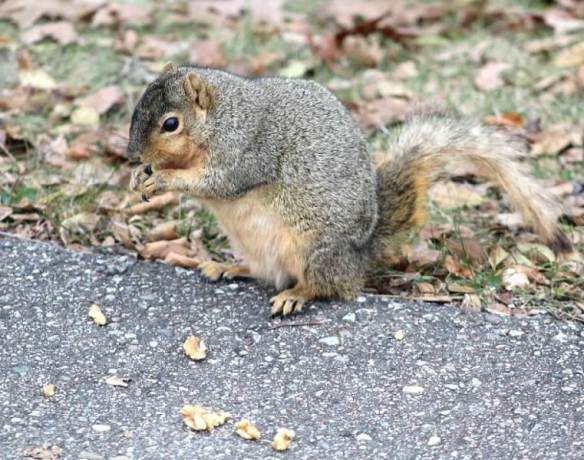 I had driven the car to the Park that morning, and, by the time I walked six miles, a few squirrels came looking for more goodies just before I was ready to head home.  One even climbed up on the picnic table, hoping I might be laying out some treats for him there. 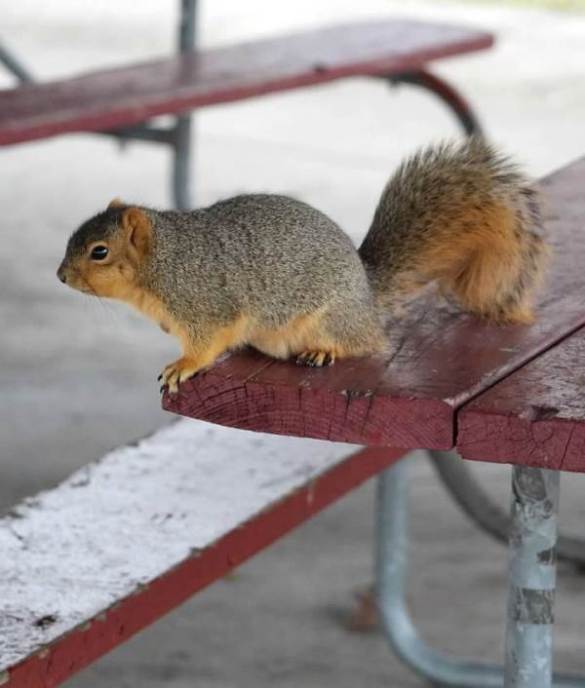 As he gave me a stony stare, I found myself feeling guilty, but I said “I’m sure you got walnuts already and if not, well … you snooze, you lose.”

They are relentless sometimes, but I know they are hungry right now.  And besides, who can resist this cute pose?   I do believe this squirrel needs some fattening up, don’t you?  Maybe I should make him the benefactor of more treats just like I spoil Parker? 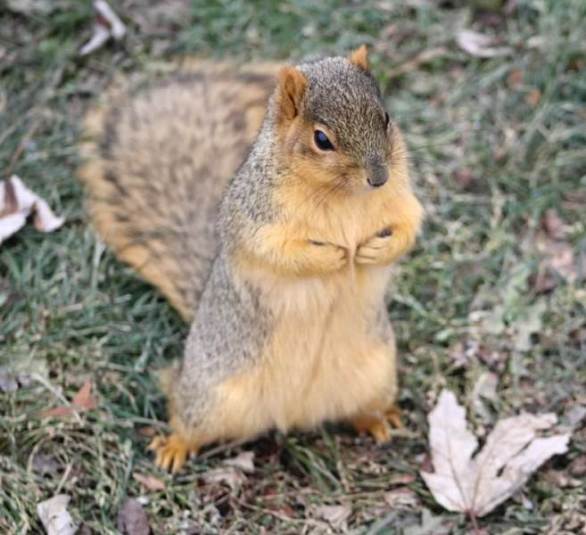 I managed to evade my furry pals at the very end so I could get to the car and zoom back home before they even knew I was gone.

This is my first blog and I enjoy writing each and every post immensely. I started a walking regimen in 2011 and decided to create a blog as a means of memorializing the people, places and things I see on my daily walks. I have always enjoyed people watching, and so my blog is peppered with folks I meet, or reflections of characters I have known through the years. Often something piques my interest, or evokes a pleasant memory from my memory bank, so this becomes a “slice o’ life” blog post that day. I respect and appreciate nature and my interaction with Mother Nature’s gifts is also a common theme. Sometimes the most-ordinary items become fodder for points to ponder over and touch upon. My career has been in the legal field and I have been a legal secretary for four decades, primarily working in downtown Detroit, and now working from my home. I graduated from Wayne State University with a degree in print journalism in 1978, though I’ve never worked in that field. I like to think this blog is the writer in me finally emerging!! Walking and writing have met and shaken hands and the creative juices are flowing once again in Walkin’, Writin’, Wit & Whimsy – hope you think so too. - Linda Schaub
View all posts by Linda Schaub →
This entry was posted in Uncategorized and tagged ducks, Fall, geese, nature, snow, Squirrels, Thanksgiving, walk, walking. Bookmark the permalink.

38 Responses to Christmas is coming, the geese are getting fat …