Got peanuts for me?

I decided to defer this post about nuts, and my pals that gobble them up, to today because I wanted to crow about my long-awaited goldfinch and heron finds.  Both those birds have been so elusive in the past, that I was happy to finally have one close-up of each of them.  I’m still marveling at those mysterious soaring birds, that numbered about a dozen, and most were the size of a pinhead on your screen when you read the post.  Those big birds were missing in action this morning, but had wreaked some havoc at my favorite nature nook – more on that later.

It was still dark outside when I listened to the news to decide where the car and my feet would take me today.  Truthfully, I really wasn’t too hepped up on what I heard … at 5:00 a.m. it was 71 degrees and the humidity was 93% with hazy skies and a chance of rain.  The national news focused on the “Heat Dome” that has rocked all of the Northern Hemisphere since late Spring.  They prefaced the story by saying “if you think it’s been hot this Summer, you’re not just imagining it!”   A slew of facts and figures followed and the story concluded by saying “get used to it, as this is the new normal.”  I wish that was “fake news” and I remember well how many people laughed at Al Gore’s predictions of global warming – laugh no more my friends.

When daylight arrived, I peered out the door and it was gray and gloomy looking, so I decided I was not going on any big excursion.  The weather once again made me switch my priorities.  My Summer weekend jaunts I’ve relegated to picture-taking expeditions to accompany my blog posts, while still getting the miles walked.  This weekend, I’ve focused on getting the miles walked before it got blistering hot, while still snapping some photos.

I drove to Council Point Park to give the car a spin, then walked six miles, which equaled three times around the entire Park.  I was grateful the sun still hadn’t put in an appearance and there was a slight breeze, so I wasn’t draggin’ my wagon, by the time I finished, like yesterday.

After Saturday’s sighting of the predator birds, I decided I would place the peanuts off the pathway and closer to the bushes, so the squirrels are not direct targets for the hawks.  They don’t care where they get their treats, although these days, they immediately scurry off to hide a few peanuts, so they are still in plain view for the hawk(s).  I sure can’t herd those squirrels into the pavilion area under the picnic table, although I have left peanuts there in the past when I knew bad weather might keep me at home for a few days.

This morning I arrived at the Park earlier than usual, trying to maximize my miles before it got too hot.  I scanned the skies and saw nothing up there, nor on the ground.  Yes, not a single critter, either furry or feathered, my first time around the entire park (two miles).

Of course, I thought the worst, especially after seeing a mess of feathers strewn across the pathway and grass on the first loop.  Judging from the many feathers left behind, that victim put up quite a fight.  I believe it was a robin judging from the plumage,.  It turned my stomach a little, and the next two times I passed, I looked the other way.  Yes, a cat might have attacked that poor bird, so I can’t really lay the blame on a particular predator.

The second time around the Park, I saw Mike, who also feeds the squirrels, and asked if he’d seen any squirrels and relayed the mysterious birds story.  He immediately asked if I saw the collection of feathers scattered all over and I nodded my head.  He said “they’ll turn up – it’s earlier than usual.”

Well, Mike was right – the third time was the charm as that saying goes.  Squirrels were coming out of the woodwork and I was happily doling out peanuts with a warning to them to stay near the trees and bushes to enjoy their peanuts and to please watch their backs.

Now, onto my post about the peanut pals yesterday.

I think I follow a fairly healthy, albeit boring, diet.  Lately it seems I’ve been bombarded with health tips encouraging you  to eat more nuts, since they are a natural way to add protein to your diet, plus they are chock full of vitamins.  “Throw away your vitamins and eat more nuts!” seemed to be the general consensus.  So, I decided to get on this nut bandwagon too.  After perusing the labels, I bought several varieties of nuts, all guaranteed to be nutritious and heart healthy (even if you read the disclaimer, i.e. – don’t go hog wild and eat too many of them!)

The cashews didn’t last long – that’s for sure.

There haven’t been cashews in this house for a few decades now, not since a coworker was selling plastic Santa Claus boots filled with whole jumbo cashews for her kid for Boy Scouts or some similar endeavor.  I bought one Santa boot to be sociable and brought it home.  The cashews were gone in record time and I clearly remember my mother asking “why don’t we ever get cashews – these were delicious?”  Well several months later she said “Linda, quit buying cashews every time you go grocery shopping because my pants are getting tight.”  I guess I forgot all about that scenario in my zeal to get healthier.

As to the mixed nuts, well, they were plenty delicious too, a tasty combo of peanuts, almonds, pistachios, pecans, walnuts and hazelnuts.  Yummy!

On the outside of the can, however, the suggested serving was one ounce, or 30 whole nuts.  Hmmm – really, you’re going to count them out?  Besides, many were just bits and pieces or halves anyway.  I measured out a small Dixie cup and decided that was my version of “one serving” although that piddling amount stretched into another serving.  Oops!  Then there were the almonds which were as hard as my head and I imagined biting down the wrong way on one and taking out my crown.  So, I fished out all the almonds from both cans of mixed nuts and put them in a Ziploc bag for Parker and his pals. 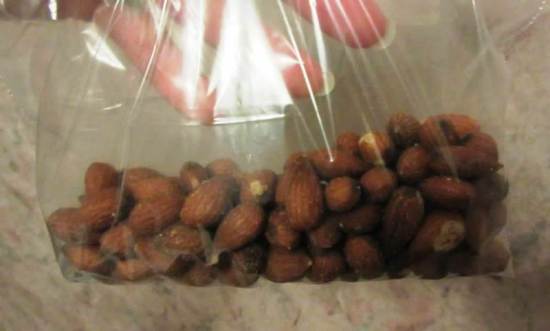 The jar of peanuts is all that remains, and I’ve not cracked it open yet.  Thankfully, I did have the good sense to buy the dry roasted and unsalted variety which will be blah and boring of course (to humans anyway).

So, in a nutshell … I’ve decided to scrap the eat-nuts-to-stay-healthy campaign and go back to my tried-and-true method of simply shoving a tablespoon into the jar, then dragging it back out laden with nutty peanut butter, and getting my peanut fix that way.

Yesterday, since it was the weekend and I had more time to dawdle, I sought out my squirrel pals to share the love with them because, as you know – squirrels just go nuts for nuts.

I realized I had their attention, so I scattered some almonds on the pathway.

But, first the almonds were given the “sniff test” …

… so, would they pass muster?

Well, yes they did … see for yourself.

So many nuts, and so little time! 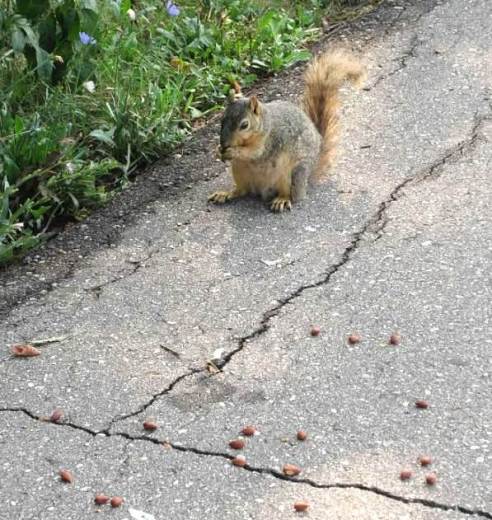 You saw for yourself how my nutty buddies loved those almonds and glommed onto them as soon as they were spread across the asphalt path.  I left my furry friends in nut nirvana to walk another loop, only to return to find they were still noshing on almonds and some kind soul had tossed some shell peanuts into the mix on the pathway.

Around the Park, there were other squirrels that did not get the word about the almond joy, so they got regular shell peanuts instead.

Of course, nuttin’ but the best for my furry pals, and, while treating them, it was a great photo op.  I got a few cute and funny photos – I hope you enjoy them.

This is my first blog and I enjoy writing each and every post immensely. I started a walking regimen in 2011 and decided to create a blog as a means of memorializing the people, places and things I see on my daily walks. I have always enjoyed people watching, and so my blog is peppered with folks I meet, or reflections of characters I have known through the years. Often something piques my interest, or evokes a pleasant memory from my memory bank, so this becomes a “slice o’ life” blog post that day. I respect and appreciate nature and my interaction with Mother Nature’s gifts is also a common theme. Sometimes the most-ordinary items become fodder for points to ponder over and touch upon. My career has been in the legal field and I have been a legal secretary for four decades, primarily working in downtown Detroit, and now working from my home. I graduated from Wayne State University with a degree in print journalism in 1978, though I’ve never worked in that field. I like to think this blog is the writer in me finally emerging!! Walking and writing have met and shaken hands and the creative juices are flowing once again in Walkin’, Writin’, Wit & Whimsy – hope you think so too. - Linda Schaub
View all posts by Linda Schaub →
This entry was posted in Uncategorized and tagged nature, Nuts, Peanuts, Squirrels, Summer, walk, walking. Bookmark the permalink.

65 Responses to Got peanuts for me?